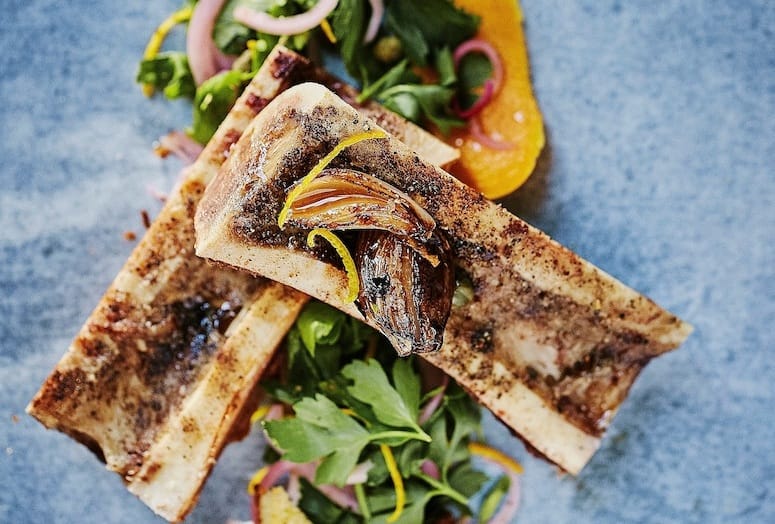 VIDEO: Executive Chef Chris Hora explains how he tackles past and future menus.

Executive Chef Chris Hora is ready to reign in the kitchen at the newly designed Mr. Lyons Steakhouse in Palm Springs.

He's not trying to battle the past and replicate what the former Lyons English Grille used to serve. The iconic restaurant formerly known for its 19th century English décor dating back to the 1940s has already firmly established itself in Palm Springs restaurant history.

His approach? "…by ignoring it completely," he says, "and not trying to replicate something, other than homage to the name.”

Chef Hora has focused on putting his own stamp on things, noting a variety of international influences like Asian, North African and Latin, plus a couple of Chinese techniques blended with California influence.

"I don’t buy things," he says. "I make them. I make everything except cheese and butter. Eventually I will make both.”

Foundation 10 Creative took over the South Palm Springs space from the original owner, David Lyons, and reopened as Mr. Lyons Steakhouse in May. F10 Creative is a collective owned by restaurateur and hotelier, Tara Lazar, the local force behind well-known Palm Springs restaurants, Cheeky's and Birba, as well as Alcazar hotel. The updated design of the Grand Salon, which serves as the main dining room, is credited to Brent Kanbayashi, out of San Francisco.

The 12,000 square foot building includes the updated Lounge, which retains historic touches, such as refurbished chairs original to the restaurant. Bold lighting fixtures, refinished modern wood floors, and a marble slab bar give the space a feel that is both cozy and sleek.

The Grand Salon has been transformed with celadon-toned booths, a wine wall, and a cut-mirrored central ceiling, creating an elegant dining room. Finishing touches such as mirrors and art will complete the two operational spaces of the restaurant.

Unfinished spaces just beginning construction are scheduled to open in phases beginning in October (Seymour’s Speakeasy and the Conservatory), and November (Private Dining Room). Each space will have its own unique feel and function. Seymour’s has been imagined as a dark, intimate, interior bar and lounge hosting a Grand Piano with an outdoor patio fitted with Bocce Ball. The Old Fashioned cocktail lives up to its name with no need for much tinkering. Head to the Lounge to sip this classic mix of rye, bitters, sugar, cherry liqueur and orange peel.

The Conservatory will be the largest dining space, with and indoor/outdoor garden-like design featuring a separate menu with lighter fare and fresh seafood. The Private Dining Room will host business lunches by day and private dining by night, with seating for 18. Monthly wine dinners hosted by visiting chefs are also in the plans for this space. Mr. Lyons will be open all summer and offer pricing specials from the Lounge Menu. Have a seat at the bar and enjoy the Burger served with Bacon-Onion Jam and Seared Tomato on a Brioche Bun.

You can enjoy drinks and a bar menu in the Lounge or full-service dining in the Salon all summer, open Tuesday through Sunday. Step out into the sultry summer nights and stop in to enjoy the newest addition to classic steakhouse dining in the desert.