Painter Fulton Leroy Washington, better known as Mr. Wash, has a goal for his residency at the Palm Springs Art Museum: go big.

Wrongly convicted and incarcerated in 1996 for nonviolent drug offenses, Mr. Wash honed his skills as a portraitist painting his fellow inmates. He became a working artist after then-president Barack Obama commuted his sentence in 2016. “For decades, I could only paint pictures that would fit inside my locker,” Mr. Wash recalls. “Now I’m doing 48 by 60 [foot canvases]. I’m trying … to find the same details at a larger scale.”

Mr. Wash’s experiments in scale align with the Outburst Residency Program’s mission to allow artists space to explore new forms and bodies of work. Mr. Wash shares the pieces created during his month-long stay at the museum in an exhibition on view starting April 21 through July 3. 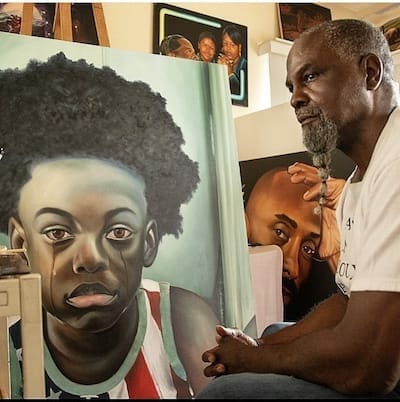 Mr. Wash poses in studio with his painting Targeted Insurrection.

As a self-taught painter, how does your perspective on art differ from that of classically trained artists?

I think I’m a little bit more creative, because everything that I’ve learned comes through experimenting. For every failure, there are also multiple lessons that allow me to move in different directions from a person who’s traditionally taught.

I’m sitting here working on a piece now that has about 30 people. For every little scene and every little person, I’m trying to develop a different atmosphere, and I’m using all that experience from the past, all the failed mistakes, to say, “How do I fix this? Which one of the lessons that I thought was wrong is the right one now?” 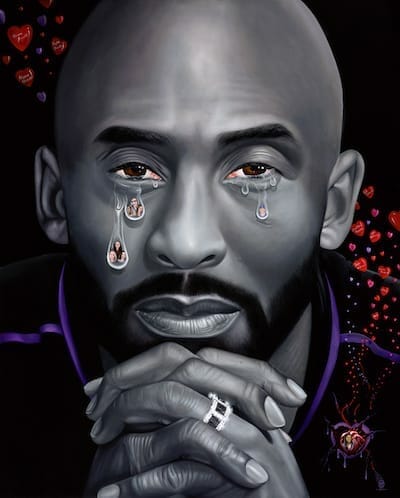 "I want my work to resonate inside of the minds, hearts, and spirit of the viewers to see and understand me as an artist," says Mr. Wash.

In your work as a portraitist, you offer a very intimate and sensitive look into individuals’ lives. What is a particularly meaningful experience you’ve shared with a subject?

Back in the day when [Bill Clinton] was president — I was in prison then — I did a picture of Bill Clinton, Hillary Clinton, and Leonard Peltier. Because my grandmother is an Indian, I grew up knowing [Peltier’s] name. Had no idea that I would be in prison with him. Peltier was accused of killing two FBI agents on the Pine Ridge Reservation. They gave him a life sentence for that.

He declared that he didn’t [kill the agents]. The guns didn’t match. He was an outspoken advocate [against] the mistreatment of the Indians on the reservation.

When I ran into him, he was up for the same thing that I ended up receiving: a presidential commutation of his sentence. At the last minute, when Bill Clinton got indicted, they withdrew his. He had packed all of his stuff, he had given all of his stuff away, and waited, because they had guaranteed that he was going to be released. And then at the last minute, they withdrew, and they crushed that man. I watched it crush him.

So I painted what I felt and what I thought. It was a picture of Bill Clinton in a mirror. [At first,] I was trying to paint [Peltier] and Bill Clinton shaking hands in congratulations. And then the indictment issue came in while we all waiting on him to go home. [In the new version,] Hillary is on the phone, but she’s in handcuffs now. Bill Clinton’s hands are turning into snakes. His fingers became all the venomous snakes of the world, because in the relationship between the United States and the Indians, the treaties were always broken from the American side.

I tried to just paint that story. I really feel grateful to have had the opportunity to meet the person that my grandparents spoke about. 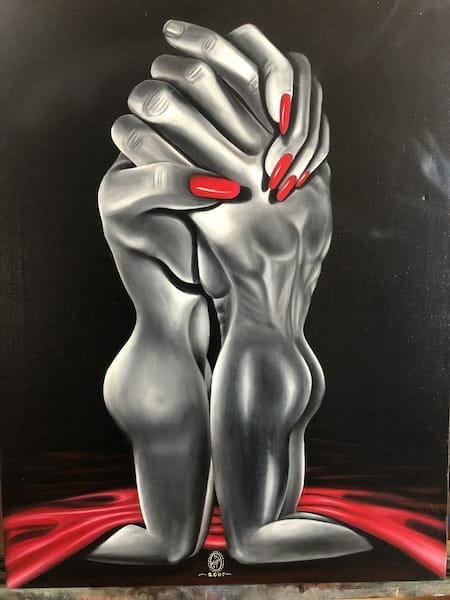 In the past, I created art for my family to tell the story of my separation and why. The other part was for the community to tell their stories.

When I [do] pieces for the public, it’s just pretty much to say, “I feel you. I feel the emotions that [you’re] going through.” I try to paint that feeling into the work.

I want my work to resonate inside of the minds, hearts, and spirit of the viewers to see and understand me as an artist. I [also] want them to understand me as a spirit — that I’m here, not to cause any harm, but to help enhance the experience of life.

And since this lifespan that we have is a very short one compared to the size of the planet, we need to expand out and reach out for others.

Artwork is transforming itself in the digital world through NFTs [non-fungible tokens]. We will be launching my very first NFTs in Palm Springs. It’s going to be very exciting for me to enter into that crypto world.

Responses have been edited for clarity.