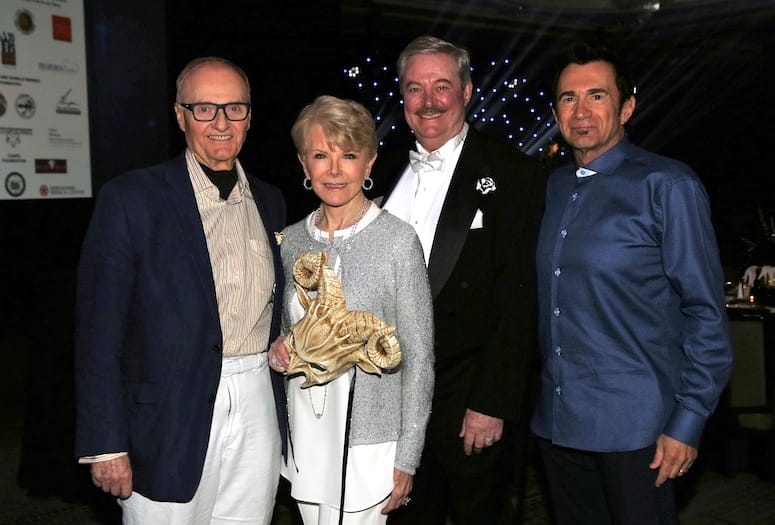 An evening of “Magic and the Zodiac,” benefiting ACT for Multiple Sclerosis and conceived and created by ACT for MS gala co-chairs Marc Byrd, Richard DeSantis, and Nancy Stone, had everyone cheering and dancing.

ACT for MS founder Gloria Greer’s photo flashed briefly on the screen before DeSantis lauded the exercise programs started by his late wife Lynn, who was diagnosed with multiple sclerosis in 1992. The group was founded in 1999 after Gloria’s daughter Norma was diagnosed with the disease and both Lynn and Richard joined the board in 2000.

Honoree Jamie Kabler received the full treatment, including the Rancho Mirage High School Marching Band encircling the tables not once, but twice. Front-table attendees cheered, waving large “Jamie” placards back and forth. Sponsors Helene Galen and Harold Matzner spoke eloquently of Kabler’s service to the community.

“There are givers and takers,” Kabler said. “The takers eat well; the givers sleep well. May you sleep well tonight!”

It seemed guests were attentive to Kabler’s speech as the live auction, which immediately followed, brought in more than $90,000 to fund client programs. The first giver was Sandy Hill, who successfully bid on the Hawaii trip. Other givers and sponsors in the audience were Donna MacMillan (in the best Chinese-zodiac rooster costume ever), Jan Salta, Patty and Arthur Newman, Lori and Aubrey Serfling, and Suz Hunt.