National Geographic Live Takes You Behind the Story 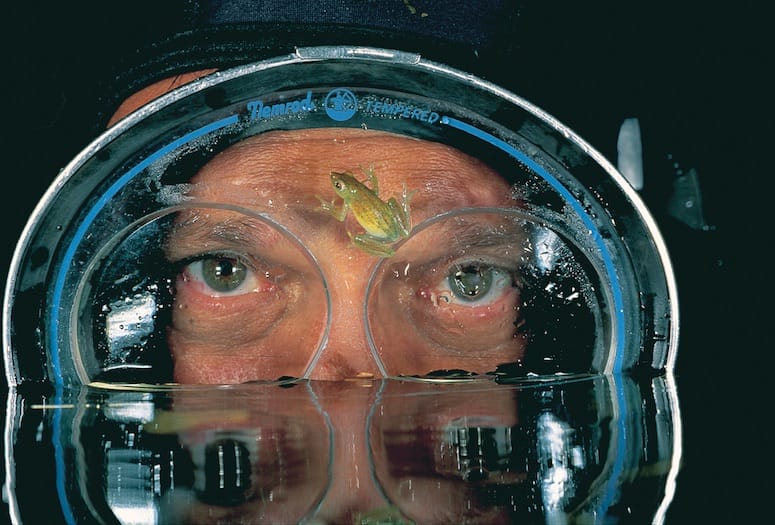 Niagara Falls churns 750,000 gallons of water per second over its ragged cliff, plunging it 170 treacherous feet into a maelstrom of mist and chop. Imagine being inside these falls — and pickaxing up jagged protrusions of frozen mist as water thunders overhead. In January 2015, extreme filmmaker Bryan Smith did exactly that, capturing every thrilling image alongside Canadian daredevil Will Gadd as he climbed the colossal falls’ icy outer edge.

Smith brings these vibrant images and his behind-the-camera account to the McCallum Theatre stage March 18 as part of the National Geographic Live lecture series. Three visually driven talks invite thrill-seeking audiences to travel below Antarctic ice, into the falls, and even to the surface of Mars with breathtaking photos and videos, plus first-person storytelling from the explorers themselves. 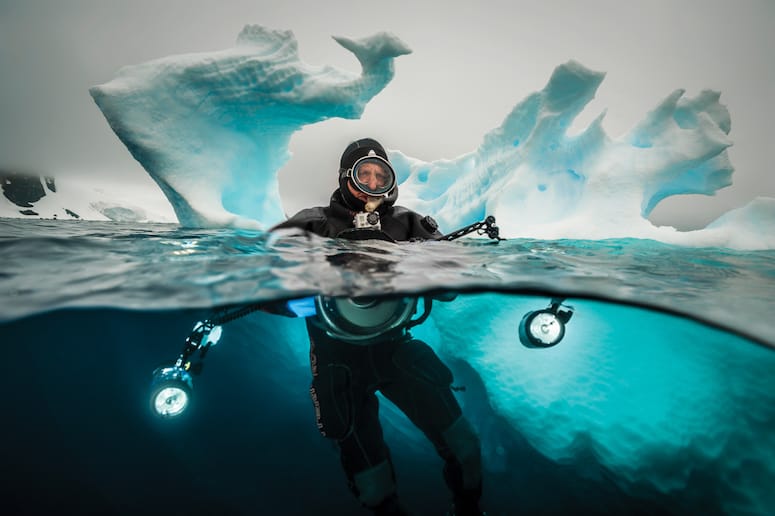 David Doubilet is one of the most prolific National Geographic photographers, recently completing his 75th story for the magazine.

“People don’t necessarily think of the McCallum as a place to see presentations like this, but this is part of what the McCallum is about,” says the theater’s president and CEO, Mitch Gershenfeld. “People have a thirst for knowledge; they want to learn and be captivated by images and experiences that they haven’t had.”

The series has roots in the 130-year National Geographic tradition of science- and adventure-based lectures; this iteration offers 350 events a year in 70 cities throughout Canada and the United States. “We try to ignite the explorer in every single one of the attendees,” says Yulia Boyle, National Geographic senior vice president of global media and experiences. “These are incredibly touching and moving stories of humanity, of cultures, of exploration, of achievement, and of science.”

“All of our shows enlighten and educate but also entertain the audience,” says Valerie Perry, who oversees programming and production at National Geographic Live. “It goes beyond the magazine, and what you see on Instagram or on the National Geographic Channel,” she says. “The explorers are there to share their personal stories, and then afterward, they interact with the audience.”

Each show includes a moderated 20 minutes of questions and answers, but the lecturers “always go out to the lobby to answer any remaining questions that people have, or get their picture taken with them, or talk about, say, ‘If you want to climb frozen Niagara Falls, how do you do it?’ ” Perry says. “I’ve seen speakers stay there until every single person has gone home.” 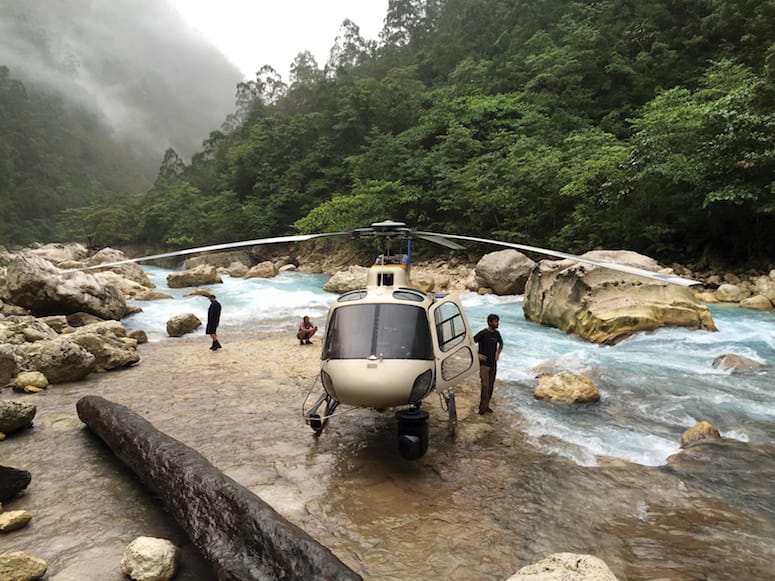 Gershenfeld booked the shows after hearing buzz from fellow theater managers and traveling to Arizona and Washington, D.C., to experience it for himself — complete with a lecture on parasite wasps and how they infect cockroaches. The show was “kind of gross and captivating at the same time,” he says, and he was hooked. For the desert debut of National Geographic Live, Gershenfeld picked broadly appealing shows, but he isn’t ruling out booking future lectures that feature creepy-crawlies. “Nat Geo does a lot about snakes and spiders and bugs and things that kind of creep people out, yet people are still mesmerized by the images,” he says. “So I wanted to start the first three with ones that I thought would be generally interesting. Maybe if we get a few years down the road, I might try some snakes and spiders.”

“He has videos of experiments that they were doing — some that went well, some that didn’t go so well — and shares what they learned from that, as well as imagery of what the Mars rover is capturing,” Perry says. Audiences will hear his firsthand accounts of the Mars missions, along with details about the next steps for space exploration.

“It goes deeper than what appears in the magazine ... you get the story of the person ... what was that experience like to actually go there?”Valerie Perry 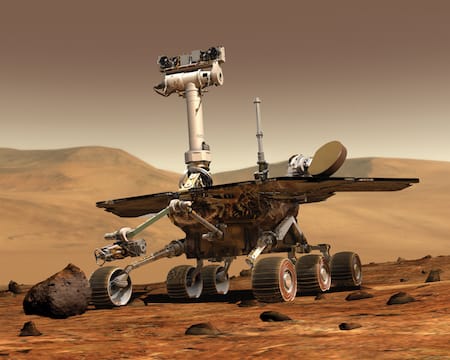 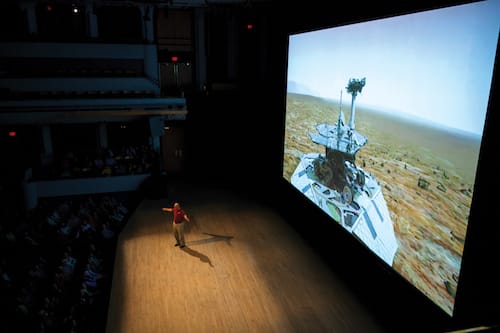 In the first National Geographic Live show (Jan. 21) Kobie Boykins of NASA’s Jet Propulsion Laboratory presents a gripping account of a mission to study the climate, geology, and conditions for life on Mars.

“Coral Kingdoms and Empires of Ice” arrives on Feb. 18, featuring renowned husband-and-wife photographers David Doubilet and Jennifer Hayes. Doubilet is one of the most prolific National Geographic photographers, recently completing his 75th story for the magazine. “His partner, Jennifer Hayes, is a photographer, but she’s also an aquatic biologist,” Perry says. “They can really compare the artistry of underwater images with science.”

Their presentation introduces audiences to the coral triangle in Kimbe Bay in Papua New Guinea, teeming with life, then moves to the mysterious depths below the Antarctic ice. Next, they bring audiences to the Gulf of St. Lawrence to discuss their experiences with whales and their up-close encounters with harp seals.

“It goes deeper than what appears in the magazine,” Perry explains. “Obviously David and Jen have had a lot of stories in the magazine over the years, and you can read the articles, but by coming to the event, you get the story of the person who captured this image. What was that experience like to actually go there? What were the pictures that didn’t make it in? What were the stories that didn’t make it in? It’s a deep dive behind the scenes.”

“Bryan is an adventurer in his own right. And he has that added challenge of being a filmmaker while he’s there,” Perry says. “He started as a kayak guide. He picked up a camera along the way and began making whitewater-kayaking films.”

He’ll not only discuss paragliding and ice climbing in the Canadian Rockies and Niagara Falls, respectively, but also the difficulties of documenting extreme exploration. “Even though Will was the one climbing Niagara Falls, Bryan had to figure out, ‘How do I document this? I also have to climb or to descend to make sure I get that shot,’ ” Perry says. “Audiences get to see the story of the expedition, but they’ll also get to see from Bryan’s point of view and the challenges that he had to solve to capture it. That’s why it’s called ‘Capturing the Impossible.’ ”

Gershenfeld hopes the series resonates so he can expand it in upcoming seasons. “I think everyone will be captivated by National Geographic Live,” he says. “There are some amazing minds at work there, and we’re lucky that we have them to help us understand and learn.”