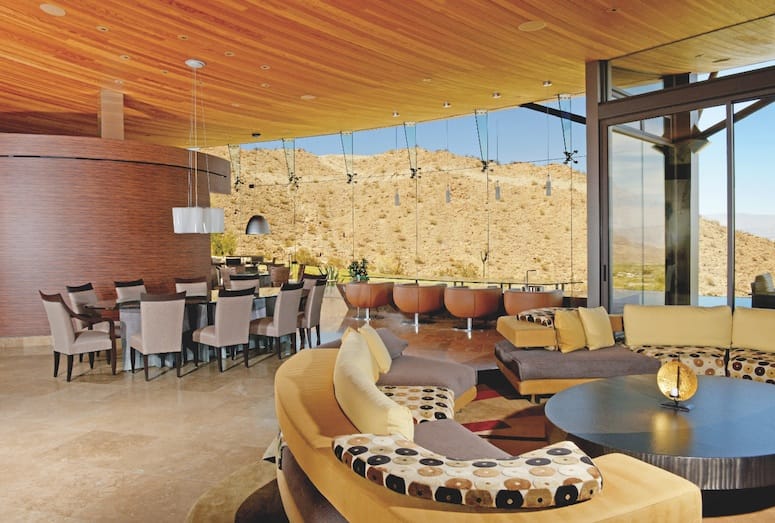 When Rancho Mirage–based architect Narendra Patel envisioned the design for a bold, sculptural home that would sit gracefully alongside the nearby mountains and integrate into the landscape, he was standing in the middle of a large, undeveloped lot in Palm Desert’s Bighorn Golf Club.

The design came to him immediately.

The site “was sort of blossoming out of the desert,” he says. “So that’s how I conceived the house — as a flower blossoming. The roof is like the hovering petal of a flower, similar to one you’d see on a cactus.” It’s little wonder, then, that Patel named the home Desert Blossom.

“It’s not a traditional layout but more of an interactive one,” Patel says. “It’s designed in such a way that whether the homeowner is the only one in the house or has 50 guests, the house will function and adapt automatically.” His client, an insurance company executive who commissioned the 6,000-square-foot residence with her former husband, loved the idea and the home’s seamless flow from indoors to outdoors.

“We told him we wanted a house with a master bedroom, two offices, and two guest rooms, and to maximize the view — and that was about it,” says the homeowner. “And this was what he came up with.”

The homeowner was also a big fan of opening up the main rooms.

“We lived in a pretty big house in the Los Angeles area that had a formal living room, and we lived there for 17 years — and I think we used the living room once,” she says. “I liked the idea of a great room, and this has worked out well.” The home also has a 1,200-square-foot garage. The home’s courtyard entry offers a preview of what lies beyond the front door. There’s a water feature along with a soothing combination of materials that play off of one another — a soft slice of outdoor fabric, strong Arizona flagstone, and a Douglas fir ceiling that complements the copper-edged roof.

“It gives a really great experience before you even enter the house to go through the courtyard space,” Patel says. “It’s a sequential experience that I had not done before. The idea is to have the experience of these contrasting materials, but in harmony together.”

This imaginative approach continues at the glass-walled entrance. Here, you’ll find a door handle (essentially a long piece of sculpture) designed by an artist under Patel’s direction. What you won’t find is the framing typical of most homes.

“The whole concept of this inside-outside design is that I didn’t want to see any frames,” Patel says. “I wanted it to be flawless, just the glass, everything else is hidden. A purity of architecture is what I wanted to introduce in this house.”

John Lautner — a modernist architect whose works include the Elrod House in Palm Springs, made famous in the James Bond film Diamonds Are Forever — has been an influence on Patel’s work.

“I found that his distinctive application of the principles of organic architecture had common ground with my thinking,” says the architect. “Even though I was influenced by John Lautner, and loved his architecture, I purposely did not want to copy any of his designs because I believe in pure idealism and wanted to go beyond modernism like he did.” Patel’s affinity for natural elements is on display everywhere in the home, and the materials he chose move effortlessly from outdoors to indoors. The travertine floor is the same inside and out, and the same flagstone can be found on both the exterior and interior walls.

“I always look at natural elements for design inspiration,” he says. “When I look at rivers, oceans, waves, ripples in the water, clouds, storms, and many other organic forms, I do not see anything resembling squares, cubes, rectangles, or straight lines. It just seems natural to me to create fluid and organic spaces.”

“Earth, stone, metal, fire, and wood were the integral materials in the design of this house,” he adds. As an example, he cites the stone on the fireplace, which is from a fossil mine in Morocco. “When I came across this rare stone, it just seemed a perfect fit for this home, where fire, Douglas fir, and this fossil stone all come together in harmony with nature.”

“When people come over and want a tour of the house for the first time, they all ask me about how we chose the materials,” says the homeowner. “And my answer is, ‘I just said yes.’ [Patel] really narrowed the choices down, and often there were two or three things to choose from, but basically on a lot of it, I trusted him. And when I saw most of the stuff, it was terrific.”

Patel’s love of organic forms can also be found in the curvilinear nature of the furniture, walls, and even the ceiling. “It all stems from my original philosophy of living space,” he says, explaining that he believes that organic spaces are more appealing to people and that our innate attraction to them begins in that ultimate organic space, the womb. “And as you grow up, you always get attracted to natural things. You want to go on vacations to the beach, or the mountains, or the forest — always being attracted to natural things is a human tendency. And if we apply that tendency into a living space, then it’s more appealing and more conducive. It just has a spiritual connection to where you live and how your mind connects to it.”

Patel is also known for integrating green architecture into his designs. Although there’s a lot of glass throughout this house, he used a high-efficiency product, designed  with a special non-reflective coating on the outside that doesn’t interfere with the views yet blocks the entrance of heat and ultraviolet light. The house was also oriented in such a way that it receives no direct sunlight.

“The way the overhang is designed, the sun just stays on the patio,” he says. “We use a lot of passive features for energy savings. Anybody can employ aggressive features by spending money, but saving energy by not using resources and money is more important.”

All of these elements have come together to create a remarkable house that visitors have referred to as a living sculpture. And then there’s that incredible view.

“My two favorite times of the day are early in the morning when the sun is coming up, and as the sun goes down and you see the shadows on the mountains,” says the homeowner.

“Desert Blossom is a home that’s an expression of unapologetic exuberance, a design freedom that overthrows the conventional modernism,” says Patel. “An organic opulence that mated nature and technology in the service of human habitation.”