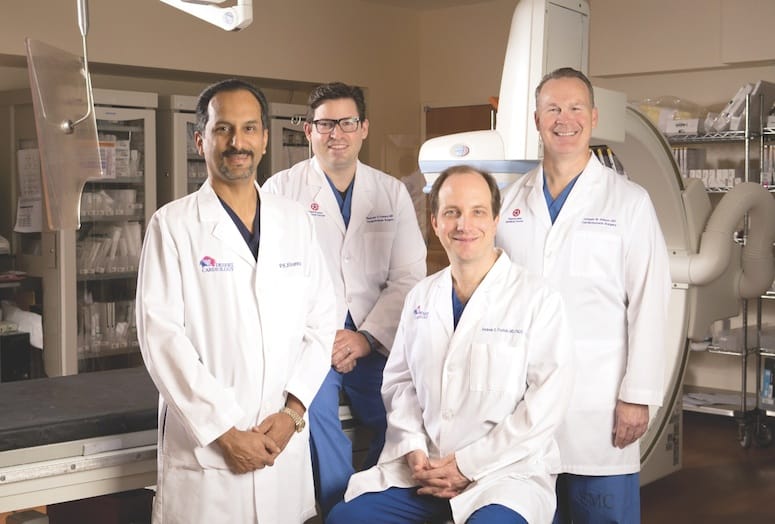 For elderly patients with aortic stenosis, too frail to withstand hours of invasive open heart surgery, there is now hope for a better life with the introduction of the transcatheter aortic valve replacement (TAVR) procedure that was recently introduced at Eisenhower Medical Center in Rancho Mirage.

EMC began offering the procedure in April; by late May, five patients had been monitored and evaluated for several months, and then had the minimally invasive catheter procedure.

For John Biggi, 89, of Portland and Palm Desert, TAVR has been a blessing. “Before I had it, I couldn’t walk 10 feet without being out of breath; I was worn out,” he says. “Now I can help out around the house. I feel wonderful.”

“This is an enormously exciting, major advancement in medicine,” says interventional cardiologist Dr. Andrew Frutkin, who leads the TAVR team with Dr. P.K. Khanna. “To be able to bring it to Riverside County and the Coachella Valley has taken an enormous amount of effort. But what is really powerful is the effect TAVR has on the patients’ lives.”

Aortic stenosis, or the calcification and impairment of the leaflets (flaps) in the heart’s aortic valve, is “a condition that is part of the process of aging,” Frutkin says. He notes that about 1.5 million people in the U.S. suffer from it, with up to a quarter of that number showing no symptoms of the disease.

Prior to the TAVR procedure, the patient’s evaluation includes a battery of standard heart tests (EKG, echocardiogram, ultrasound, and CT scan) and measuring the aorta.
“We know the patient and everything about their heart before the surgery,” Khanna says.

Once in the catheterization lab suite that has been set up for the TAVR procedure, a team of 15 to 17 professionals are on hand, including two cardiothoracic surgeon, Dr. Matthew Powers and Dr. Joseph Wilson, in case more traditional surgery is required.

Unlike open heart surgery, the TAVR procedure is performed through small incisions in the groin area with minimal blood loss. A series of catheters slowly enlarge the femoral artery to allow the new valve to be moved into the heart, precisely positioned, and deployed in place without having to suture it into the heart.

“It’s a very delicate procedure,” Khanna says. “But with the results we are seeing on the sickest patients, we are hoping that in the future we will be able to begin bringing TAVR to patients who have more moderate AS and improve their lives at an earlier age.”