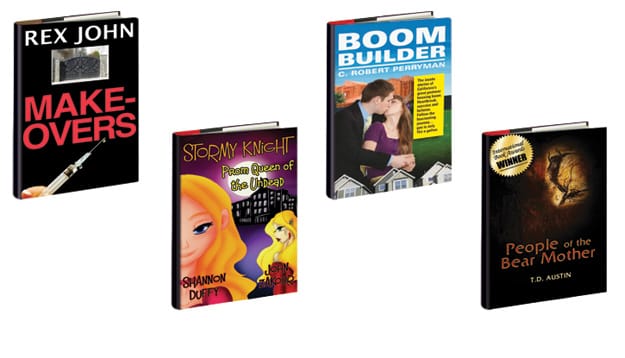 REX JOHN of Palm Springs has published a thriller titled Makeovers (CreateSpace). Born to power and privilege, Carson Kirkpatrick wants to change the world one person at a time. He successfully transforms Mark Boston, a law school dropout he finds passed out on a park bench, into a successful author. Janet Musgrave is a more reluctant student in Kirkpatrick’s “school of life.” As their lives intersect, Carson’s hidden identity begins to emerge.

SHANNON MARIE DUFFY of Palm Springs has co-authored with John Zakour of New York a young adult novel titled Stormy Knight: Prom Queen of the Undead (Blue Leaf Publications). The story involves a high school student who is half vampire queen and half mortal. Overall, Stormy thinks she’s doing a pretty decent job of fitting in, at least until the undead begin popping up around her school.

T.D. AUSTIN has published People of the Bear Mother (Strategic Book Publishing), the tale of a young woman’s spiritual journey of self-discovery into the depths of Europe’s oldest painted cave: the Chauvet Cave in the south of France. A Palm Springs resident, Austin taught college-level courses and conducted academic research in sociology and anthropology before becoming a fiction writer.

C. ROBERT PERRYMAN has published Boom Builder (Booklocker.com), a novel based on California’s postwar home-building boom, particularly in Orange County and the Coachella Valley. The book tells the story of the son of a custom homebuilder and his romances, successes, and failures.