While the local culinary scene is punctuated with scads of classic restaurants — those places that have developed a loyal patronage over decades, with menus that seem to be frozen in time — it’s also always evolving. That’s been deliciously apparent over the past year as many post-pandemic hot spots have emerged, adding fresh sensations and experiences to the smorgasbord of desert dining.

Inside a cheery but unassuming space in a strip mall located near Old Town La Quinta, Beautiful Day chef and co-owner Justin Jenkins is stealthily turning meat eaters into plant lovers with a veggie-forward menu that features dishes like a mushroom shawarma tartine, vegan poke bowl, and roast beet Reuben. (As the menu cheekily notes about the latter: “Not a typo!”)

“I’ve been playing with beets for years and love finding ways to create unexpected textures and flavor profiles with them,” Jenkins says. 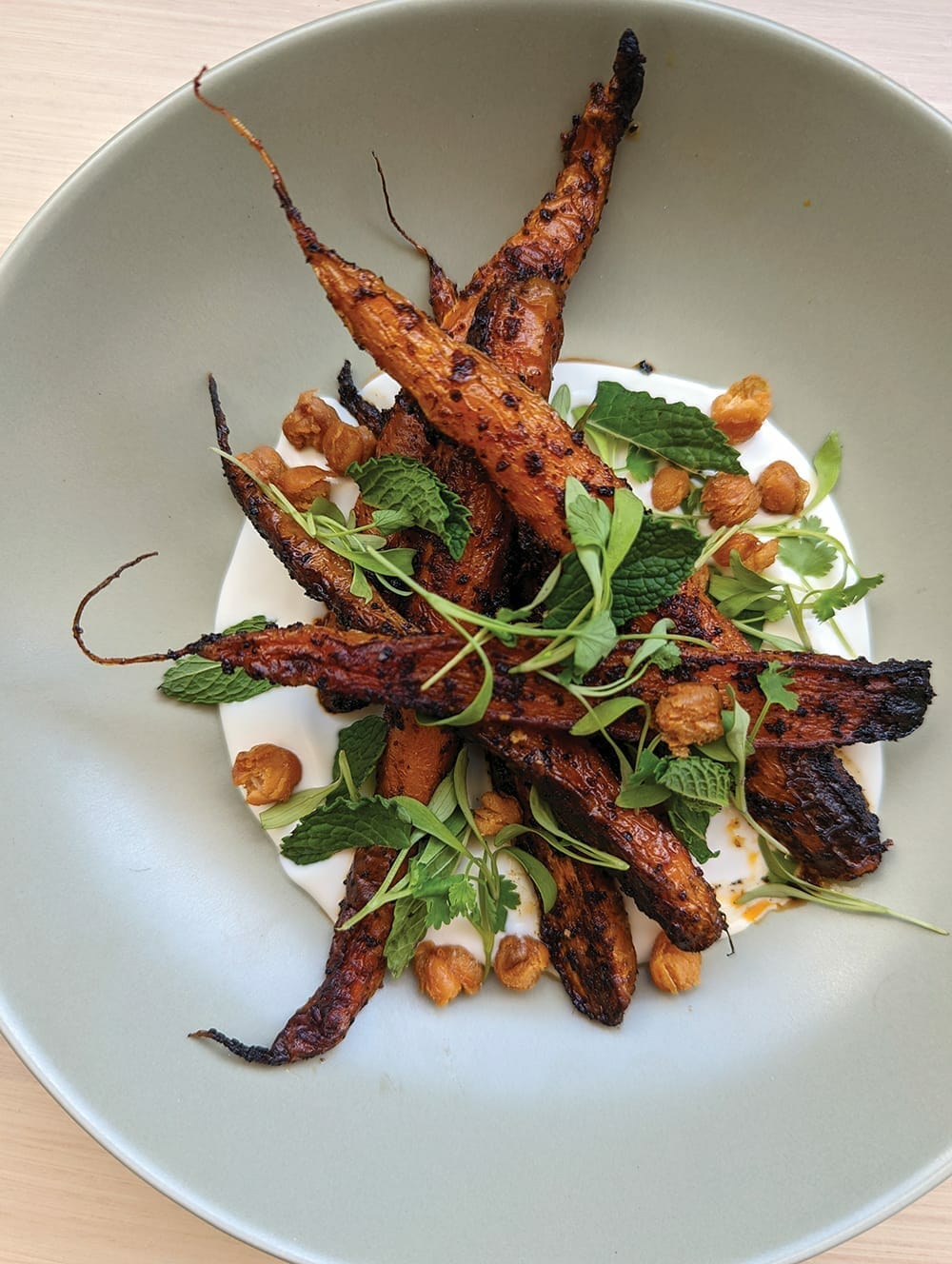 “I’m a huge fan of the classic Jewish deli pastrami sandwich, and I wanted to create something with that in mind that anyone could enjoy, regardless of their eating style. The first step was getting the texture right.”

Jenkins starts by roasting oversize organic beets that have been rubbed with salt and cracked pepper. Afterward, they’re peeled and rubbed with mustard and a proprietary blend of pastrami spices. Then, he dehydrates for about 18 hours. “Drawing out the excess moisture gives them a toothsome texture,” Jenkins explains, “and keeps them from falling apart the way regular roasted beets would.”

The beets are then sliced and tossed with whole grain mustard and a bit of fresh black pepper before they’re seared on a hot plancha and piled atop Larder Baking Co. sourdough along with housemade sauerkraut and vegan Russian dressing. “This sandwich has become a real fan favorite,” Jenkins says, “even among hardcore carnivores and those who profess no love for the humble beet.” Not to fret, unwavering meat lovers. Beautiful Day serves proteins, too. 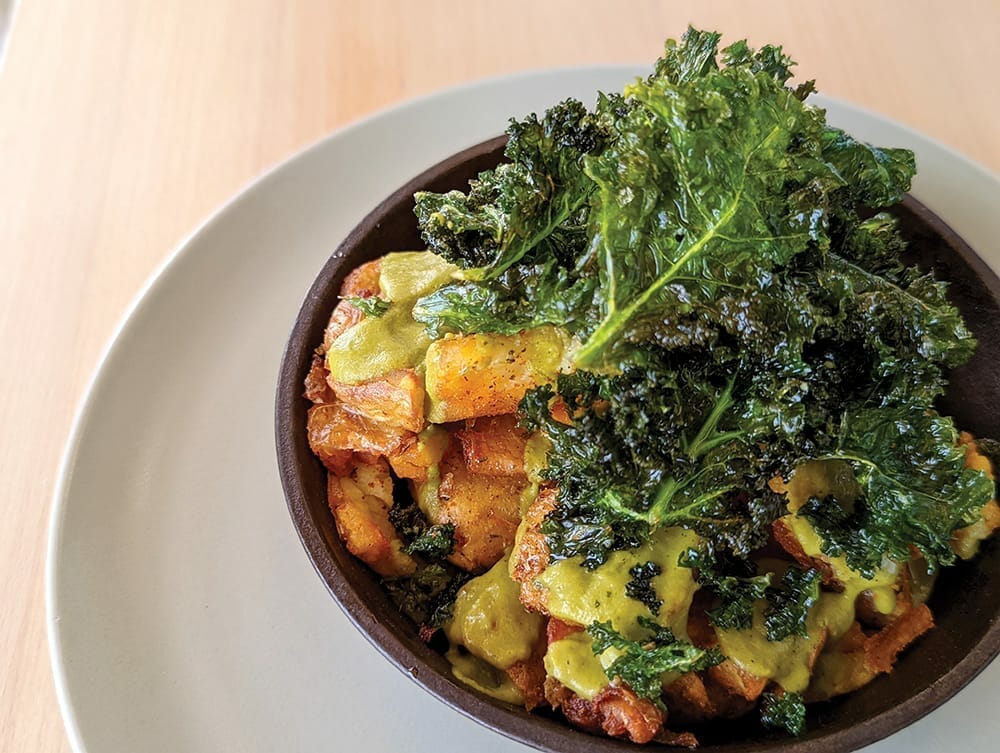 After serving innovative Mexican dishes in pop-up locations around the valley, Hoja Blanca chef Omar Limon and his sibling co-owner, Arnold Limon, have taken up residence in the evenings at Café La Jefa’s outdoor patio at Flannery Exchange, a mixed-use property in the Uptown Design District. Do not expect Tex-Mex staples like burritos or fajitas. Instead, Limon’s cunningly composed cosmopolitan fare feels like it teleported straight from Mexico City, whether it’s red chorizo quesatacos or octopus-topped tetela.

The showstopper is Omar’s rendition of aguachile, a ceviche-like creation of Sinaloan origin. He juxtaposes mostly savory flavors with a bit of sweetness for an umami sensation. “My take on this dish came from trips to Baja California these past few years,” Omar explains. “Baja has pioneered a new type of cuisine known as Baja-Med, where a blend of Mexican, Asian, and Mediterranean influences have created new interpretations of all three flavor profiles.” 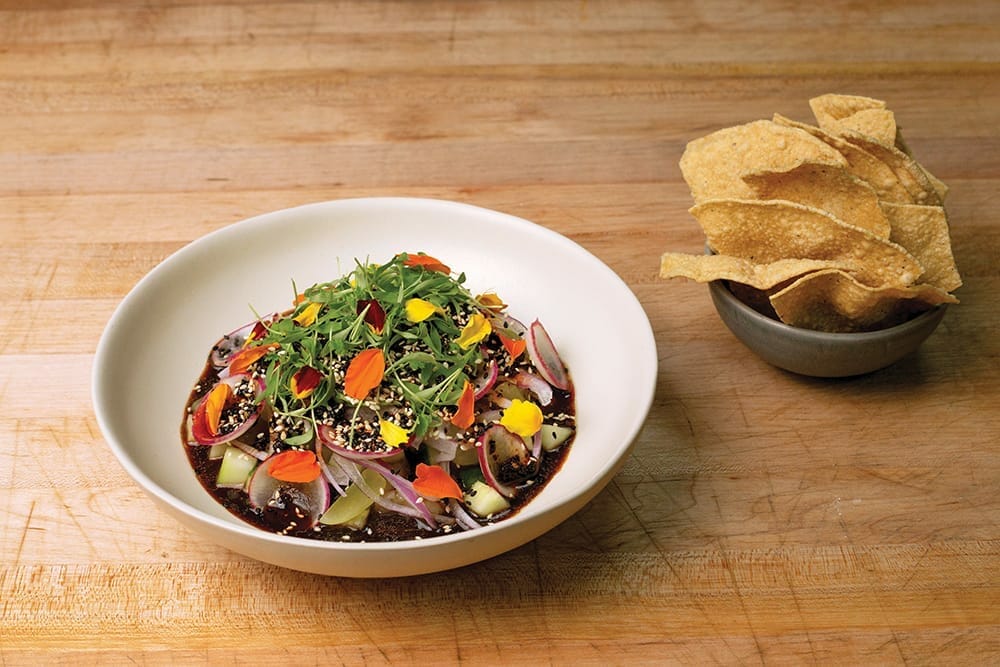 For his aguachile, Omar submerges shrimp in a cold, spicy broth of lime juice, tamari soy, and sesame oil with a blend of sesame seeds and housemade salsa macha. “We then top it off with sliced cucumber, red onions, radish, grapes, and serve it with a side of tostaditas.”

The first thing that Palmina by Puglia co-owner Patrick Abbate wants everyone to know about his restaurant is that it’s an Italian — not Italian American — establishment. “All the food that we do is authentically Italian,” attests Abbate, who opened his Palm Springs outpost early last year after operating in Lake Arrowhead for more than five years. “The Italian Americans expect stuff like fettuccine alfredo and chicken parmigiana. These are not our dishes. I do not know them.”

Instead, chef Antonello Zito cooks up bona fide pizzas and pasta on a constantly changing menu. The most spectacular special is the jaw-dropping (and potentially hair-singeing) carbonara that’s prepared tableside. “We basically do a carbonara show where a cart comes out to the table with a pecorino Romano cheese wheel. Then, we add egg yolk, black pepper, and pancetta.” For a hit of warmth and drama, the wheel is ignited with grappa.

“The hard part isn’t sourcing the ingredients,” Abbate says. “It’s putting them together. For instance, the egg yolk: You want to cook it, of course, but not too much because then it’ll be like scrambled eggs. I was actually just in Rome and ordered carbonara that was like scrambled eggs. If that’s happening in Rome, you know it’s a problem.”

Other unique offerings include an octopus ragout, salami pizza, and a pierogi-like Sardinian pasta dish called culurgiones. “We have to make it from scratch,” Abbate says. “It’s fresh pasta stuffed with mashed potato and cheese, and we serve it with butter and sage. You won’t find it anywhere else.” 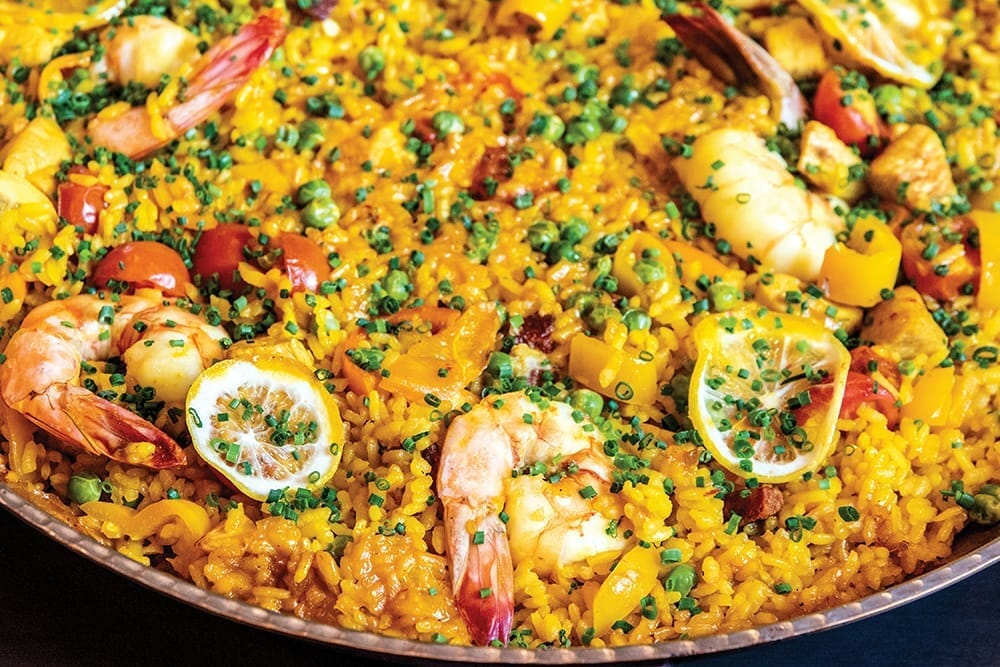 Inside a historic adobe at The Paloma, a recently opened resort, Gardner and executive chef Daniel Felix transport diners to Valencia, Spain, with unapologetically authentic (and sometimes difficult to pronounce) takes on tapas and paella, the rice-centric dish imbued with earthy notes and a generous amount of protein. Many of the dishes rely on local ingredients, such as dates stuffed with chorizo and empanadas laced with locally grown chiles.

For his paella, served straight from the massive pan, Gardner was inspired by the history of the iconic dish. “The origin of paella dates back over 1,200 years, after the Moors introduced rice to Spain,” Gardner explains. “One of those places that was first influenced was Valencia, being that it was one of Spain’s main ports.”

Sol y Sombra’s signature paella tierra y mar marries chunks of chicken, shrimp, chorizo, and serrano ham with toasted bomba rice. “We knew this was a must-have in our menu,” Gardner says, “and we couldn’t wait to share our version of the dish with our community.”