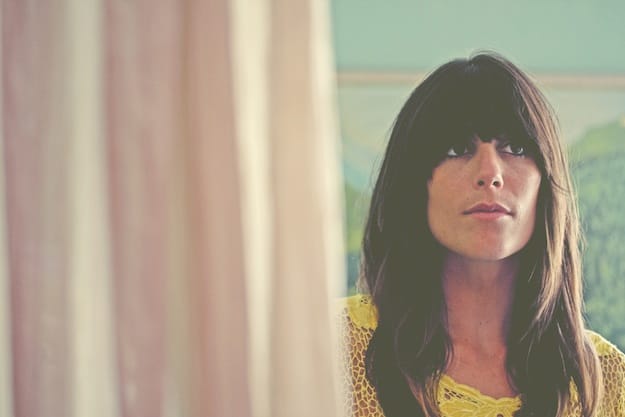 I remember driving down the streets of Los Angeles sometime in 2012 and marveling at the image of a svelte, brunette model — mid-hair toss — gripping a microphone and looking outrageously fierce in a pair of school bus-yellow corduroys and a chambray button-up in what was, the latest Gap ad.

After temporarily contemplating getting the outfit for myself, my next thought was, “What a cool-looking chick.”

That “cool-looking chick” is Nicki Bluhm.

The San Francisco-based performer is the wife of Mother Hips singer Tim Bluhm. She’s also the front woman of Nicki Bluhm and the Gramblers. The Internet is alive with a number of Bluhm’s innovative music covers including the viral sensation “I Can’t Go for That (No Can Do)”, originally performed by Hall & Oates.

When Madison Avenue came calling in 2012 — by way of sportswear giant, The Gap — Bluhm went along for the ride and landed in a national ad campaign that took her from the stages of small indie venues, to instant name recognition among music lovers, pop-culture fanatics, and fashion bloggers.

“I think people want to see the truth in music and in fashion,” Bluhm says of her foray into high glamour. “Fashion meets function – it’s got to be functional.”

Up next for the singer is a full-length, self-titled album slated for release Aug. 27. In support of the release, Bluhm is slated to play a collection of dates that will take her up and down the Pacific Coast, including a sold-out show in her hometown.

Then, it’s off to the Coachella Valley, where she’ll dazzle onstage Aug. 28 at Pappy and Harriet’s.

“I love playing Pappy’s,” Bluhm explains. “I started going out to Pioneertown to see my friend Arabella Harrison. She’s a San Diego musician. She’s played up there a lot with her band, Bartender’s Bible. She started bringing me up there 10 years ago. You start looking at the pictures on the wall and the wear on the floor. It’s definitely a special place.”

Bluhm’s life partner will also be on tour during that time, making the rigors of the road a little less taxing. Two musicians in a relationship often elicit the occasional giggle and perhaps a judgmental stare or two from conservative eyes. But the Bluhms have patented a successful formula, playing and traveling together.

“You know, it’s a happy medium just figuring all that out,” she says. “We’re both really passionate about music and it’s kind of an amazing thing to show someone you’re married to. It’s definitely challenging, but it’s also helpful at times having someone who understands this lifestyle.”

While married life provides a strong foundation, it’s Nicki’s own enviable talent and ever-expanding fan base that keeps her going. Her career continues to careen toward the stratosphere, giving her much to aspire to.

“I’m still sort of young in my songwriting career, so I guess a lot is still to be seen,” she muses.

Experience Nicki Bluhm and the Gramblers in person when they appear at Pappy and Harriet’s Pioneertown Palace, 53688 Pioneertown Road., Pioneertown. (760) 365-5956; at 8 p.m. Aug. 28. For more information, visit www.pappyandharriets.com