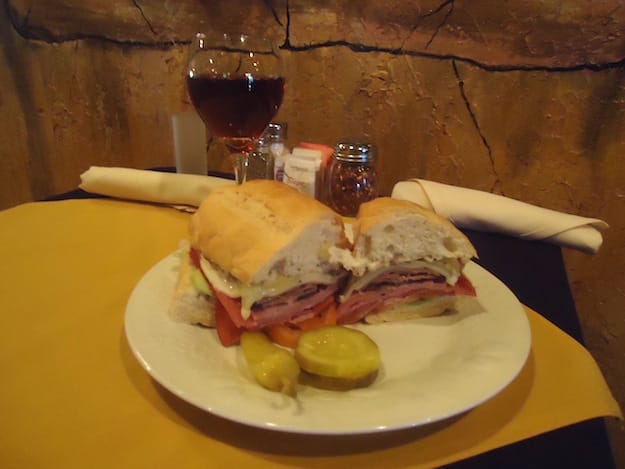 If you’ve lived in the desert for awhile you know that restaurants come and go all the time.

But some, like Nicolino’s Italian Restaurant, which is the oldest Italian family restaurant in the Coachela Valley, have real staying power.

“My grandkids are working here now as servers and cashiers, so we’re on our fourth generation and we’re really proud of that,” says owner Mark Carnevale. “We still run this like a small family business. We’ve really held true to our recipes and our beliefs.”

It all started back in 1969 when Mark’s father and mother, Nicolino and Emilie, and brother, Michael, moved to Palm Springs.

“My father had been coming to the desert for years and this was always his dream spot to open a bakery,” says Mark.

Nicolino and Sons quickly became renown for their bread. As the business grew, the family added an Italian deli and market which soon became a magnet for celebrities.

“We would deliver to Frank Sinatra’s house all the time,” says Mark. “Mama Sinatra would order special olive oil and sometimes Frank would stop by at 3 a.m. when pop and I were baking to pick up several loaves of Sicilian bread.”

“One time we were remodeling the deli and my dad asked me to move one of the gondolas [a shelving unit for groceries],” adds Mark. “I realized I was rubbing my back up against someone and when I turned around it was Robert Wagner. He had Natalie Wood with him, but he got right down there and helped us move the gondolas and set up the deli for the day.”

Mark also remembers the time Sonny Bono, who was a regular customer, stopped by in 1974 for a special event.

“My dad had made the world’s largest sandwich, 104 feet long, and Sonny auctioned it off for charity while holding my daughter in one arm and Chastity in the other,” says Mark.

And watching the recent Liberace biopic, Behind the Candelabra, reminded Mark of the days when he used to deliver all kinds of cold cuts to the pianist’s home. “He was a super polite, really nice guy,” says Mark. “Those were were some pretty cool times.”

In addition to plenty of pastas, pizzas, soups, and salads, the lunch menu includes Nicolino’s Fine Family of Sandwiches.

“Back in the day when The Godfather was released, my dad had a lot of fun coming up with names like Deal You Can’t Refuse,” (salami, roast beef, ham, provolone, swiss cheese, peppers, tomatoes, and lettuce) and Godmother (mortadella, provolone, ham, salami, lettuce, tomatoes, and Italian dressing),” says Mark.

While Mark notes that they add and subtract dishes from the menu several times a year, their extensive dinner options include what he calls “our home-run dishes,” such as spaghetti and meat sauce, Italian sausage and peppers, eggplant parmigiana, and chicken piccata.

Nicolino’s also makes all their own desserts including cheesecake, carrot cake, and strawberry shortcake with scones.

It all adds up to a great recipe for success, and as Mark likes to say, “We make it good, we give you plenty, and we don’t charge a lot.”

Note: Nicolino’s Italian Restaurant will be closed from July 20 to Aug. 31.