Pairing rock bands with orchestras in both the recording studio and in live settings is a relatively common practice these days. But 50 years ago, when The Moody Blues were approached by Decca Records to record a “rock version” of Dvořák’s 9th Symphony, it was considered to be a novel — and even risky — idea.

The Moody Blues had other plans, however, and along with conductor Peter Knight and The London Festival Orchestra, they put aside the Dvořák concept and instead went on to create the original seven-track song cycle known as Days of Future Passed.

The rest, as the saying goes, is history.

Days of Future Passed, which was released in November 1967, expertly fused sweeping orchestral movements with the envelope-pushing rock of those heady musical times. And two of the album’s most enduring tracks, Nights in White Satin and Tuesday Afternoon, have been fan-favorite staples in the band’s live repertoire ever since.

“We didn’t know it at the time,” marvels Moody Blues drummer Graeme Edge. “I think it’s an example of ‘ignorance is bliss.’ If we had known how impossible it was, we wouldn’t have done it!”

To celebrate the album’s golden anniversary, The Moody Blues will perform Days of Future Past in its entirety and in its original running order for the first time ever on their upcoming 28-date summer tour. And Greater Palm Springs residents literally get to see it first, as the Days of Future Passed – 50th Anniversary Tour commences June 3 at Agua Caliente Casino Resort Spa in Rancho Mirage.

Besides being The Moody Blues’ founding drummer, Edge also happens to be band’s resident poet. He’s the man who wrote the spoken-word ending of Nights in White Satin that’s titled, Late Lament, the official name of the “Breathe deep the gathering gloom” segment that carries the Justin Hayward-penned song to its dramatic conclusion.

Palm Springs Life called Edge shortly before the 50th Anniversary Tour got underway to discuss how it feels to play the Days album in full, meeting Frank Sinatra but just missing Elvis, and his experiences driving up and down the Pacific coastline in an RV.

PSL: Your appearance in the desert will actually be the very first time you’ve ever played Days of Future Passed from beginning to end in front of an audience.

Graeme Edge: Absolutely, yeah, And there are three songs from it that have never, ever actually been played by us. 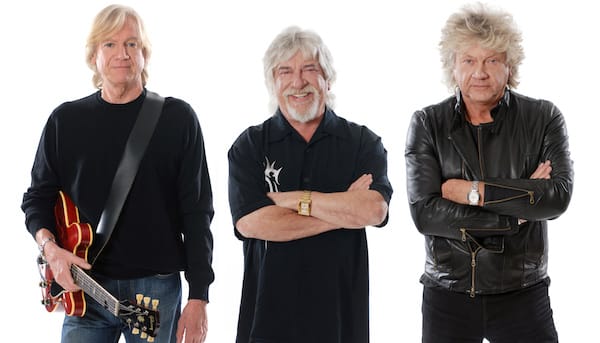 PSL: How did it feel revisiting the album’s material to get ready for this tour?

GE: It’s been quite amazing! About a month ago, I started putting the album through my cans [i.e., his headphones], and I played my electronic drum kit right along with it. I was amazed that, after 50 years, I knew all of the songs.

PSL: What song do you enjoy playing the most from that album?

GE: I like The Sun Set [the first section of the song called Evening]. I like the desert feel to that one. It all feels like [Maurice Jarre’s score for] Lawrence of Arabia.

PSL: The album has two poetic bookends you wrote — Morning Glory at the end of The Day Begins, and Late Lament at the end of Nights in White Satin. I’d say those are two of the most iconic spoken pieces in rock music.

GE: I don’t think about it too much, because that way lies to a bloated ego. I’ve had other people do it to me, and I know what I think of them. They’re very self-centered.

PSL: What were your personal impressions of coming to Southern California for the first time in 1968, when the band was here supporting In Search of the Lost Chord?

PSL: Did you ever think much about all the Palm Springs lore related to Frank Sinatra and The Rat Pack?

GE: We thought about that, yes, but we thought of them more being in Las Vegas. I went there three times to see Frank Sinatra, and once to see Sammy Davis Jr.”

PSL: Did you ever meet or speak with Frank or Sammy?

GE: I did meet both of them because we had the same promoter, Jerry Weintraub. I also went to see Elvis Presley, again in Vegas. I was talking with Col. Tom Parker [Elvis’ manager], and he said, ‘Come on up to my room, and you can meet him.’ I’ve had people up to my room when I’ve been on the road who have turned out to be boors, and I didn’t want to do that to him. So I said, ‘No, but thank you.’ I figured since we also had the same promoter that I’d be bound to run into him — but then, of course, he died three or four months later [in August 1977], so I never did get to meet him.

PSL: Ah, that’s too bad. Frank Sinatra never covered any Moody Blues songs, did he? I would have loved to hear him sing Tuesday Afternoon, or even Late Lament.

GE: He never did, but his treatment of that would have been… (pauses) wow. And then he would have said [affects raspy American voice], Pretty deep, punk! (both laugh heartily)