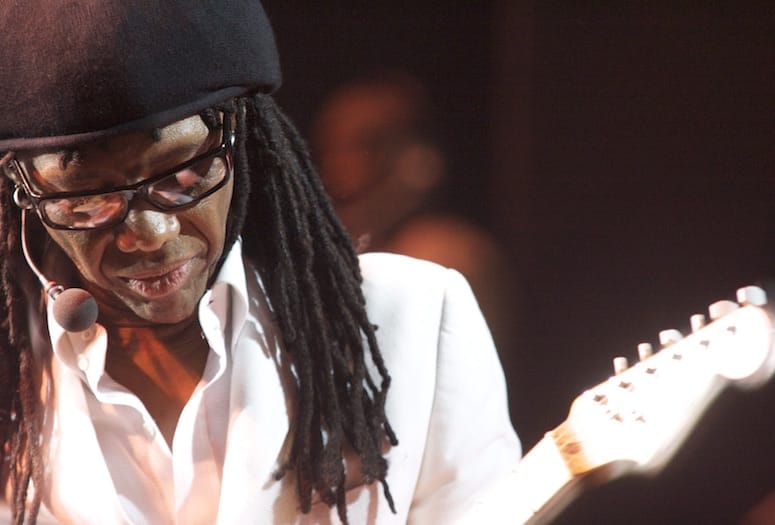 Nile Rodgers will introduce a new album as part of his performance July 15 at Fantasy Springs Resort Casino.
PHOTOS BY DIEGO PAUL SANCHEZ

Rock & Roll Hall of Famer Nile Rodgers has been either cranking out or crafting hits for decades now, counting everyone from global goddesses like Diana Ross and Madonna to pop legends like Duran Duran and David Bowie as colleagues and friends.

But Rodgers’ connections to music greatness extend to Greater Palm Springs and back to his first record deal with a group called New York City on Chelsea Records.

“The owner, Wes Farrell, married Tina Sinatra and we did a record called I’m Doin’ Fine Now, Rodgers recalled. “Tina named our band New York City and was an integral part of that whole thing when we first started. And if Frank Sinatra was the king of Palm Springs, Wes was definitely the prince.”

Rodgers went on to co-found Chic in 1977 with bassist Bernard Edwards, and a string of hits followed including “Le Freak”, “I Want Your Love”, “Everybody Dance”, “Dance, Dance, Dance”, “My Forbidden Lover”, and “Good Times”. In fact, “Le Freak” was composed after the group was denied entry into the infamous Studio 54 despite an invitation from Grace Jones.

Fourty years later, Chic is about to release a new album, It’s About Time, for the first time in 25 years and features the exuberant single, “I’ll Be There” heading into their July 15 date at Fantasy Springs Resort Casino.

Palm Springs Life caught up with the multiple Grammy Award-winning Rodgers briefly ahead of the concert.

PSL:You met Tina Sinatra, Did you ever meet the Chairman of the Board?

Niles Rodgers: Sinatra was kind to me when I first became a big producer. He came to New York to record with Quincy Jones because I had one of the few digital tape recorders in America. Only Frank Zappa and myself. And Zappa wouldn’t let them use his! So he flew all the way to New York to use mine. We’re sitting in the studio and I just couldn’t help it—I said Mr. Sinatra, do you remember me? He said ‘Pud! (that’s my nickname) What are you doing here?’ I said, I’m the number one producer in the world! He looked at Quincy and says, ‘Q, I thought you were the number one producer in the world.’ And I said, that was last year. And that’s how I became friends with Quincy Jones. As for Sinatra, he was some kind of character, he was an amazing guy who taught me a lot. 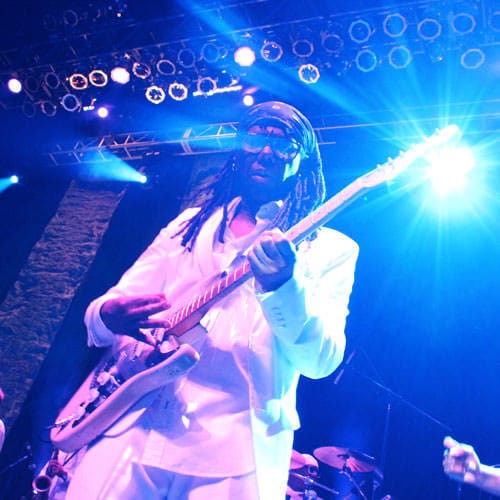 Chic is about to release a new album, It’s About Time, for the first time in 25 years.

PSL:You’re certainly no stranger to rock royalty. So many great names you’ve worked with come to mind, such as David Bowie. You produced Let’s Dance, Bowie’s biggest album. What inspired you in the studio — was it the force of Bowie’s personality or your own musical tastes?

NR: It’a s hybrid of both. It’s a strong work ethic and me not wanting to let my artist down, no matter who it is. In that case it happened to be Bowie, who had no record deal, who had to pay for the record himself. I mean I felt sorry for him. I was like you’re kidding, you don’t have a record deal? But it wound up being the greatest thing because he could control his own destiny at a brand new label and it wound up being amazing.

PSL: And then there’s Prince…whose death you described as being “struck by lightning.” There were those rumors of a new song…

NR: Prince was an amazing friend. I had even written a song about my conversations with Prince (called “Prince Said It”) on the new Chic album. I certainly wouldn’t do it live before we put it out on the record. I’m actually thinking of pulling it from the record and putting it out as an individual product. It’s a happy record, but it’s very sad to me.

PSL: To say it’s been an emotionally difficult year or so for pop music fans is a gross understatement. There’s George Michael. You had been working on a record with him just days before his death on Christmas day last year.

NR: I hope it’s a hit, but I feel bad George Michael never got to hear it. We were literally one day away from having that session. The vocals had all been recorded. The reason I was so adamant about George hearing it first, before the record company, is because I did something very drastic to the music. I thought this is not fair because you have George Michael fans who may like the original version. But what we did was take an old B-side and make it commercial. Once again I was taking a big chance, and just this morning, I get a phone call, the whole record company has been buzzing…

PSL: Speaking of voices that transcend time, is the new Chic album a return to disco?

NR: This is the 40th anniversary of Studio 54. It’s also the 40th anniversary of Chic and a lot of the things we talked about then are the same things that plague our world now. We were more celebratory than hedonistic. We were sort of amazed at the opportunity to live in this fancy world of people who were relatively poor — when Chic came out in 1977 it was during the biggest recession since the Great Depression. People were poor but the disco kids were living it up…take a film like Saturday Night Fever, which was pretty accurate, it’s a kid in a hardware store in Bensonhurst, a very working-class neighborhood, but when he goes to the disco he’s living like a superstar.

PSL: You and Chic were superstars.

NR: Our lives were very much like that then. We were poor guys that on any given night we could be hanging out with Michael Jackson or Liza Minnelli or Mick Jagger because we were on that side of the Studio 54 lifestyle.

PSL: Can disco have an appeal to the more EDM-driven club-goer of today?

NR: In the case of Chic it certainly does. We’re one of the few totally live bands who play EDM festivals all the time. We’ve played Ibiza four or five times now, and we opened the Hard Rock Café there and it was amazing. It makes us extremely proud because we are completely live, we have no click track, no secret backing vocals: the way we perform is the same way we make the records.

PSL: Speaking of records, if you could only take three with you to a desert island…or to the desert…?

NR: John Coltrane’s A Love Supreme. And probably Eddie Kendricks’ Girl You Need a Change of Mind, after he left The Temptations: disco really started with records like that. Oh and probably Chic’s third album Risqué — the one with “Good Times” on it.