For many pacesetters, the journey to Greater Palm Springs is a long and winding road. However, it’s often a path quickly traveled, as though racing fate. When they recognize this is where they will stop, settle, and bask in surroundings that spark intense inspiration, they begin producing their best work.

Paula Bueso-Inchausti and Guille Castaneda, who trained at the Architecture School of Madrid and practiced in Spain, Paris, and London before breaking ground on their stateside career in Silicon Valley, have sprinted that stretch of highway. On the heels of Castaneda’s work for Foster+Partners designing the Apple Park campus in fast-paced Cupertino, the couple has brought their design-build firm, Nomos RED, to rest and refocus in Palm Desert. 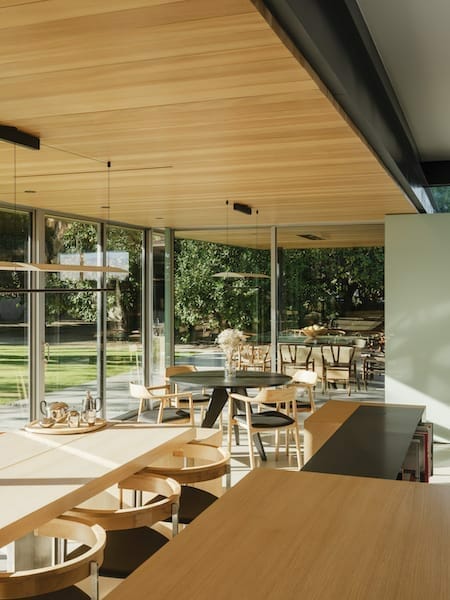 Standing in the glass box living area of their first completed local project and explaining their choice of materials and methods, they project the energy of interns, the passion of scholars, and the steadfast ideologies of those who aspire to become masters of the craft. Morning light filters into their dramatic take on organic modern architecture from three sides and they look remarkably at home, because this was.

What appears to be a new build of four bedrooms, including an attached casita, clings to sparse remnants of the 1971 estate they purchased for them and their four children. The mature landscape in back reminded them of Spain and the quiet established neighborhood came with a pleasant walk to El Paseo. Two years in, however, the dark, closed-in kitchen wore them down.

Between other projects, they bought an invisible kitchen by Bulthaup and Boffi to hide Gaggenau appliances and integrated modern lighting. Stainless countertops, common in the high-end commercial and residential kitchens of Europe, topped expansive islands laid out like drafting tables. But the home stared back at them, wondering when they would bring the rest of it in line with the desert-modern future.

“We invested heavily,” Castaneda explains of their all-in remodel to create the ultimate family home. “At one point, we just said, ‘Let’s make it a branding project.’” A few walls, the original spa, and hints of the former layout are all that remain, shrouded in glass-encased minimalism. Every flawless angle exhibits Europe’s technical approaches and emotive style compounded by a drive to experiment.

“In Europe, it’s all about concrete, steel, and glass structures and using new materials,” he says. “When we arrived in Cupertino, this innovation hub of the world, everything was sold as luxury but the construction method was very rudimentary,” and thus disappointing. 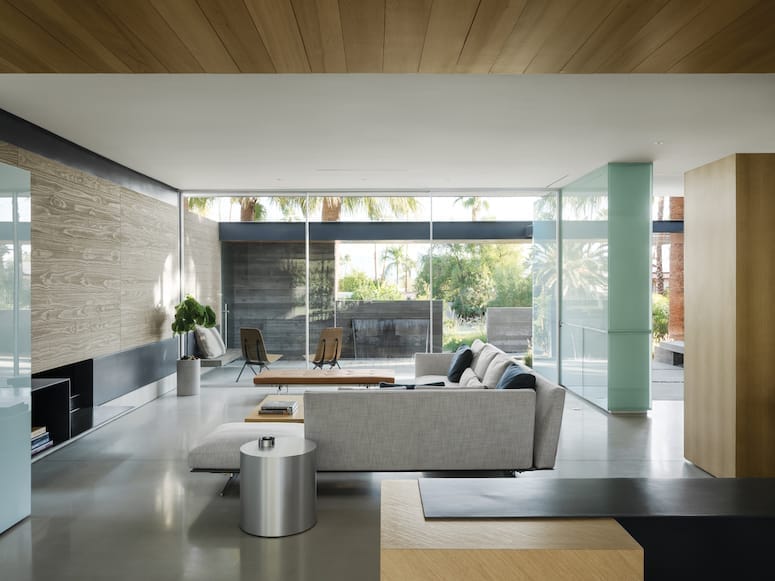 A SoCal escape to attend the BNP Paribas Open tennis tournament in Indian Wells several years ago reset their course. “Meeting the midcentury style was great because most of the architectural schools in Europe are highly influenced by the modern movement of the 1920s,” Bueso-Inchausti says. “Coming here, with Richard Neutra and all of these architects, was like going back to our roots.” Castaneda adds, “That’s when we decided, maybe there’s something we can do here. Maybe there’s some value we can add.”

Beginning at the 5-inch-thick, 1,000- pound pivoting entry door, the home serves both the visual and practical needs of a family, albeit an architecturally minded one. It was built on modern principles with a European foundation, quite literally. 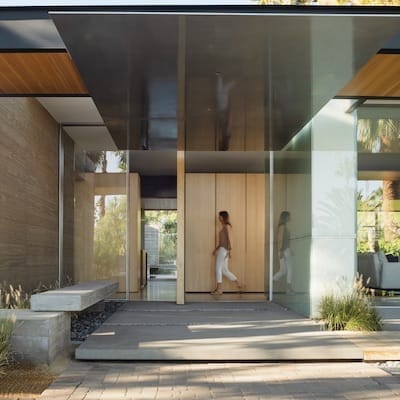 “This house has two 8-foot steel cones going into the ground, surrounded by concrete,” Castaneda says. “It’s enough to support a six-story building. We learned California’s code and cost hurdles the hard way, but this is the way we like to build.”

Materials fundamental to the modern movement form their principal palette. Concrete provides as much structural support as it does cool appeal. Board-formed concrete masses hulk about the exterior, with dark ribbons of steel and warm planes of weather-proofed wood from Sweden. Where the wood meets the minimal-frame windows and doors, it continues through to the inside. Polished concrete floors wear their control joints well in public spaces; white oak cabinetry ties into wood flooring in the personal spaces. You won’t find baseboards or grout, but there are stone accents and glass walls that glide back across rollers in the floor. Back-painted glass panels gleam or glow depending on placement. 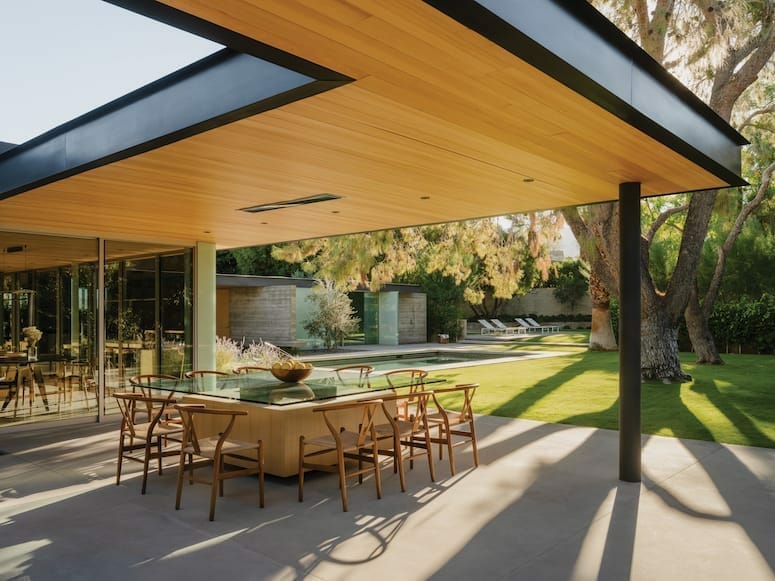 As the materials correspond to their duties, “different heights correspond to the functionality of each space,” says Bueso-Inchausti, again allowing form to follow function. “At the main entrance, you want to feel welcome, so we lower the canopy, which also protects from the weather. The living room expands upward for entertaining then lowers again in the kitchen for the vent and a cozier feeling.” The dialogue between these overlapping horizontal planes unfolds in a linear play of materials high above everyone’s heads.

Connected open spaces comprise building blocks of living, each reaching into the outdoors to pull the gardens closer. Asymmetrical compositions abound but never detract from the balanced quality. 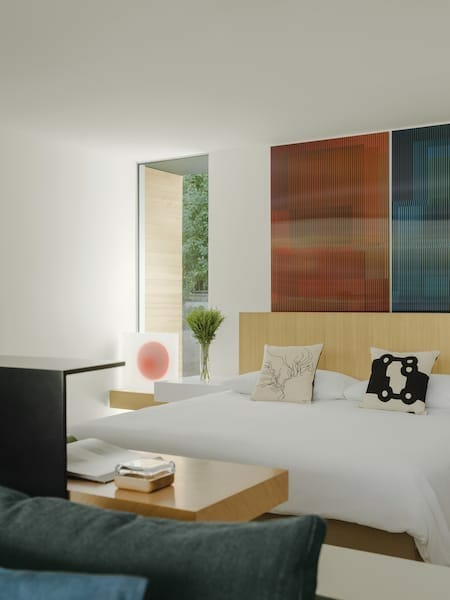 In the main bedroom, a diptych art piece by Paulo Boide joins cushions by Chillida Leku. In the window is an acrylic case by Isabel Alonso. 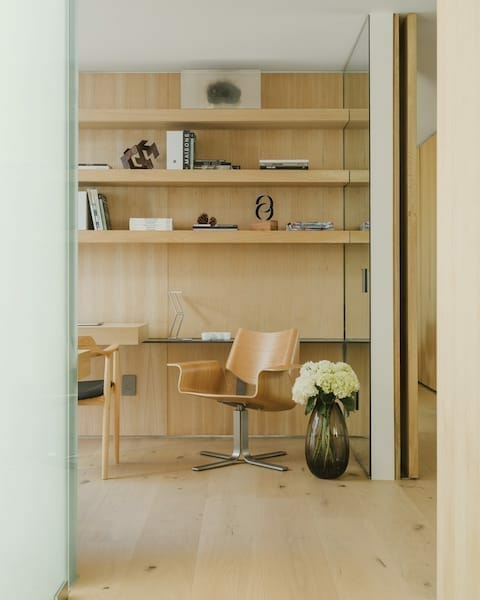 White oak panels line an office wall.
The harmony among the modernist tenets flowing through the home doesn’t happen overnight. The couple’s families were friends in their native Madrid; the pair has known each other for most of their lives. And if one does what comes naturally, it hardly feels like following principles. Morning people rise with the sun. Modernists rise to greatness by making minimalism look effortless. 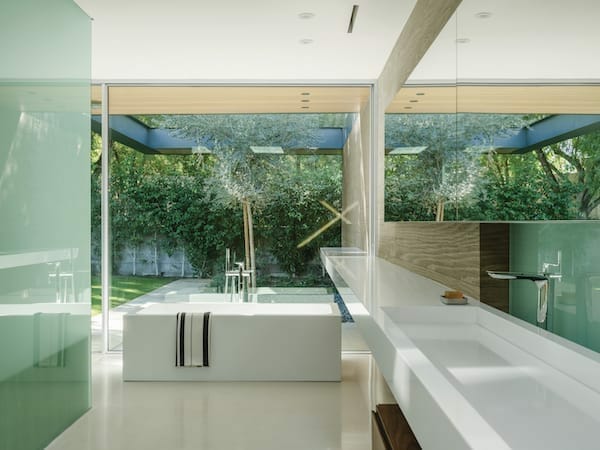 Natural light moves through the home supported by a palette of glass, white oak, and stainless steel. 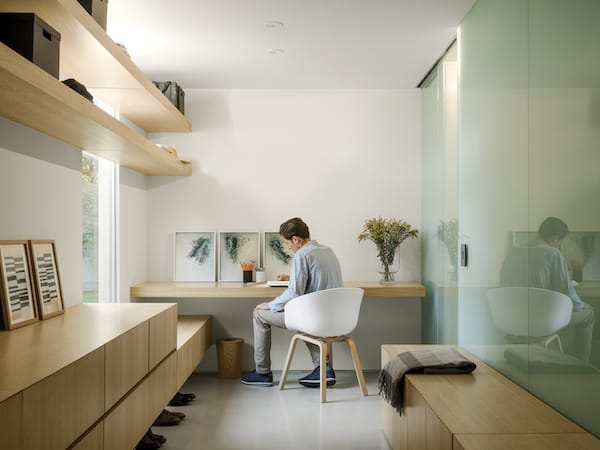 Each Nomos RED residence bears the influence of their historic mentors: Le Corbusier, Frank Lloyd Wright, Alvar Aalto, and Ludwig Mies van der Rohe. It was the latter who said, “We should attempt to bring nature, houses, and human beings together in a higher unity.” With ample trees providing shade and views, and communal spaces proportioned for two extended families from across the pond to gather as one, this home succeeds. 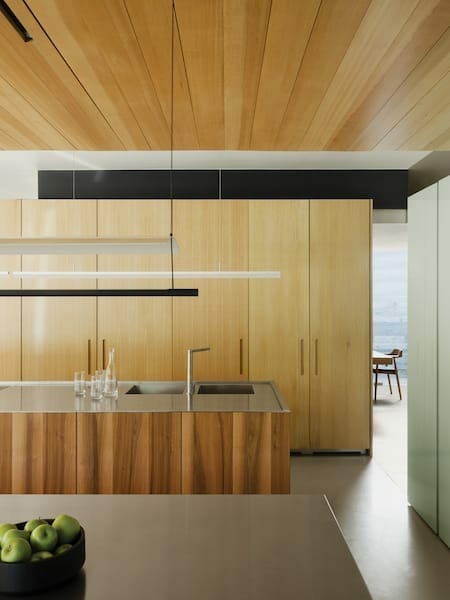 Yet the ideologies the firm upholds — traced to the 1920s, then defining the post-World War II era — need not be analyzed to be appreciated. The experience of seeing through 9-foot glass walls is a superpower bestowed to the inhabitant, even if not consciously acknowledged. The precision behind exacting corners and seamless transitions, and a refusal to conceal unfinished business behind excess ornamentation, is, while expensive and laborious, a timeless bliss for those who live here.

The couple’s ideal abode fielded multiple offers within three weeks of hitting the market in late 2021. In completing and listing it, they anchored their business and their young family to the area — all without bending their set-in-steel standards. Modern instincts led them over advice from real estate agents and industry pros who had cautioned the price was too steep without a country club address, the front of the home was too exposed to the street, and it lacked an extra family room. 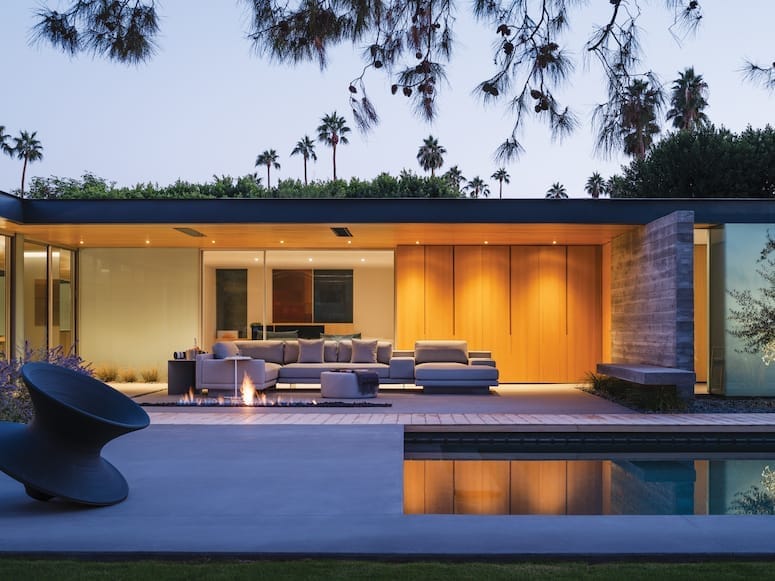 A mix of lighting and a linear fire pit create a nocturnal environment.

Now, the home that speaks an international language gives regional architecture another push forward while providing a foundation for the couple’s design-build growth.

With five projects underway and more in the planning stages, their next stop will bring modernist specimens rife with midcentury materials to the clubs — but only where welcome. They recently fired themselves from a job behind the gates when the HOA insisted on rounded corners, molding-topped columns, a gabled roof, and smaller windows. Floor-to-ceiling glass? Verboten. “Even though they loved our design, they were totally opposed to it,” Castaneda says. “For this club, modern architecture is a trend. They prefer a conventional Mediterranean style to preserve their guidelines. In their world, function follows form,” so the venture concluded before it began.

A supportive word on staunch beliefs came from Bueso-Inchausti’s architect father. She comes from a lineage of architects and developers in Spain, and the pair had interned during summers at his firm. His counsel: Never do anything you’re not going to be proud of. “It takes two to three years to get a project to become a reality,” Castaneda says. “He was affirming that if, by the end of all this work, you’re not going to be proud and want to show it, then it’s not worth doing.”

Bueso-Inchausti takes a wistful look past the custom furnishings they designed for the home and out to a favorite shaded seating area under a new broad overhang. “We try to balance what we feel is best for the city with what we feel is best,” she says. “That makes us proud while making a living.” A very modern living.