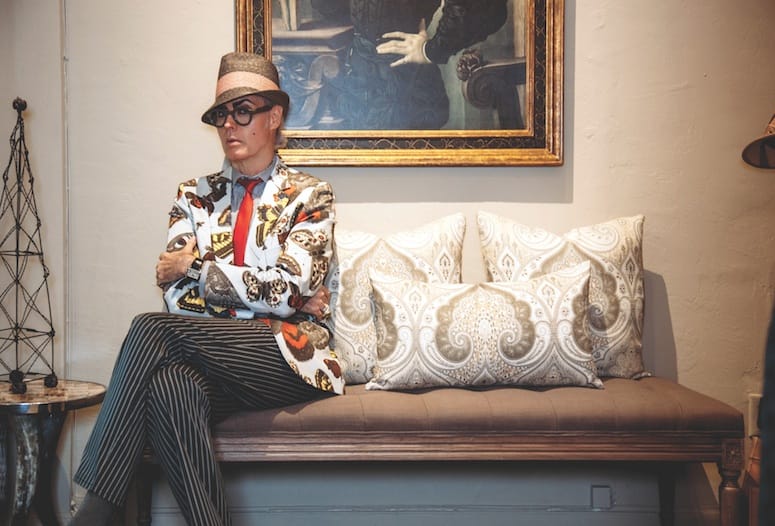 “The first time Bill photographed me I was wearing a zoot suit — it was a John Paul Gaultier high-waisted pant with suspenders — and I was walking down the street with my jacket flung open,” McDonald recalls. “Someone told me, ‘Oh my God, you’re in The New York Times!’ There were only about five images on the page back in those days, and they were in black and white. It was f-a-abulous.” Since then, McDonald has become a dandy of fashion books, documentaries, and television series, and has even played himself in such fashion-forward films as Sex and the City and The Devil Wears Prada.

The California-born creative now returns to his roots, where he’s collaborating on a fashionable eyeglass collection with Selima Optique, writing a memoir (“It will cover four decades of escapades in New York!”), and running Palm Springs boutique No. 6 — a well-curated collection of high-end fashions, furniture, and accessories — with his twin brother, Michael.

Who dubbed you the “Dandy of New York”?
My dear friend Iké Udé was the first one to call me that. Years ago he said, “Well, you’re a dandy,” and the name sort of just stuck. I thought of men who dressed up and the James Cagney movie Yankee Doodle Dandy, which I love. I was inspired by Cagney’s style — checks, stripes, and newsboy caps.

You made your debut in Manhattan society at Studio 54.
I moved to New York in the late ’70s and worked for [Italian fashion label] Fiorucci. I think Studio 54 was the first club I went to where I felt at home. I never got turned away and met so many friends there. It was my coming out party [laughs] — well, not really.

Your style in one word:
My God. I’ve never been asked that. That’s a great question … dandy [smiles].

You appear in Rose Callahan and Nathaniel Adams’ book, I Am Dandy: The Return of the Elegant Gentleman. What are the do’s and don’ts of being a gentleman?
Manners. It’s all about manners. It doesn’t matter how much money you have or what designer clothes you wear. It’s about how you carry yourself and treat other people. I’ve seen a street cleaner in Paris be elegant.

Three fashion rules by which you live:
Be well groomed. Have your shoes polished. Be true to your own style — trends are OK to be inspired by, but don’t be trendy.

To what do your attribute your affinity for fashion?
My mother. She took Michael and [me] to Europe for the summer in the late ’60s, where we saw the Pucci Palace in Florence. European designer clothes weren’t much in America at the time. She’s really the one who introduced us to fashion.

Your style icon:
Diana Vreeland. I met her once. I love that she lives in a dream … she’s this hardworking businesswoman but at the same time everything is “ma-a-a-rvelous” and “gla-a-a-amorous” and so over-exaggerated — I love over-exaggerated, obviously.

What drew you to Palm Springs?
Michael and I used to come here as children and stay at the Racquet Club. And I’ve always come during Modernism Week since Michael’s lived here. Palm Springs is so steeped with history and you really feel that here. And it has this sort of hideaway feeling. I really love that. It’s not as plastic as Los Angeles.

How has the desert influenced your style?
I don’t mind being a bit more casual here.

What are your favorite items at No. 6?
The Fornasetti. The vintage watches. The Kimberly McDonald home collection. The Emilio Pucci china. It’s everything my brother and I love — everything is a favorite. We’ve gone everywhere from flea markets in Paris to Portobello Road in London to Pasadena to see what catches our eye. What we like, we hope other people will like.