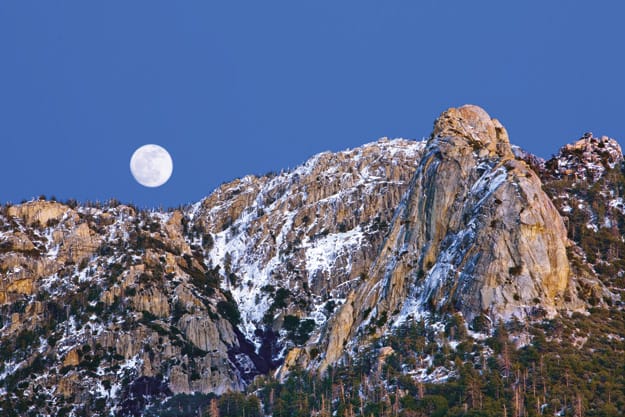 High on the face of Suicide Rock one day in the 1970s, a young Gib Lewis, resplendent in blond Afro, clawed his way up to a tiny ledge. When he stopped as if he’d reached the end of the climb, a chorus started up. Far below at the base of the rock, a gang of fit, bandana-clad young men in cutoffs chanted every conceivable variation of “push it harder.”

You could not dishonor the Stonemaster, so push it Lewis did. He whimpered and sweated as he climbed 15 feet higher, trying to gain purchase on a knob as smooth as a grape.

When he finally returned to earth, he “slouched down and rocked back and forth like an imbecile,” John Long writes in The Stonemasters (Stonemaster Press). Before Lewis had stopped trembling, the next guy was up the run, then the next.

The Stonemasters of Idyllwild were as big (some say bigger) than the big-wall climbers of Yosemite. They changed climbing styles around the world and influenced youth culture in the Badlands of the Dakotas and beyond. White painter pants and funny shoes were suddenly cool everywhere.

And yet, even if you climbed the grueling Devil’s Slide Trail out of Idyllwild a hundred times in the 1970s, you might have never known of them. Few hardcore adventure fans today know the story of the Stonemasters.

Their playground — Suicide and Tahquitz rocks — lies just outside the boundary of the Santa Rosa & San Jacinto Mountains National Monument. Tahquitz (also called Lily Rock) is that shining pillar visible anywhere near Idyllwild. It’s also the legendary home of Tahquitz, the soul-snatching Cahuilla spirit who was said to peer out of the rock.

To get there, start at Humber Park, the main portal into the San Jacinto Wilderness. Take the Devil’s Slide Trail and look for steep side paths through dense forest leading to the Twin Towers, scene of a revolution that was launched in the 1930s, when the Rock Climbing Section of the Sierra Club was especially active.

A member named Jim Smith, scouting Idyllwild in 1935, spotted the 1,000-foot face of Tahquitz and reported back to headquarters. Ever since, the tall face of granite has loomed large in the dreams of climbers.

Ruth Dyer Mendenhall was introduced to Tahquitz in 1938. Climbing with a case of food poisoning and flirting with her husband-to-be, Johnny Mendenhall, she attempted the run called Traitor Horn. “No girl had ever tried it,” she writes in Woman on the Rocks.

Soon Tahquitz was drawing climbers who would become some of the biggest names in climbing — people like Mendenhall, a pioneering Sierra climber; Yvon Chouinard, who owns the outdoor-clothing company Patagonia; Royal Robbins, who also has his own clothing line; and well-known Los Angeles book dealer Glen Dawson, who pioneered the Booksellers’ Route. They established a style and a lifestyle as much as they helped to popularize a sport.

In the late 1930s, the movie Three on a Rope immortalized the Tahquitz scene.
Impoverished local climbers served as extras, but never collected their pay.

The climbing rating system used na-tionwide (5.7, 5.9, etc.) was developed at Tahquitz in the 1950s, though it was tagged as the Yosemite Decimal System when some of the Tahquitz crew moved there. In-the-know people still remind others it’s really the Tahquitz System.

Those early years were legend-making enough; but more legends were to follow when, in the early 1970s, Upland high school student John Long brought his manic energy and beatnik insights to Idyllwild.

A climber and writer who became the sport’s Jack Kerouac, Long gave voice to the Stonemasters’ philosophy — one familiar to anyone who ever admired hippies, punks, or youth itself. Long and his friends were going to push rock climbing as far as it would go, mixing in an ethic of stone brotherhood.

Once they dreamed up the idea of the Stonemaster god and their signature lightning bolt logo, “Nothing held us back,” Long writes. “It was like being birthed out the barrel of a cannon.”

The Stonemasters regarded the often-climbed Tahquitz Rock with the respect you’d reserve for an elder. (While Palm Springs residents call the canyon Tah-KWITZ, the climbers say Tah-KEETZ).

Just across Strawberry Valley, Suicide Rock was untried. So, as Long says, Suicide became their laboratory.

The Stonemasters sometimes crossed paths with the senior climbers, who laughed at them as if they were uncoordinated puppies. All the newcomers could do to gain respect was to better their elders. They innovated free climbing, using ropes and hardware only to protect against falls and not for gaining elevation.

They also pushed the numbers. At first, the climbing rating system went from 5.0 to 5.9, but the new kids pushed it higher. Ultimately, you had to climb one of the first 5.11 routes in the country (Valhalla at Suicide) to call yourself a Stonemaster.

Stonemaster style was to make dozens of climbs in a day, working your hands until you couldn’t make a fist, often climbing conga-line style with 10 climbers in succession. As Lewis discovered on the run called Smooth Sole Wall, each egged the other on. Together they did things no one could do alone.

In the course of setting records, climbers fell. When Riverside Mountain Rescue Unit formed in 1961, its volunteer members became intimately familiar with all the ways to fall on Suicide and Tahquitz. In 2010, one of the rescue team members himself had to be rescued after he fell and broke his leg on a training exercise at Tahquitz Rock.

These days if you head up Devil’s Slide Trail, be aware you’re entering the fabled realm of the Stonemasters and, of course, Tahquitz himself, who shares with the Stonemaster god qualities of power and menace.

The original “granite mariners,” as Long calls them, are older now, with bad backs and knees from jumping without crash pads. Some, like Tobin Sorenson in 1980 and John Bachar in 2009, died while climbing.

In 2009, Idyllwild Historical Society hosted a reunion of the local climbers. One said it was “like a night on Olympus with all the gods of early climbing.” The event was organized by Jane Taylor Levy, who came to Tahquitz as a 17-year-old UC Berkeley freshman and today plays viola with the Pasadena Symphony.

Levy’s friends who gathered in Idyllwild could still remember details of the granite from 50 years ago, each edge and flake and pitch. They could still recite the names of the routes like a mantra: Valhalla, Mechanic’s, The Vampire, Open Book, Drain Pipe, Ultimatum.

Just because the early climbers came to earth doesn’t mean the legend-making has ended. A Stonemaster is simply a kid in search of undiscovered worlds. As long as the kids keep coming, the great granite pillars of the San Jacintos will be there to supply the laboratory.

For more on early climbing in Idyllwild, see John Long’s books and essays, as well as an exhibit on rock climbing at Idyllwild Area Historical Society. A DVD of the 2009 climber’s reunion is available for purchase from the museum. www.idyllwildhistory.org.

Tom Brewster hikes, climbs, freezes, sweats, and sometimes even loses his way in his quest to document the Santa Rosa and San Jacinto mountains to commemorate their 10-year anniversary as a national monument.

Since last September, his photography — paired with enriching stories by writer Ann Japenga — have appeared in jaw-dropping fashion on the pages of Palm Springs Life, which has committed appreciable time and space to celebrate the desert’s national treasure.

Brewster has long been the premier landscape photographer of the Coachella Valley. His photos of the area’s canyons and peaks are instantly recognizable in ad campaigns for Palm Springs Aerial Tramway and on billboards and magazine pages.

This month, the collaboration between Brewster, Palm Springs Life, and entities such as the Bureau of Land Management come to a dramatic climax in a photography exhibition, Into the Wild, at Michael H. Lord Gallery in Palm Springs. The artist reception, open to the public, is set for April 1 from 6 to 8 p.m.

“The Santa Rosa & San Jacinto Mountains Monument is such a huge place, and I realized I really didn’t know what’s out there,” Brewster said in a September 2010 Palm Springs Life interview. “I want to document these mountains in a way that will help preserve them.”