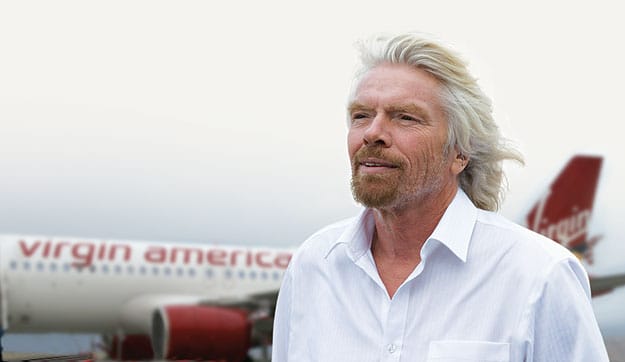 Sir Richard Branson, multiple-record-setting adventurer and Virgin Group founder, told a crowd gathered at a San Francisco International Airports gate that he had never been to Palm Springs because he “could never afford to go there; the air fares are so high.”

Actually, Branson had been to Palm Desert in 2009 for Ernst & Young’s Strategic Growth Forum at JW Marriott Desert Springs Resort & Spa. But he can be forgiven for the lapse in his geographical memory. After all, he had just flown in from South Africa and was stopping at Palm Springs (“I don’t think I have missed an inaugural flight,” he said from his first-row seat on the plane) before heading to Los Angeles for a commercial shoot with Nike that evening and then making his way to his private Necker Island in the British Virgin Islands for his daughter’s wedding and Christmas. He travels the globe frequently for business, pleasure, and to participate in efforts aimed at solving the world’s problems.

“It’s just to try to get every single business to become a force for good,” he says of his mission in writing the book. “Businesses shouldn’t just be making machines. Business people have entrepreneurial skills to change things in the world, and they have more experience than politicians to do that — and they should do that. … I get enormous satisfaction from trying to do that myself. I would like to bring a whole army, to get everybody on board if possible.”

In his latest book, Branson states that Virgin Unite (underwritten 100 percent by Branson and Virgin Group) was created in part to “find the gaps, the issues that no one else would touch, so that we could work with partners to come up with entrepreneurial solutions.” In particular, he believes the nonprofit has been successful with an initiative called The Elders, through which world leaders go into areas such as Sudan and Zimbabwe to help resolve conflicts. He further thinks Virgin Unite has gained traction in getting carbon out of the air. “We have developed clean aviation fuel,” he says. “Soon people will be able to fly on ‘clean’ planes.”

While Branson wears the power suit of a leader (figuratively speaking, as he typically dresses in jeans and an open-collar shirt) and many people consider him a role model, he has his own list of venerable people, beginning with a former U.N. secretary-general and a computer industry pioneer.

“Kofi Annan has devoted his life to making the world a better place,” he says of the Ghanaian diplomat. “And I have enormous admiration for Steve Jobs, who sadly is no longer with us, and the brand he built with Apple.”

But his respect for others — carried forth in corporate policy — extends beyond world figures. The head of Virgin Unite in Canada started as Virgin Mobile’s receptionist, and the managing director of Virgin’s recording division was initially hired as a cleaning lady.

“Most people have potential far above what they do, and it’s just a matter of giving them a chance,” he says.

That belief in an individual’s potential has driven Branson to pursue what most people would consider impossible, if not improbable, undertakings. He has broken speed and distance world records in crossing the Atlantic and Pacific oceans by hot air balloon and by boat, though bad weather thwarted his attempt to circumnavigate Earth in a hot air balloon. His devil-may-care endeavors would lead one to believe he is fearless; but he is, after all, human.

“I have been pulled out of the ocean six times by a helicopter, and on each occasion I certainly got scared,” he admits. “But I try to push myself to the limit and see what I am capable of. Some of the greatest adventures, I hope, are still to come. Next Christmas, we’ll be taking people to space.”

Branson is talking about his “other” airline: Virgin Galactic (formed in conjunction with Burt Rutan’s Scaled Composites) — aiming to offer the first commercial suborbital flights to space. Following spaceship construction and testing in the Mojave Desert, Branson and New Mexico Gov. Susana Martinez in October 2011 dedicated the Spaceport America terminal and hangar just west of White Sands Missile Range (55 miles north of Las Cruces). Of all his adventures, Branson considers this his most monumental. “Soon I’m going into space with my children [Sam, 26, and Holly, 30]. It’s pretty exciting.”

As if going higher than he’s ever been isn’t enough, Branson has designs on going deeper than he’s ever been. In April 2011, he unveiled Virgin Oceanic “to assist science in understanding our ecosystem and raise awareness of the challenges facing our oceans.” The expedition’s one-person sub will dive to the deepest part of Earth’s five oceans. Branson himself plans to pilot the second dive — more than five miles deep into the Atlantic Ocean’s Puerto Rico Trench. The first dive, originally expected to occur this year, has been pushed back.

Branson combined his passions for adventure and entrepreneurship in his 2004-2005 reality series, The Rebel Billionaire. In the Fox network program, he challenged contestants to perform stunts such as walking across a plank from the gondola of one hot air balloon to another or climbing a rope ladder on the outer envelope of a hot air balloon to have tea with him on top. Although the series succumbed to low ratings, Branson says, “I think we’ll do [a reality-based show] around the space program. We may have a new concept, so we are working on it at the moment. We had lots of fun making [The Rebel Billionaire].”

Branson began his entrepreneurial empire humbly enough: with a mail-order business selling cut-price records in 1970, when he was 20 years old. In 1971, he opened Virgin Record Shop in London. The next year, he opened a recording studio. The year after that, he launched the Virgin Records label, releasing Mike Oldfield’s Tubular Bells (The Exorcist soundtrack). The label subsequently signed acts such as the Sex Pistols, The Human League, and Boy George and Culture Club. Branson still holds a place in his heart for music.

“I love a lot of old records,” he says. He also loves the music of his good friend Peter Gabriel, as well as reggae. And when he was in South Africa, he was enthralled by a young girl’s singing. “I wish I still had the record company,” he says. “I would have signed her up in a shot.” (Branson sold Virgin Records in 1992 to fund his U.K. airline, Virgin Atlantic.)

Holly’s Dec. 20 wedding took place on the same spot on Necker Island where Branson married her mother, Joan, in 1989. During a tropical storm in April 2011, the Branson residence burned to the ground after a lightning strike. Rebuilding the structure, Branson reported, would begin the day after the wedding. Meanwhile, Balinese villas on the island were available for guests.

Reporting on the fire, London’s Daily Mail newspaper quoted Branson as saying, “There’s a lot of damage, but we’ll create something even more special out of the ruins.”

His fortitude and unflinching good humor have deep roots.

“I was brought up to look at the best of people,” he says. “I love people, and I think as a leader you should have a sense of humor. Why not? I have an incredible life, and I have a lot to be happy about. Not taking yourself too seriously is important. … There are serious moments and times when there are fun moments.”

David Cush always sits in seat 4A of the main cabin. You’d think the president and CEO of Virgin America would enjoy the extra perks of first class, but he follows company policy that employees travel coach.

Virgin founder Richard Branson says that’s what he had in mind: “to create the kind of airline I would like to fly on.”

The difference is immediately noticeable. Virgin America is the only carrier featuring interior mood lighting that casts a lounge-type glow.

Other standouts include deep leather seats; Wi-Fi; and, at every seat, a 9-inch touch screen for the trademarked in-flight entertainment system that includes a music library, selection of movies, satellite television, games, food and drink ordering, digital shopping, seat-to-seat messaging, and interactive Google map to track the journey.

On top of spending $45 million to $50 million for each Airbus plane, Virgin America spends $3 million on custom upgrades — and still manages to offer low fares.

“We run one type of airplane. We run point to point, no hubs,” Cush says. “We spend money where the guest sees it, and we save money everywhere else.”

Launched in 2007, Virgin America celebrated its 16th market and fourth in California (Palm Springs) on Dec. 15, 2011. It hasn’t made a profit yet, but, Cush explains, “It’s very difficult to make money while you are growing. By May, we will have 52 aircraft. That will be double the fleet of two years ago. … We are highly confident that [2012] will be a profitable year even though we are still growing.” According to Branson, “[Virgin America’s] load factors have always been better than others’.”

Another thing that sets the airline apart is that it names every plane (painted on the nose).

“We don’t fly them until they have a name,” Cush says. “It a superstition that comes from sailors.” In conjunction with new service to Palm Springs, Virgin America announced a contest on Facebook to name the carrier’s next plane, with the prize being a trip for two from San Francisco to Palm Springs and a two-night stay at Riviera Palm Springs. The winning name was Scarlett O’Air, in homage to Palm Springs’ Old Hollywood connection.

The company also has auctioned off naming rights for charitable purposes. At a Virgin Unite event in November, two bidders wanted to pay $75,000 for the right to name a plane, so a second plane was added to the auction.

Even before landing at Palm Springs International Airport, Virgin America had signed on as a Fashion Week El Paseo sponsor.

“We are going to be quite visible in Palm Springs,” Cush says. And he’s not just talking about people seeing Virgin’s red and white logo in the skies above the valley.