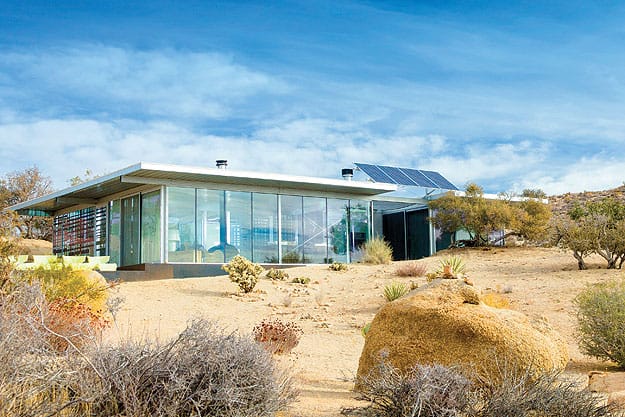 Architect Linda Taalman Koch built her glass house in a special part of the High Desert — a place that locals know as “Gamma Gulch.” Close to Pioneertown, the landscape is lonely and breathtaking in equal measure, and those who choose to live within its winding network of bumpy dirt roads tend to be, Taalman Koch says, “resilient types.”

“There’s a history of this being a place for people who are loners and pioneers,” Taalman Koch says, pouring a cup of barley tea in her kitchen, which boasts sweeping views of this magnificently eerie landscape. There’s no TV in the transparent dwelling, no Wi-Fi, and no cell phone signal. “Sometimes I feel like I’m the guy in 2001: A Space Odyssey. I’ll be eating lunch by myself and all I can hear is the sound of my silverware, the sound of my chair moving, and the sound of my house expanding and contracting. I like it.”

The house is an “iT House,” a pre-fabricated kit home based on a luxurious, off-the-grid design Taalman Koch created under the banner of her firm, Taalman Koch Architecture. Made of aluminum, steel, and glass, it sits lightly on the earth with minimal foundations, an energy-efficient yet ultra-stylish house rising up from a wild and rugged landscape. It has no conventional heating or air-conditioning system, but remains cozy in winter and cool in summer with its passive heating and cooling, strategic orientation, and cross ventilation — as well as an efficient, suspended steel fireplace called a “fire orb” that looks like a spaceship.

Dwell magazine called the iT House among the most architecturally important in Southern California, sparking visits from countless curious admirers. One of those visitors was a German media executive, Andre Nitze. So enamored was he with the design, he built his own iT House a couple of boulder gardens and few dozen Joshua trees away from Taalman Koch’s home.

“I’m here every single weekend,” says Nitze, whose house, completed in 2011, is the fourth of 10 built so far. “Being at my home here feels like taking a shower. It washes away all the L.A. city stuff, the stress, and the distraction. Then what’s left is just you. It’s awesome.”

The Greatest of Changes

In 2008, when Nitze was still based in Berlin, he took a road trip from Chicago to San Francisco, stopping in L.A., where he got his first taste of the Southern California lifestyle. He liked it. “I decided I needed to create some reason for me to come back — like a house,” Nitze says. A Bauhaus aficionado with minimalist sensibilities, he started researching kit houses and prefab homes, and found the Taalman Koch iT House website. The clean lines and sparse yet functional drama of the house was exactly what he wanted.

Nitze flew to California to meet with Taalman Koch and see her iT House firsthand. He decided that he, too, wished to create his dream home in the desert. The next hurdle was finding the perfect plot of land. A week later, one of Taalman Koch’s neighbors mentioned that they wanted to sell 10 acres — “In Gamma Gulch, no one advertises,” she says. “It’s word of mouth” — and Taalman Koch immediately emailed Nitze with the news. One phone call later, Nitze had purchased the land and was ordering his iT House kit. Then all he had to do was build it.

“Building it is less difficult than you might imagine,” says Taalman Koch, and Nitze nods. No heavy equipment is required. No cranes and no trailer trucks. The main components of the 3,000-part kit are the flexible aluminum frame for structure and wall framing, an acoustical steel deck roof, an aluminum framed glazing system consisting of large sliding doors, a panelized enclosure system, and built-in cabinetry. The kits are designed for a crew of two to build using simple hand tools. No welding is necessary, as all connections are bolted. Taalman Koch does recommend use of a contractor but Nitze, a resourceful and capable type, assembled the whole thing himself without professional help. “It was fun,” he says.

While the two houses are both 1,200 square feet with an almost identical floor plan, the properties are nonetheless distinct. The décor in Taalman Koch’s is soft with natural accents, whereas Nitze’s is pure Bauhaus minimalism — a masculine, more expansive take on the iT House concept, featuring wood paneling and a recording studio (he was a touring musician in Europe). Taalman Koch’s bathroom features a sliding glass door so she can feel like she’s taking a bath outside (“It’s a kind of exhibitionist bathroom,” she jokes), whereas at Nitze’s pad, the bathroom is closed off, “like a secret spa cube in the middle of the house.”

Now the friends bump into each other on morning walks and call to see when the other is in the desert.

Owning an iT House is like being part of a cool little club, it seems, and Taalman Koch envisages iT villages of four or five iT Houses where people can share resources, like a swimming pool and solar panels.

“I think there are people who want to live in a totally different way than the menu of options that is currently out there,” Taalman Koch says. “You can have Tuscan style, you can have ranch style, but the market has shown in the last three years that the public is more sustainability-minded and more open to design now — not just when it comes to sneakers and cars, but also in the home environment. For those people, the iT House can accommodate a lot of dreams.”