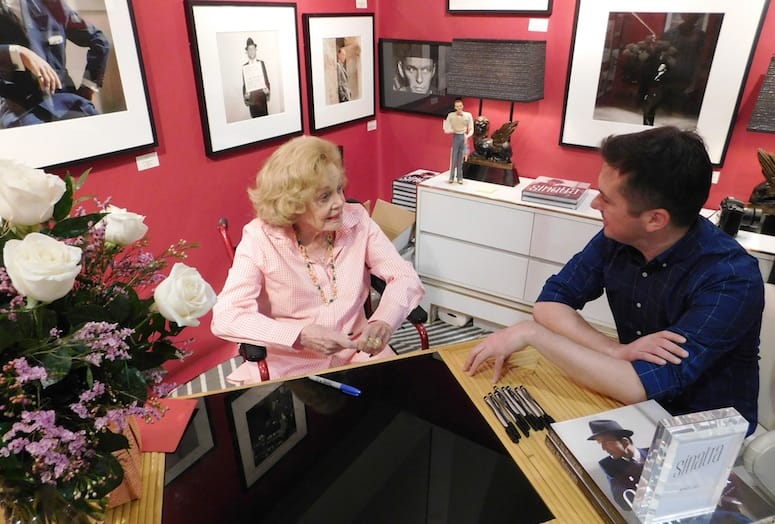 The blue-eyed kid from Hoboken, NJ, may no longer be with us, but he can still pack them in.

An adoring crowd gathered around Barbara Sinatra when she arrived at the Palm Springs Modernism Show & Sale, accompanied by her son Robert Marx, to sign copies of Sinatra: The Photographs, by Andrew Howick.

Barbara Sinatra, who wrote the forward in the book, was joined by Howick for the book signing at the Dragonette Ltd. booth, where a backdrop of captivating Frank Sinatra photos spanning his legendary life line the walls. Fans line up to meet Barbara Sinatra and author Andrew Howick at a book signing for Howick's book, Sinatra: The Photographs. Barbara Sinatra wrote the forward in the book.

“When I went to high school, I was in bobby sox and hanging around the Weber’s Drive-In listening to all his records like everyone else,” she reminisced.

Fan Cindy Shank was first in line. She said she bought four new Sinatra books that came out for his 100th birthday anniversary, and Howick’s is the best. She arrived an hour early to get a signed book to add to her collection of 250 autographed books.

Howick spent five years on the project. He reached out to Barbara Sinatra midway through, and aside from writing the forward, she was instrumental in getting him introductions to many of Frank’s friends and collaborators, including Quincy Jones. “He talked about his time in Vegas with Sinatra and he said it was like being on another planet,” says Howick. “So he was what you thought he was…even for Quincy Jones, it was a special relationship.”

The result of Howick’s work is a luscious collection of Sinatra photographs by Ted Allan, Bob Willoughby, Ed Thrasher, Sid Avery, and Bernie Abramson, who according to Howick, are possibly the only photographers Sinatra ever trusted. The photographers gained access that enabled them to capture compelling images that reveal the essence of Sinatra’s Rat Pack cool and inimitable style. Attendees at the Palm Springs Modernism Show & Sale look at Frank Sinatra photos lining the walls at the Dragonette Ltd booth. The photos are from a collection in the new Sinatra book, Sinatra: The Photographs by Andrew Howick. (From left) Charles Tucker, Barbara Sinatra, Patrick Dragonette, and author Andrew Howick are surrounded by photographs of legendary entertainer Frank Sinatra at the book signing of Sinatra: The Photographs. Dragonette and Tucker are co-owners of Dragonette Ltd., where the book signing took place.