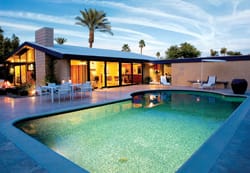 Michael Neu turns on a lamp in his living room with an unmistakable gesture of pride. “When we found this, it was a vase. We had it made into a lamp and it inspired our whole home.” He takes a step back to admire it and beams like the light coming from its big drum shade. The vase is a 1940 piece of German pottery, purchased from the Galleria in downtown Palm Springs. The green of the vase and the Harlequin figures hand-painted in black inspired the direction for restoring the house when they purchased it in a state of disrepair in 2004. It’s an item Neu swears will someday be his “Antique Road Show horror story. I believe when you design, it’s great to find some piece that inspires the color palette and mood and direction. Of course, not really thinking, I quickly turned it into a lamp. I love the vase — and the lamp — but I am sure that someday I am going to hear that as a lamp it’s worth $59.95, yet, had I never touched it, it would be priceless. But I love it. The color palette is so true ’50s. It was the first item we bought for the house even before we closed on it.”

Finding inspiration was the least of the couple’s concern, however, when they first spotted the home — an original model for the other Palmer and Krisel designs dotted along the wide streets and quiet cul-de-sacs of their Rancho Mirage neighborhood. The home had a great location, a solid structure, and one of the most intricately tiled pools in the entire Coachella Valley. One snag: the home was not for sale.

It had, in fact, recently been purchased by Victor Butte of Victory Tile in Cathedral City and his wife, Wendy. Butte, who lives down the street, had bought the TLC-starved home from its original owners with the intention of holding on to it for visiting family and friends. In the meantime, he enjoyed the challenge of laying travertine tile throughout the home and across the massive patio (that now offers a bar area, pergola, and sun chairs). He then spared no expense on the pool, where, with the measured patience and focus of an artist, he and a team of local artisans painstakingly placed thousands of green tiles in bends and curves that dance along the bottom and up the sides.

“I have made my living on design and aesthetics, so we wanted something that had character,” says Neu, the CEO of BCN Communications, a firm in Chicago. His wife, Karen Meyer, is an on-air reporter for ABC News in Chicago. Profoundly deaf since birth, Meyer is the only disabled reporter in America who focuses solely on covering disability issues. Having won many awards for journalism, leadership, and service, Meyer also had an eight-year presidential appointment from the Clinton administration.
e had looked all over — Las Palmas, the Movie Colony…. Everyone said, ‘You’re not going to find a midcentury house in Rancho Mirage.’” One of the city’s best-kept secrets, but only blocks from Mission Hills (one of the city’s numerous gated communities), sits an enclave of midcentury architecture — with homes in both immaculate renovation and original-sale condition.

“We walked into this house and instantly saw the potential; the bones were great,” Neu says. “But it was a hobby house for Victor, and he wasn’t planning to sell.” But when the two couples met, they hit it off. Later that day, Butte called and “told us to get going,” Neu says. They hadn’t even closed before Butte was encouraging them to start their restoration. “He knew it was going to be a labor of love for us,” Neu says. And it was.
A year later — after hiring trusted locals to restore the home and shopping locally for period furnishings and accessories — the couple had finished. They now enjoy their home immensely, fleeing the snow and wind of Chicago often throughout the year.

Structurally, the only modification they made was to knock out a kitchen wall to open up the space for gourmet cooking and entertaining. They also added a four-inch layer of foam to the room that has brought the temperature down from a brutal 90 degrees the first summer to a comfortable, air-conditioned 76 degrees. The rest remains as it was when it was built and shown as a model in the late 1950s.

Neu can tell a tale about every carefully collected object, every detail in the home. Meyer says, though, “We live outside.” When they visit, Neu says, “It’s all about getting outside to the pool with a martini as fast as we can. We had a place in South Beach, Miami, for over 20 years. We thought we could never give up the ocean. Now, whenever someone visits they say, ‘OK, I get it.’”

hen these guests arrive, the couple has a system for knowing when to go pick them up. Along with their mountain views, they watch the distant flight path of craft heading into Palm Springs International Airport. “When we see the plane come down, we get in the car,” Neu says. “We can get there by the time they reach for their luggage at baggage claim.”

Though Neu and Meyer live in the desert part time, they have immersed themselves in the culture. Interested in meeting people who live here, they take part in the President’s Circle of Palm Springs Art Museum, Palm Springs Preservation Foundation, antique car auctions, film festivals, modernism events, and McCallum Theatre performances.
Meyer also gets out and about — running, hiking, and biking. Even if they weren’t involved in the community, they would still feel at home. Neu and Meyer run into people from Chicago around town all the time. “People come up to Karen at the grocery store and say, ‘I see you on TV in Chicago!’”

Over the past years, they’ve met so many people that they have learned to schedule time for themselves. Some keep in touch and send mass e-mails when they are going to be in the area so they can get together with others vacationing at the same time. Even relaxing at home by the pool can turn into a social event. When a neighbor comes out to pull a few grapefruits off her trees, she likes to call over the wall, “I’m making greyhounds — come on over!” Equally thoughtful was another neighbor who offered to take down his palm tree if it was blocking their view.

The warmth and friendliness of the people, the security, and the views are top reasons the couple is happy to have settled in Rancho Mirage. “I find it to be very peaceful,” Meyer says. “Plus, it’s the center of the Coachella Valley,” Neu adds.