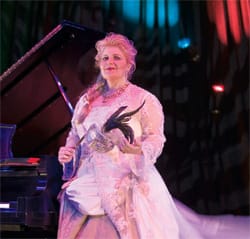 The desert has a new diva in the energetic, fun-loving Metropolitan Opera soprano Janet Hopkins — and she’s determined to make opera and classical music more accessible to the local public.

Clad in breastplates, helmets, and braids and bearing spears, the Norse death angels hover, ready to transport fallen heroes to Valhalla. At the first chords of “Ride of the Valkyries,” Janet Hopkins’ entire being resonates with the music. “Your whole body starts pulsing with that, and you think, ‘Open the curtain! Hurry!’”

A 15-year veteran of the Metropolitan Opera with more than 100 performances to her credit, Hopkins still thrills to the moment. “I’m elevated to somewhere else,” she says. “I’m not just on that stage. I’m in Valhalla!”

Now, however, Hopkins is in the desert. She fell in love with the area when she first visited after Sept. 11, 2001, to perform with the Coachella Valley Symphony in American Voices Heard. After deciding to commute 2,700 miles to New York for her Metropolitan Opera performances, she moved here with her mother and has since expanded her already extensive schedule to include local events.

Even offstage, Hopkins looks every bit the diva — tumbling tresses, sparkling eyes, killer dimples, and mischief in her smile. Talking with her, however, it is immediately clear that she doesn’t act like a diva. Energetic, gracious, and down-to-earth, she frequently punctuates her speech with gales of laughter.

Hopkins’ co-stars are a who’s-who of opera elite: Plácido Domingo, Luciano Pavarotti, Deborah Voigt, Marilyn Horne, and Renée Fleming. She sings in Russian, Czech, French, Italian, German, English, Latin, and Spanish — and speaks most of these languages, too.

She leads a glamorous life filled with global travel, fabulous costumes, and star treatment. The dressing rooms at the Met, for instance, “are as big as some studio apartments I’ve seen in New York,” she says. “And when you’re in there, people wait on you hand and foot.”

Part of the magic she feels on the Met stage comes from the extraordinarily detailed costumes. “I was in Khovanshchina, and our costumes were simple peasant clothes, but the buttons on it were actual elk antler buttons, which were typical of the time period. When you’re wearing things like this, you can’t help but be transported.”

The costume shop at the Met is enormous, and the clothing is custom-made for new productions, she says. “This is your costume, and your name is in it. You can go back 10 years later and your name is still in that costume. It’s very cool.”

The singers garner rock-star treatment in Japan, where audiences enjoy the theatricality and skillful singing of opera and Met productions sell out well in advance. Hopkins has toured Japan three times with the Met, including this May and June, ap-pearing in Die Walküre in Nagoya, Kobe, and Tokyo. It’s an immense production, with the opera flying in two complete casts, two orchestras, sets, costumers, administrators, and even a company doctor.

Hopkins recalls an earlier tour to Japan when her mother accompanied her. “One group of people gave my mother money as a sign of respect to her because she was my mother and they were impressed by my singing,” she says.

This summer, Plácido Domingo joined her in Japan. Working with him is a joy, Hopkins says.

“Plácido Domingo is always in the Die Walküre, so I get to work with him a lot. He’s great. He’s sweet. He really makes you feel like you’re someone special. He’s a very gracious singer.

“I’ve also worked with him as a conductor at the Met,” she adds, “and he’s very, very good, because he knows what a singer needs.”

She shares a special bond with fellow Met soprano Renée Fleming, with whom she attended college at SUNY Potsdam, where both studied music education as undergraduates. In fact, Fleming, fresh off her Met debut, was in the cast when Hopkins made her own debut in The Ghosts of Versailles on Dec. 19, 1991.

“It’s funny,” Hopkins says. “She’s a fabulous singer; but when I’m with her, I’m not thinking of her that way. I re-member her when she would go down to the Rusty Nail and sing with the jazz band.”

Perhaps Hopkins’ lack of pretense comes from her hard-earned journey from tiny Whitney Point, N.Y, to the world’s stages. An all-around musician proficient in at least 10 instruments — including piano, trombone, and timpani — Hopkins wanted to pursue medicine, but chose music education instead.

“I was a very late bloomer vocally,” she says. “I only started studying voice to get into college. I didn’t like opera. I wanted to do Broadway. I had teachers who would tell me, ‘Well, you have a nice voice. Maybe someday you could be in a chorus.’ I didn’t have a lot of people who believed in me as a soloist. Except I kind of knew I could do it. And the more they told me I couldn’t, the more I was determined to show them.”

After receiving a bachelor’s degree, Hopkins pursued a master’s degree in vocal performance despite the lack of encouragement. That’s when she began to explore opera. She began as a mezzo-soprano. Her voice had not yet become what is it today: a dramatic soprano, which is powerful, with a heavier tone, and well- suited to opera. It takes time for this type of voice to develop fully, she explains.

“When you have these bigger voices, they are more unruly. They’re harder to train, and it’s harder to hear what will happen, because they do develop later. That’s the nature of the beast. When you’re 20, you don’t exactly know where that voice is going.”

Her strongest supporter was her father, who died during her final year in college. “It was devastating. My father was the one who was always telling me that I could do anything I wanted. Nothing could stop me. My mother would try to encourage me to go to other veins with my life, and he would say, ‘Don’t burst her bubble. Let her do what she wants to do.’ I felt like I had lost my only support system, the only person who believed in me.”

After earning her master’s, Hopkins visited Chautauqua Institution’s annual music festival. A day trip to the nearby village of Lily Dale, renowned for its population of psychics and spiritualists, changed her life.

“I had several people stop me in that little village of Lily Dale and tell me that my father needed for me to know that he loved me and he was still with me. Once I heard that, it sort of turned around my total devastation at his loss to, ‘I’m not going to give up on me, because he still hasn’t given up on me.”

Hopkins met a singer in Chautauqua who offered her a sublet on a small apartment in New York City’s Washington Heights. She packed her things in a friend’s station wagon, moved to the Big Apple,
and tried out for the Metropolitan Opera chorus. The man at the audition said he wanted to use her for the chorus and would call in a few months, but the call never came. “He died,” Hopkins says.

She studied voice while working in a drugstore, until her teacher gave her an ultimatum — she needed to concentrate on her studies. Hopkins was paying $125 per lesson and had rent to pay, “so I just stopped singing. A good year went by.”

In time, she met a director who needed someone for a small production of Faust, and Hopkins signed on to play Siébel, a young boy. The cast rehearsed in the director’s apartment, with a piano in lieu of an orchestra. On the day of the show, the cast arrived at the set, which included a wobbly barrel for a table. Despite warnings from the director, the actor playing Mephistopheles climbed on the table for his aria — and promptly fell off, injuring his arm.

“Literally, he said, ‘Is there a doctor in the house?’ Well, there was, and the doctor came up on stage and said, ‘It could be broken, and we have to immobilize it. Does anyone have any Ace bandages?’ Hopkins, who had bound her chest for her role as a boy, went behind the curtain and pulled the bandages off. The cast found a man with a cape who somewhat knew the role, gave him a score, and carried on the show.

“I said, ‘If I can make it through this, I believe I can be in this field,’” Hopkins says, laughing at the memory.

She again set her sights on the Met, auditioning for the young artists’ program. This time, it paid off. She aced the audition, and the Met paid for her lessons. But her big break came when she subsequently auditioned for Maestro James Levine, the Met’s longtime music director.

“They said, ‘Maestro Levine says you’re too old for the young artists’ program, but they would like to hire you as a soloist.’ I said, ‘That’ll work just fine with me!’”

Hopkins brings that same determination to her quest to make opera and classical music more accessible to the public. To that end, she has created a concert series, called The Diva Dialogues, with local pianist Dennis Alexander. Each show will interweave opera, operetta, musical theater, and American standards with comedy. The tour schedule should be finalized by year-end.

Working with children is another important component in her goal to bring music to the masses. Hopkins consults for the new Xavier College Preparatory High School in Palm Desert, where she is helping to develop the music program and offering input on a performing arts center.

“It makes my heart feel good to know that I’m going to be involved in getting a program started where children feel safe and productive and enlightened and are exposed to all kinds of music and being told that they — and music — are unlim-ited,” she says. “I don’t want kids going through what I went through. It made it a lot harder for me, fighting everybody. You can’t tell a kid at 17 they don’t have what it takes, because you don’t know.”

On top of fielding performance offers from around the country and planning her schedule with the Met, Hopkins is collaborating on a project in the desert that merges classical tunes with modern lyrics. She also has three books in the works — on voice, keyboard, and sight-reading — and continues lecture workshops called Essential Performer to coach aspiring performers. Fortunately, she relishes a hectic lifestyle.

“I love to travel and keep in constant motion. It’s the thrill of the next performance. It’s the need to allow myself to bring something to people that no one else has brought, because it’s personal. It’s such a rush. I really feel I’m with the angels when I’m singing.”

Hair by James Kennedy, Me Salon on El Paseo. Jewelry by Pamela Croce Turner. Mask from the private collection of Judy Vossler. Special thanks to the Annenberg Theater at Palm Springs Art Museum for use of its stage and piano.

Listen to the Diva

For a schedule of performances, go to www.janetehopkins.com