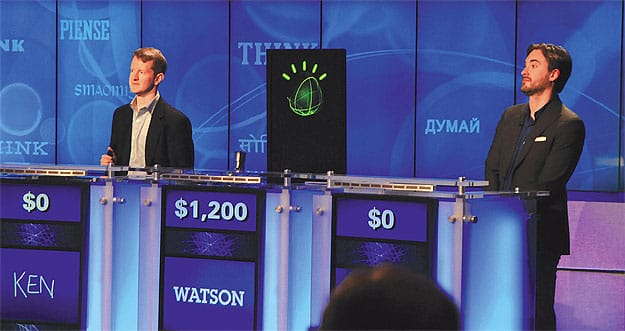 Answer: What Is Not In Jeopardy?

After exhibiting his ability to absorb vast amounts of information and then verbalize his brainpower on Jeopardy in February, IBM’s Watson is "back in school" to learn more than history, geography, and trivia.

IBM has enlisted the University of Maryland School of Medicine and Columbia University in New York to load Watson’s brain with medical textbooks, journals, and case studies so he can put his talents to greater use than winning a TV game show: helping doctors diagnose patients.

"We initially developed the Deep Question Answering technology and then applied it to Jeopardy. After that, it became quite obvious that it was a natural fit for healthcare," says Holli Haswell of IBM’s Global Healthcare and Life Sciences division.

When "Dr. Watson" is commercially available (expected in the next 18 to 24 months), physicians will be able to tap into a cloud/ web-based interface for access to IBM’s 10 refrigerator-sized servers that function as Watson’s brain. Major healthcare groups could have an actual Watson on site (IBM will sell Watson "clones"). Others can pay a use fee for web-based access to the original brain bank.

While the benefits of a massive question-answering database in the event of an outbreak or other emergency situation are obvious, even primary-care physicians can appreciate the value of having critical and timely information at hand. "They’re going to see some complex cases where Watson could be very helpful," Haswell says.

IBM is working with the universities in Maryland and New York and enlisting input from physician clients to determine the best applications for the Deep Question Answering technology and how it can help reduce healthcare costs, missed diagnoses, and unnecessary tests.

Dr. Herbert Chase, professor of clinical medicine in the Department of Biomedical Informatics at Columbia University, told a school newspaper reporter, "I have this vision that Watson will free us to do what we do best, which is to communicate with the patient."

• Creating the next generation of electronic medical record systems and computer-diagnostic and decision-support tools.

• Helping doctors reduce the time needed to evaluate a patient’s symptoms and determine a correct diagnosis. You know those people who walk aroung smiling all the time? The ones whose perpetual happiness annoys you because you suspect they’re selfishly hoarding a secret stash of happy pills?

Well, ease up on them, because researchers at the London School of Economics discovered it’s not something the gleeful could share (except, perhaps, with their offspring). As reported in the Journal of Human Genetics (May 12, 2011), some people have a natural proclivity toward being happy because of their DNA. Specifically, they have a variation in their serotonin transporter gene (5-HTTLPR).

"It has long been suspected that this gene plays a role in mental health, but this is the first study to show that it is instrumental in shaping our individual happiness levels," said researcher Jan-Emmanuel De Neve of the study involving 2,500 participants.

But cheer up if you don’t have a polymorphisized 5-HTTLPR. As De Neve points out, "Other genes and especially experience throughout the course of life will continue to explain the majority of variation in individual happiness. But this finding helps to explain why we each have a unique baseline level of happiness and why some people tend to be naturally happier than others." A clinical nutritionist certified by the American College of Sports Medicine, fitness coach, and desert resident, Cathy Serif has put her passion into book form. The Desert Detox Diet: 30 Days to Clean Eating for Life & Realizing Your True Weight- Loss Potential sets forth the principles behind a dietary approach (based on whole foods) inspired by the Coachella Valley’s "natural backdrop for living a healthy and fit lifestyle."

The book includes meal plans and recipes for a three-day transitional cleanse and detoxification phase. The co-authors of Earthing, the Most Important Health Discovery Ever? garnered a silver award in the Wellness/Prevention/Vitality category of 2011 Nautilus winners. The awards recognize books that promote spiritual growth, conscious living, and positive social change.

A retired cable TV executive, Ober developed his own business based on his philosophy that man’s loss of connection with Earth’s electric field (i.e., through synthetic and rubber-soled shoes) has a deleterious effect on health. He has established a Palm Springs-based business selling products such as pads, patches, and bands that ground the body when feet can’t be in direct contact with the earth.

You could conceivably see an uptick in the local birthrate. Rancho Mirage Fertility Center represents the Coachella Valley’s first clinic dedicated to helping people with infertility issues. The center is run by Dr. Maher Abdallah and Dr. Mazin Abdullah.

Abdallah, who earned his medical degree from Upstate Medical University at Syracuse, N.Y., is double board certified in reproductive endocrinology/infertility and obstetrics/gynecology.

Abdullah completed his training at the University of Louisville, Ky., and is board certified in obstetrics and gynecology and subspecialized in reproductive endocrinology and infertility.