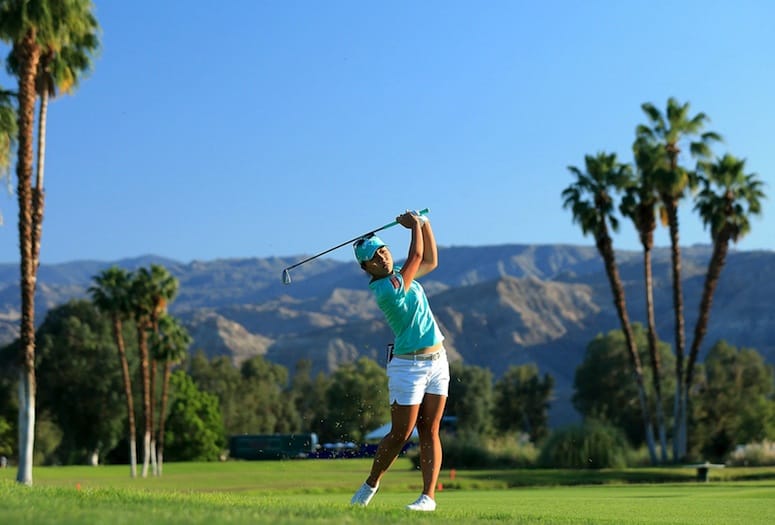 Can Lydia Ko swing her way to becoming the ANA's first back-to-back champion since Annika Sorenstam in 2001-02?
PHOTO COURTESY OF ANA INSPIRATION

At the tender age of 19, Lydia Ko, the top-ranked player in the world, already has 14 LPGA titles (and five Euro wins) to her credit.

Standing foremost among them: Ko’s victory leap into “Poppie’s Pond” at the 2016 ANA Inspiration. She is back and ready to attempt to become the event’s first repeat champion since Annika Sorenstam in 2001-02. The ANA Inspiration tees off March 27 and runs through April 2 at Mission Hills Country Club in Rancho Mirage.

The Dinah Shore Tournament Course at Mission Hills is known for rewarding experience, and the polite, personable, and mature Ko is well-aware that her major championship win in Rancho Mirage was preceded by nary a top-20 finish in her three previous tries at the ANA.

VIDEO: Lydia Ko speaks about what she learned from her previous experiences playing at Mission Hills Country Club.

“It’s a very strategic golf course,” Ko says. “It’s about positioning, and the fairways aren’t super-wide. And depending on the years, the rough can play longer, and that makes a huge difference because if you do miss a fairway you may just have an ‘OK’ lie. And when you look at the past winners it’s not all about the straight hitters; there have been some that long, some that are shorter, so I think it’s the person that plays smart and within their game is always so important. It’s not ‘One Game Fits All.'”

Since a much-publicized club change to the burgeoning PXG brand, Ko wasn’t discouraged about charting zero wins (and no top-5 finishes) in her first four events of 2017.

“I feel like I’ve gained a little distance with my driver, and that not because it’s what everybody says now,” Ko says. “I really do feel like I’ve gained that distance. And I’ve never really been a high-ball hitter, so it’s been good to see the irons go a little higher, which means they’re a little bit more controllable, especially down-wind.”

Even at 19, Ko believes she is no longer one of the new kids on the LPGA block.

“I feel like I’ve aged; this is my fourth year on tour and it goes by really fast,” she says. “My first couple of years on the LPGA Tour, I was always the youngest on tour and, starting last year, there are girls now younger and similar to my age, so I feel a lot older.”

Experience has taught her how fleeting her time as a tour player is.

“A lot of people I’ve talked to, even athletes outside of golf, have told me that the most important thing is to, ‘Embrace every moment,'” Ko says. “And I think that’s so true. Sometimes, it’s not going to be a path of flowers, where everything is exactly the way you want it to be; there will be little dips along the way. But I think the learning experiences from those are even bigger than the successes or wins at the end of the week.”