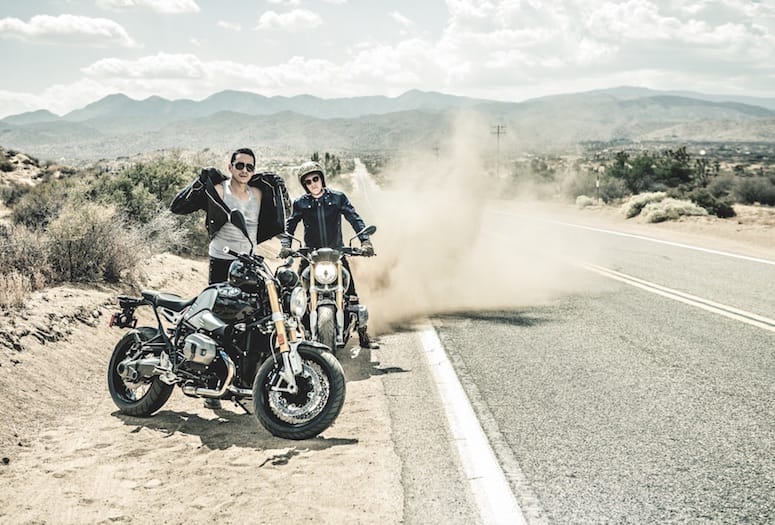 On actor Gabriel Luna’s right shoulder are his father’s initials, date of his birth, and that of his passing … two months before Gabe was born. There is also a quote from Kurt Vonnegut’s novel, Slaughterhouse Five, that sums up the fatalistic philosophy of the book’s alien race: “So it Goes.”

“All the tattoos I have, they’re basically my body telling a story,” says the 33-year-old native of Austin, Texas.

It’s been a heady year for the relative Hollywood newcomer with a featured role as doomed motorcycle racer Eddie Hasha in the miniseries, Harley and the Davidsons, and now a recurring role as Ghost Rider in Marvel’s Agents of S.H.I.E.L.D. “It’s important to me to do this job the way my grandpa did his tile- setting job, the way my grandma did her laundromat job.” 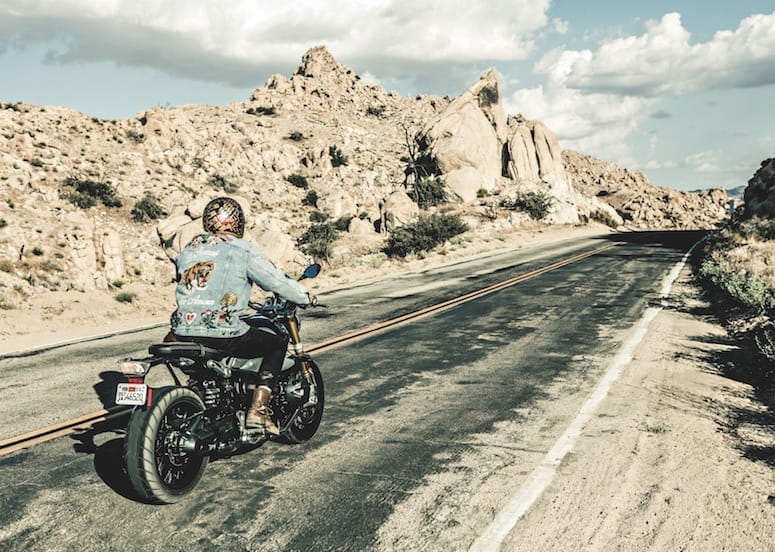 The onetime star athlete never considered a career as an actor until his senior year of high school when he dislocated his shoulder playing football. Not long after, his grandmother gave him a box of his father’s things, one of which was a videotape of his father acting in a church play. It was the first time Luna had ever seen his father walking and talking. And acting. The next day he accepted a drama teacher’s offer to try out for a play. The scene took place in front of a grave.

Luna told himself, I know what this feels like. I have stood by my father’s grave. “When I did this scene,” he recalls, “I was just reliving my own story.”

Luna’s ability to summon his life’s experiences onstage brought him a scholarship in the theater program at prestigious St. Edward’s University in Austin. After graduating in 2005, he did well with roles in film including Bernie with Jack Black and the TV series Matador, which he landed soon after he and his wife, Romanian actress, Smaranda Ciceu, moved to LA.

Hanging out after a high desert bike ride at Pappy and Harriet’s in Pioneertown, Luna’s star power radiates. It’s not because he’s “actor-y.” He’s still the quiet, polite, soft-spoken jock who stood in the corner of the acting class until it was his turn to perform. He’s a good-looking man, but seemingly devoid of vanity. His natural charisma is both indefinable and undeniable.

One of his greatest pleasures when he’s not working is hanging out with his Texas buddies like Jackson McGovern, who is part owner of a motorcycle repair shop in downtown in L.A. called Lucky Wheels Garage. Luna and his buddies often ride their bikes out of the shop into the L.A. River. The concrete part.

“When you’re on a motorcycle, you’re there and nowhere else,” Luna says. “You can’t be. You have to focus. That’s the kind of approach you to take to acting.”

When told that Steve McQueen used to ride out of his Palm Springs yard on his bikes and into the wash that ran parallel to Mesquite, Luna admits to a long-standing admiration for his fellow cyclist/actor.

“I love that he was always a man first, then an actor,” says Luna, who happened to be watching Papillon with his wife at home when he got the call for Matador. “[In the movie business], so many people want to have control over what you’re doing. What I love about [McQueen] is how he maintained his autonomy … and that’s what I want to carry on in my own life.” 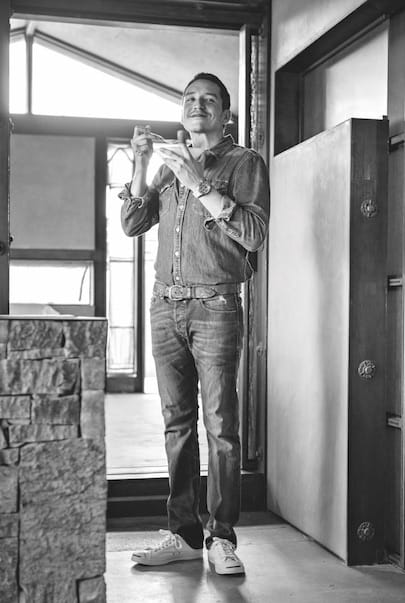 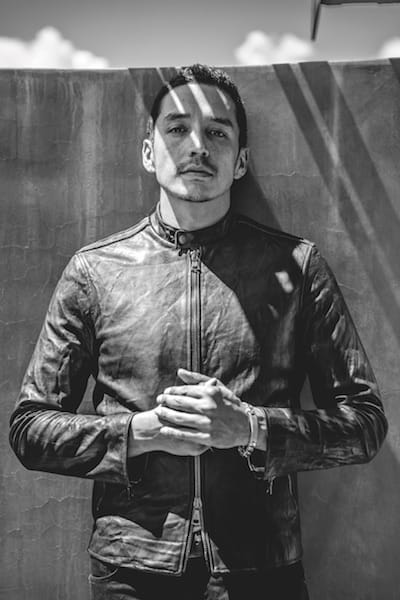 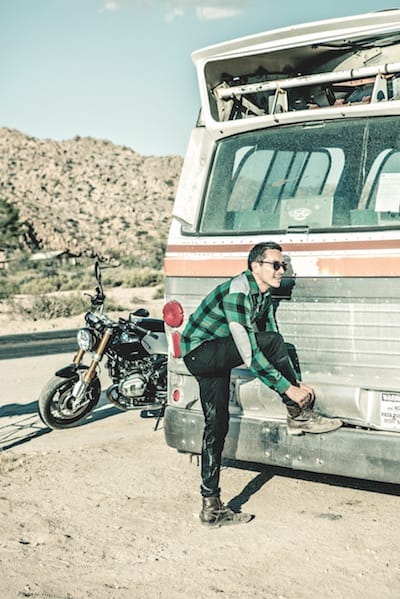 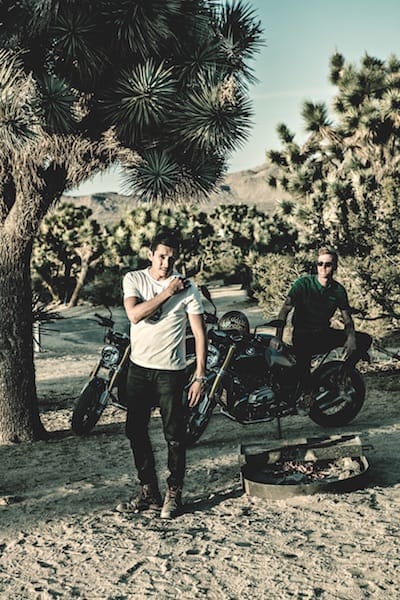 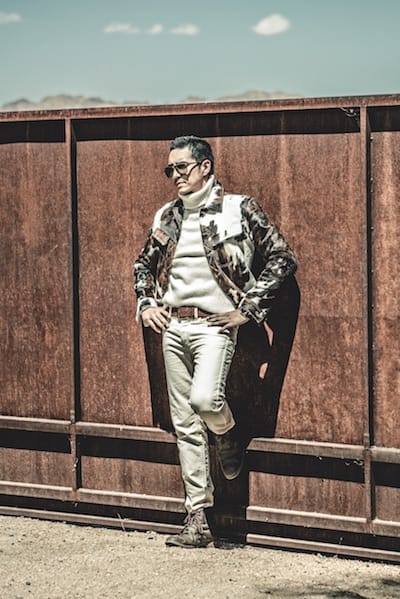 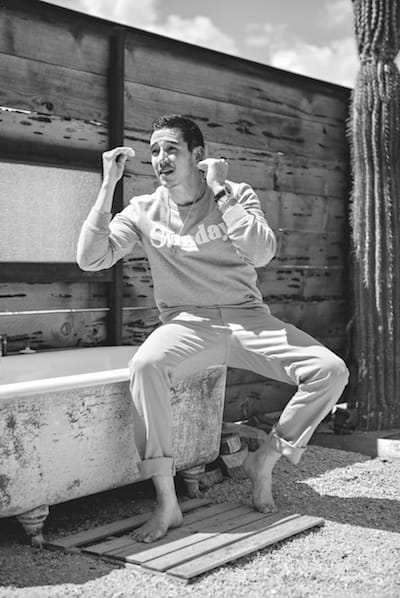 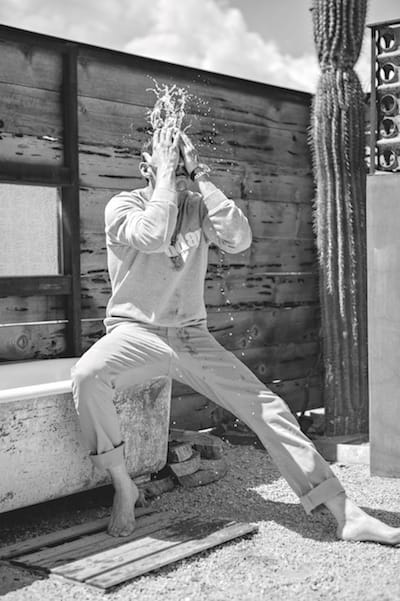 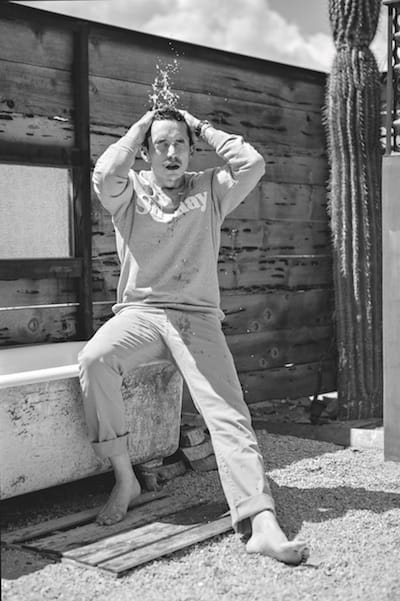 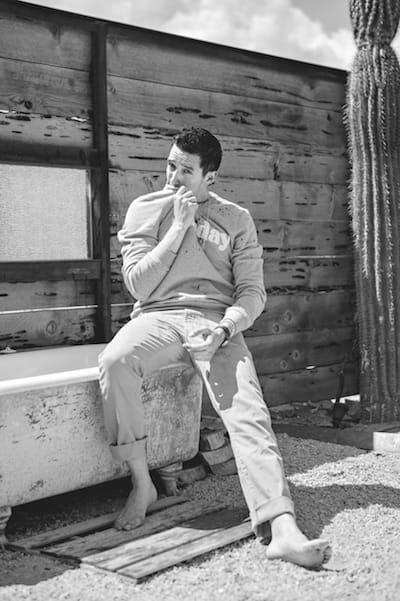 The outdoor bath at the Mojave Sands gives Gabriel Luna a chance to cool off in his Sunday sweatshirt, stylist’s own, and DL 1961 khaki jeans, $168, Saks Palm Desert. 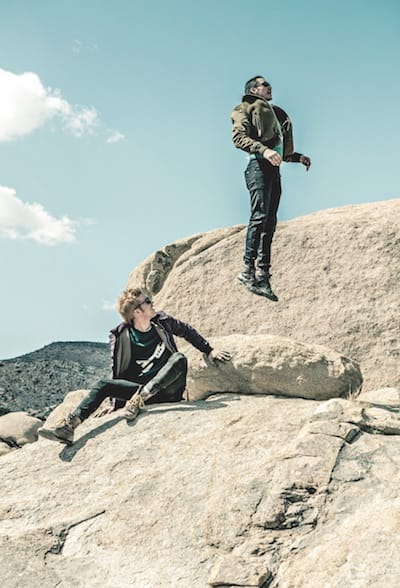 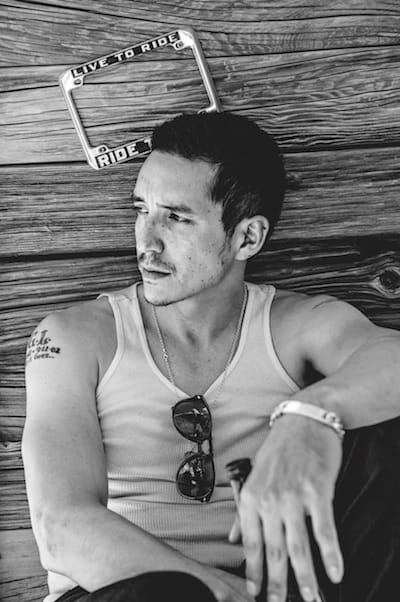 Can I take you higher?