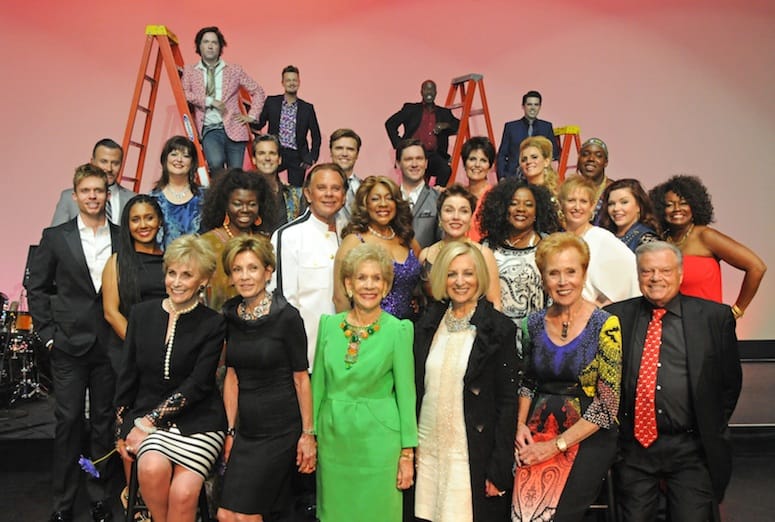 Talented producer/photographer Michael Childers presented his eighth annual “One Night Only,” a sizzling musical salute to the 1960s, on April 22 to benefit Jewish Family Service (JFS) at McCallum Theater in Palm Desert.

The Mc Callum Theatre’s sold out crowd roared with approval as some of the theatre’s most talented artists belted so many memorable songs from an era of change, unrest, tragedy, and triumph- so much reflected in the era’s music. The show was written and directed by Calvin Rembsberg with musical direction by Ron Abel.

Remsberg explained his excitement about creating a show for the '60s:

“The sixties…….well those were my teen-aged years," he said. "I went to high school and half of college in the '60s. I lived in Washington, D.C. at the time and so I very much felt right in the middle of things. I stood with my parents along Pennsylvania Avenue and watched the Kennedy funeral live. I remember it as a time of turmoil with lots of protests and marches, but I also remember it as a time that I first fell in love with popular music. I had my own 45 collection and my own little record player, and became enamored of songwriters and songs that are still with us today. Jimmy Webb, Laura Nyro, The Supremes, Burt Bacharach….these were some of my favorites…." Stephanie Anderson performs “You Make Me Feel Like A Natural Woman."

“One Night Only” brought so many musical moments to cherish: Stephanie Anderson performing “You Make Me Feel Like A Natural Woman,” Brent Barrett’s “Who Can I Turn To?” And “What Kind of Fool Am I?”, Kirsten Holly Smith belting “Son of A Preacher Man,” the “Bye Bye Birdie” medley performed by Musical Theatre University from Helene Galen Performing Arts Center at Rancho Mirage High School, and Brian Childers, who later sang “Can’t Take My Eyes Off of You.”

In addition, the sensational Callaway Sisters with Liz Callaway giving us “Leaving On A Jet Plane” and Ann Hampton Callaway’s “Blowin’ In The Wind,” Christine Andreas’ beautiful salute to Jimmy Webb with “Didn’t We?” and “The Moon Is A Harsh Mistress.” Loretta Devine gave us “Respect,” while original Supreme Mary Wilson reminded us “You Can’t Hurry Love,” Lou Christie performed his ‘60s hit “Lightnin Strikes”, Hugh Panaro wowed with “I Who Have Nothing,” while Lucie Arnaz, always an audience favorite, performed a song her mother, Lucille Ball, had introduced on Broadway, “Hey Look Me Over.” Nicole Parker croons a song from the 1960s.

The closing featured Musical Theatre University performing “Aquarius” and “Let The Sunshine In.” The sunshine stayed with everyone as the cast, sponsors and major JFS supporters ended the evening with a fun supper at EMC’s Annenberg Center.