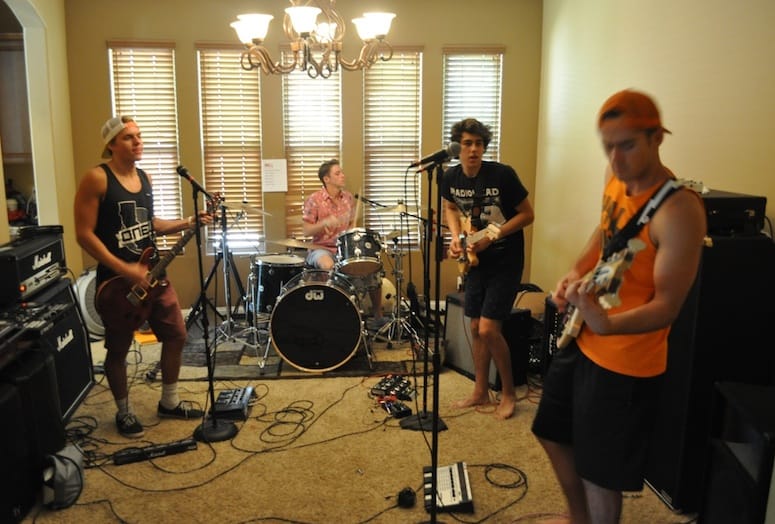 On the eve of its biggest gig ever, La Quinta-based One11 is poised to rock Palm Springs with its hearts, minds and instruments.

Evan Boydstun, Ryan Cenicola, Michael Ramirez and Matthew Sutton are four friends who have formed a band and a bond that drives them toward their ultimate goal…a successful ride as indie alternative rock stars.

The second annual Tachevah: A Palm Springs Block Party, which starts at 6 p.m. April 16 in front of the Spa Casino in downtown Palm Springs, presents a platform that could prove monumental. One11 qualified after submitting a video and receiving enough votes from its fans to be one of 10 bands invited to audition last month. They won their audition and will apper as the third local band after the Yip Yops and CIVX. Headliners CLASSIXX and Fitz & The Tantrums will close out the free show.

“We’ve worked for this. This is our home. It’s our time,” they say together.

Tachevah will be bigger than most of the 200 plus shows One11 has played over the past two years. Presented by promoter Goldenvoice between the two heavy hitting Coachella Fest weekends, the quartet is toting “artist passes” to Coachella’s Weekend Two, meaning there is an opportunity to possibly hit the stage in Indio if Tachevah promoters like what they see and have an opening to fill.

“Tachevah is really cool because it’s a unique platform for innovative music and trailblazers,’ says Evan. “New technology is incorporated into music and it’s a place to get discovered.”

There is also a mutual understanding amongst the foursome that this scene caters to a passionate crowd with an appreciation for fresh musical talent. Ranging in ages 17 to 20, One11 has elevated its sound to go beyond that of a youthful garage band. They have fine tuned their arrangements and infused new technology into the mix, validating their journey to this place and time. Sitting in the La Quinta kitchen in Ramirez’s house, it’s easy to see the band’s camaraderie and spirit. Despite their diverse talents, differing musical tastes, and often-conflicting schedules, they have found their groove.

To coincide with their Tachevah debut, One11 will release its new EP, Neat! featuring five new songs. You can download the EP for free from their website: www.one11band.com.

“There’s a lot of buzz about us going into this show,” says Ryan. “People don’t realize how important their support is to us. It makes us want to write new stuff and present a really tight live show. We are so thankful for our followers.”

VIDEO: Hear One11 play "Short: Intro", one of the songs they will play at Tachevah.