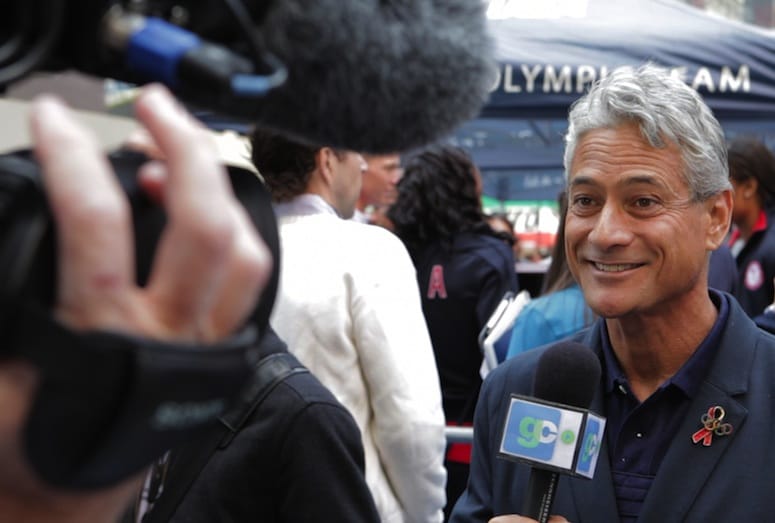 Greg Louganis will be honored by Opera Arts Palm Springs on Feb. 15 at the Hard Rock Hotel.
Photo courtesy of Greg Louganis

With the publication of his biography, Breaking the Surface in 1995 followed by a made-for-TV movie, Olympic diving champion Greg Louganis left his comfort zone behind.

The book was a coming out for Louganis both as a gay man and as HIV positive, and described an abusive relationship he endured from his partner. Louganis took his message to the gay community, but time minimized his relevance. Three years ago when filmmaker Cheryl Furjanic approached him, she told him that anyone under the age of 27 didn't know who he was.

“She wanted to change that because she said that I had such an incredible impact on the LGBT and HIV entities,” Louganis says.

So for three years, Furjanic followed Louganis and documented his battles with the economy and gay marriage in Back on Board, which screened at last month’s Palm Springs International Film Festival. Louganis attended with his partner, Johnny Chaillot (pictured below).

As he prepares to be honored by Opera Arts with the event, When I Rise, on Feb. 15 at the Hard Rock Hotel in Palm Springs, Louganis is once again encouraging others to get out of their comfort zones. When I Rise recognizes individuals who have overcome “unfair obstacles in life and have risen against the odds to become an outstanding human being.”

“A lot of people in the LGBT community stay within the community, stay within their comfort zone,” he says. “A lot of times, I go to an event, although they make me feel good, because they are very supportive, but often times those aren't the people who need to hear me. They are not the ones that need to be enlightened.” When you were able to see the completed documentary, Back on Board, was there anything about it that either caught you by surprise because you had forgotten that?

“I think the two things that really struck me in doing the film for the first time was hearing my mother's voice again and seeing her. That was really touching. Then also, a lot of times I do things but I don't think about it. When I gave my gold medal to my coach Ron O'Bryan, I knew that it was emotional for us. We lived it, but to see it on screen, it was just so amazingly powerful.”

What advice would you have for an athlete who was considering coming out?

“You know what, coming out is a process and it's an individual journey. Just follow your heart and be true to yourself. That's the reason why I admire Matthew Mitcham, the diver from Australia, because he was still competing and he came out because he felt that competing at the high level that he was competing at that he couldn't live the half truth.”

We’ve seen a few breakthroughs in the last year with professional athletes coming out. Is the general public ready to accept a high-profile athlete who is gay?

“Initially, especially in teen support to know that, I was about, ‘You're going to have to be a Wayne Gretzky or Michael Jordan to come out.’ The amount of support, that's the reason why I connected with Athlete Ally, because the focuses is to have a stronger voice and encourage our allies speak up when they are injustices, or hate speech or anything like that. It's really important to nurture those relationships of our allies and encouraging them to speak up.”