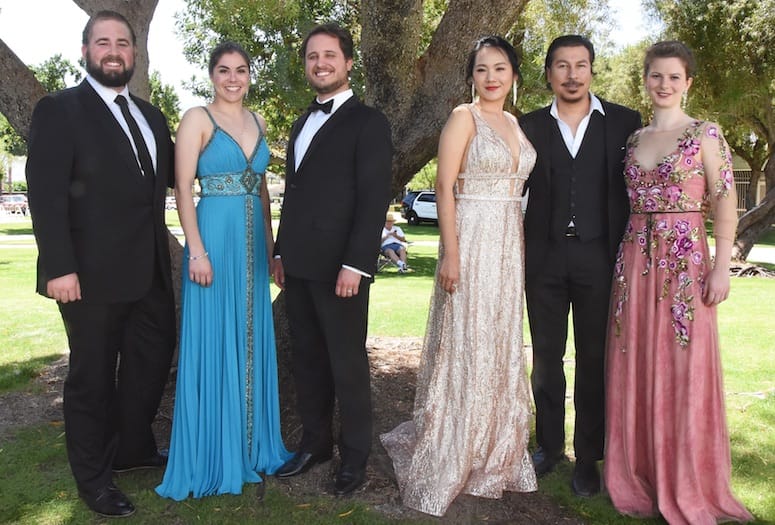 Opera in the Park, an afternoon of live performances by gifted performers accompanied by the 30-plus members of the Palm Springs Opera Guild Orchestra, presented its 20th annual program that kept the audience of more than 3,000 guests and supporters mesmerized for over two hours.

Traditionally, this gift to the community from the Opera Guild is a complimentary event held on the lawns of Sunrise Park that also includes a large shaded tent where generous supporters create elegant picnics. The Opera Guild has been working for 50 years to ensure the future of the operatic form in the community.

The tent was filled to capacity, and the surrounding lawns were also festooned with colorful umbrellas protecting guests who knew there was a good opportunity to enjoy an afternoon of top quality opera.

The program consisted of an opening overture from Gioachino Rossini’s Barber of Seville followed by a solo from the same opera. Selections from composers Georges Bizet, Giuseppe Verdi, and Gaetano Donizetti rounded out the show’s first act.

The second half began with a 100th birthday tribute to Leonard Bernstein. The overture to West Side Story and a medley of “Maria” sung by Carlos Enrique Santelli was followed by a duet of “Tonight” with Liv Redpath. The entire ensemble gathered for Turandot’s Nessum Dorma, which brought the audience to their feet for the last number.

The entire Opera in the Park ensemble have been finalists in the 2017 Dorothy Nocita Memorial Palm Springs Vocal Competition, which supports young singers with cash scholarships and performance opportunities.

Presenting sponsors were Newman’s Own Foundation, and The Augustine Foundation with John Nocita in memory of Dorothy Nocita as a premier benefactor.