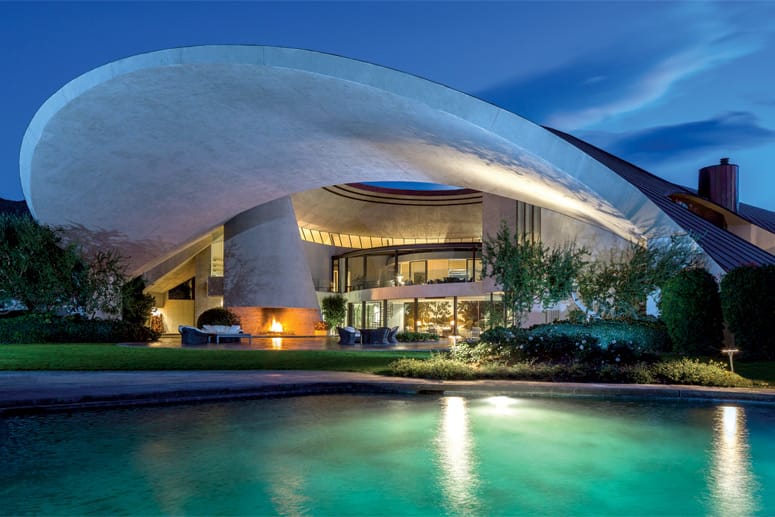 The story goes that back in 1973 when Bob Hope first saw a model of the Palm Springs home modernist architect John Lautner conceptualized for him and his wife Dolores, the Hollywood legend walked around the pool table it sat on, inspecting the model’s futuristic domed roof with a hole that opens to the sky, and cracked, “Well, at least when they come down from Mars, they’ll know where to go.”

Indeed, the home exemplifies the “organic space-age” aesthetic that established Lautner as one of the 20th century’s most esteemed architects. A protégé of Frank Lloyd Wright, he designed some 200 noteworthy projects, among them the celebrated Elrod House, also located in Palm Springs and featured in numerous films, including the 1971 Bond movie Diamonds Are Forever. At more than 23,000 square feet, the Hope House is Lautner’s largest, and perhaps most visually striking, domestic creation.

After a fire set construction back by several years, the hilltop home — which sits on 6 acres in the Santa Rosa Mountains’ exclusive Southridge neighborhood with commanding views of the Coachella Valley — was finally completed in 1980, with seven bedrooms, nine bathrooms, indoor and outdoor pools, gardens and a pond, a putting green, a tennis court, and enough room on the outdoor covered terrace to accommodate 300 guests. Over the years, the Hopes used the concrete, steel, and glass “mushroom home” to entertain and host parties, inviting such guests as Tony Bennett and Glen Campbell. In 1991, the Hopes welcomed hundreds of veterans to the house to celebrate the close of the Gulf War.

Capped by a curving copper roof that complements the sloping contours of the mountains, the home, dubbed by Dolores Hope as a “contemporary castle,” also features a dramatic, natural boulder that juts out of the lower level entertainment area and works by the famed mural painter Garth Benton, which ornament the bar and indoor pool and exercise area. The Hopes’ monumental dream estate went on the private market in February 2013 with an asking price of $50 million; now the home is listed on the open market at a reduced price of $34 million.

Location: Above Palm Springs in the exclusive Southridge community