Editor’s Note: The is the second of a two-part series on the history of the LGBTQ community featuring author David Wallace.

Liberace passed away on the morning of Feb. 4, 1987. His death was announced later that afternoon to the anxious crowd of fans who had been holding a vigil outside his Palm Springs estate since his return from Eisenhower Medical Center in Rancho Mirage three days earlier; he had been suffering from a mysterious ailment.

Liberace spent his last days cuddling his dogs and watching reruns of The Golden Girls, according to author David Wallace, whose book, A City Comes Out, details the gay and lesbian history of Palm Springs and its connections to Hollywood.

While the entertainer’s publicist claimed his death was due to complications from the fad “Watermelon Diet,” close friends knew (and others suspected) that Liberace had died of AIDS. His body was quickly removed from the house under a tent to prevent morbid paparazzi shots from getting out. The official cause of death listed by his doctor was cardiac arrest, but that didn’t sit right with the Riverside County coroner, who demanded that the body be brought back from Forest Lawn Cemetery in Burbank for a full post-embalming autopsy to confirm the results.

VIDEO: Author David Wallace reveals why entertainers couldn’t come out of the closet.

Less than two years earlier, Hollywood screen idol Rock Hudson had succumbed to the same disease, still whispered about by many at the time. Liberace’s funeral at Our Lady of Solitude Church — just a stone’s throw from his Palm Springs estate — was noticeably lacking many of the boldfaced names that surrounded him in life. “People were afraid to come,” Wallace says, “They didn’t understand the disease.”

His palatial home, also known as Casa de Liberace, remained vacant for many years with potential buyers spooked at the perceived risk of contracting the dormant virus.

In the 1980s, sleepy Palm Springs was still known for golfing retirees, aging movie stars, and increasingly the frat-tastic annual shenanigans surrounding spring break (bros doing beer bongs on hotel balconies, co-eds prancing around in thong bikinis, and belly-flop contests at the pool). But on the outskirts of town, gay life was thriving.

Now long gone, bars and dance clubs with names like The GAF, Buns, Cuddles, and Choices dotted the landscape along Perez Road and Highway 111 in still-unincorporated Cathedral City. “Establishments tried to outdo each other with special events,” recalls Jim Suguitan, former owner and editor of The Bottom Line, a free newspaper that covered the local gay nightlife scene. Sunday night whipped cream wrestling at Daddy Warbucks, monthly theme parties at Rocks, and dancing after hours at C.C. Construction Company became the stuff of hedonistic legends. “In the early days of the ’80s it was all about fun,” Suguitan says. “The gay community was not organized and didn’t realize its potential yet.”

However, Palm Springs proper was still solidly conservative. Televangelists Jim and Tammy Faye Bakker owned a home near Ruth Hardy Park and were visited by Rev. Jerry Falwell and Pat Robertson as their religious empire devolved into scandal. Yet just a few blocks away, hotel owner Fred Hardt created a local stir that made national news when he announced he was converting his clothing-optional Pines West Resort into a hospice for gay men afflicted with HIV. Mayor Frank Bogert, whose cowboy persona chafed against the increasingly vocal gay community, feared the publicity would hurt the town’s image, claiming “The whole world has got the idea that this is the place to come get AIDS,” according to a UPI report. 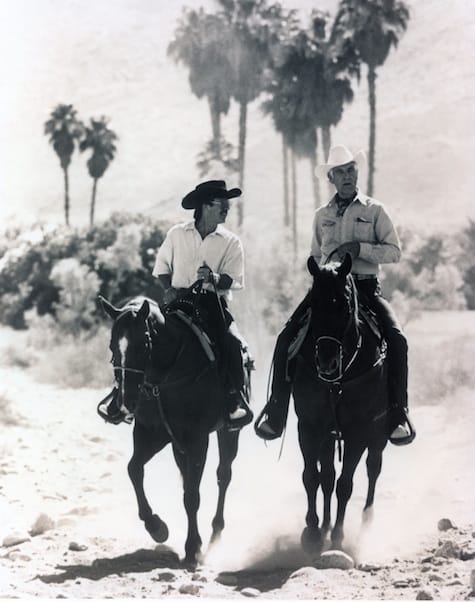 PHOTO COURTESY OF PALM SPRINGS HISTORICAL SOCIETY
An unlikely pairing, Sonny Bono and Frank Bogert, who declined to endorse Bono when he ran for Palm Springs mayor in 1988.

Throughout the nation “culture wars” were heating up, with hard-line fundamentalist Christians pitted against gays and lesbians determined to live more honest and open lives. Palm Springs was no different. But the hideaway community could no longer ignore the reality of the AIDS epidemic and began to organize. The Desert Business Association, founded in 1979 as a networking group of bar and hotel owners, began to assert itself politically. Greater Palm Springs Pride, which started out as a song and dance revue called “Sizzle” at the Riviera Hotel, soon made plans to march in the streets. And a small group of friends simply looking out for each other officially formed the Desert AIDS Project.

In 1988, full-time Palm Springs resident Sonny Bono decided to run for mayor after being frustrated with the bureaucratic red tape he encountered while trying to open his restaurant, Bono’s, on North Indian Canyon Drive. Stepping down after decades as mayor and city councilman, Bogert noticeably declined to endorse Bono, saying officially he would prefer someone with “more experience” but privately calling him a “pissant” (and by some accounts worse).

Bono’s election ushered in an acceptance but not outright openness of the city’s undeniable gay population. He was, after all, a Hollywood guy, a hippie (or at least he played one on TV), and the ex-husband of a gay icon. According to Suguitan, “Sonny was a difficult person to work with, but Bogert was openly hostile to the community.”

Bono’s wife Mary, who later succeeded Sonny in Congress after his death in a 1998 snow-skiing accident, became known for her staunch conservative stances during the Bush and Obama administrations. Still, Suguitan remembers her fondly. “She was lovely,” he says. He recalls sitting in the front row at a city council meeting when Mary Bono sat down next to him and privately whispered, “Sonny won’t admit it, but if there is going to be a renaissance in Palm Springs, it will be because of the gays.”

The renaissance did happen, slowly at first but it picked up steam as the late ’80s gave way to the early ’90s. Opinions vary as to how and why the shift occurred, but almost all boil down to what the desert was built on: real estate. Several forces contributed to the move of bars and clubs from Cathedral City to Palm Springs including the redevelopment of the downtown area along Highway 111 and Cathedral Canyon Drive and a church and school purchasing land where many of the resorts and clubs once stood. New leadership in Palm Springs finally allowed gay and lesbian bars to operate openly (spurred on by the success of the White Party and Dinah weekends). Though there had never been an explicit ban, the city council had always found a reason to deny permits and liquor licenses previously. 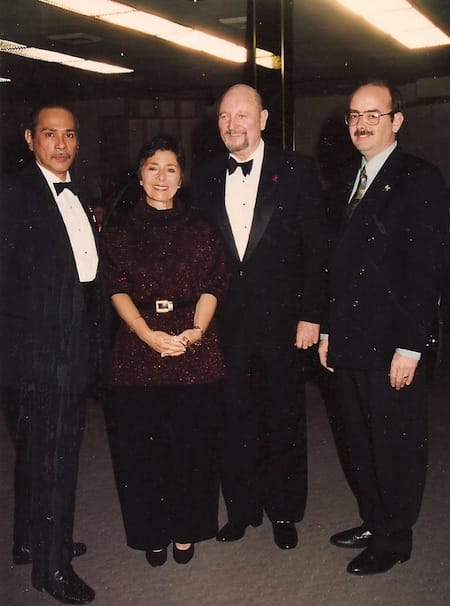 Gloria Green, whose Cathedral City supper club “His & Hers” had been a hit among the desert’s demi-monde, opened the first gay bar on Arenas Road in 1991. Usually dressed in dungarees and a cowboy shirt with a kerchief, she would hold court in a corner booth, swirling scotch on the rocks while chomping on a cigarillo, and survey the crowd at her creation: “A Streetbar Named Desire,” now simply known as Streetbar. Other clubs would follow (Hunters, Spurline, The Rainbow Cactus) to create an all-gay city block.

In his book, Wallace writes, “The city’s gayness caused a near tectonic shift in the city’s politics.” Having invested in Palm Springs, the gay community began to get more involved in government, electing the nation’s first “out” African-American mayor, Ron Oden, in 2003. Numerous gay and lesbian officials have since served openly on the City Council and in the mayor’s office (including current Mayor Rob Moon).

Today, Palm Springs ranks among the top 10 cities nationally with the highest number of same-sex couples per 1,000 people, according to census data from the Williams Institute at the UCLA School of Law. 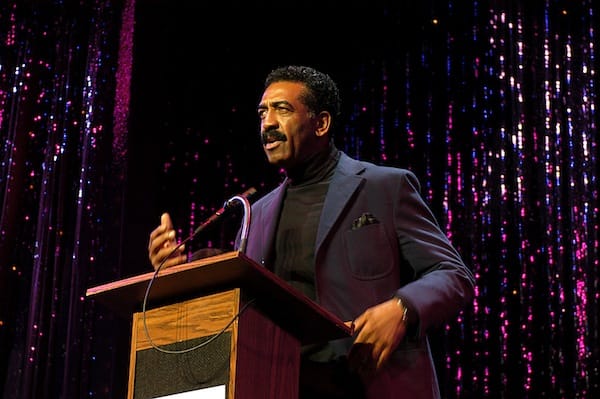 Liberace did not live to see the town he loved become this gay mecca. If he had, he might have emerged from his gilded glass closet. But when it comes to the contributions of gays and lesbians to Greater Palm Springs, like Liberace always said, “Too much of a good thing is wonderful!”

Author David Wallace will speak on the history of the gay community in Palm Springs in January 2018 at the LGBT Community Center of the Desert. His book, A City Comes Out, is available on Amazon and Barnes and Noble websites.