P. David Ebersole had a novel idea. It was criminal!
PHOTOGRAPHY BY EMILY SANDIFER

P. David Ebersole can stake a strong claim to both monikers. The to-do list of the longtime Palm Springs habitué shrinks each year. He’s already checked off co-starring in a musical with Paula Abdul (1978’s loony time capsule Junior High School), creating a lavish midcentury home with husband Todd Hughes that was featured during Modernism Week, and producing documentary films, including My Name Is Lopez, about the life of late entertainer and longtime Palm Springs resident Trini Lopez, which debuted on streaming services in April. Others include House of Cardin, Room 237, and Dear Mom, Love Cher.

Lately, however, Ebersole has crime on his mind. His first novel, 99 Miles from L.A., which will be released May 17 by Pelekinesis, exposes a timely, intricately woven bisexual love triangle between a trio of desert-based criminals that is already drawing early praise and favorable comparison to the insightful writing of greats like Jim Thompson and Joan Didion.

Simultaneously, Ebersole and Hughes will release an album, Twenty First Century Boys, from The Ebersole Hughes Company Singers, a vintage-sounding “boy band” that covers songs by artists as diverse as Elvis Presley and Hole. 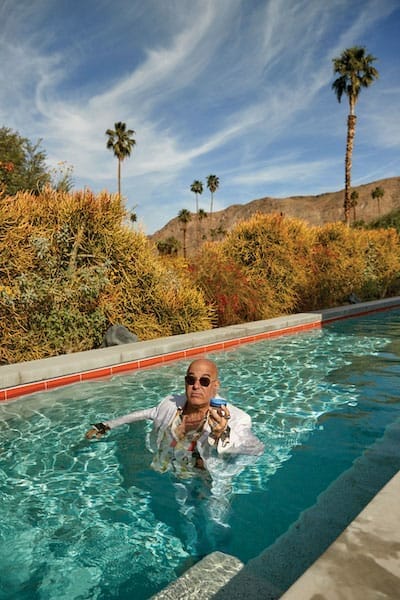 P. David Ebersole about the book's setting: "Palm Springs....offers false opportunity because it is a false city of dreams in a certain way."

Your prose is cinematic. Is fiction writing a natural progression from filmmaking?

I’ve been making movies all this time. So, the shape of the novel is such that it has that role. I purposefully made no quotation marks and wrote no dialogue.

I know the song “99 Miles From L.A.” and the lore about actors coming to the desert when they had to stay within 100 miles of the studios. Why did you choose it for your title?

It’s a very melancholy, romantic song about hoping things will turn out OK. Part of that comes about when we think that if you play by the rules, you won’t get ahead. I felt like we were in a new period of that. That kind of melancholy hopefulness for things to work out dovetailed into a parallel of the failing American dream.

What role does the desert play in your novel?

The characters commit their crime in Los Angeles and run away to Palm Springs to hide it. It offers false opportunity because it is a false city of dreams in a certain way. Part of the story takes place in Desert Hot Springs.

Your description of Desert Hot Springs in the book is unflattering.

It’s a little bit like where I grew up in Hollywood; it depends on which street you’re on, whether it’s naughty or nice.

You’re donating a percentage of book sale proceeds to Palm Springs Animal Shelter. Why is this organization important to you?

Our two dogs are both from the Palm Springs Animal Shelter. I wanted to bring attention to it and do something nice for them since they do so much nice for me. 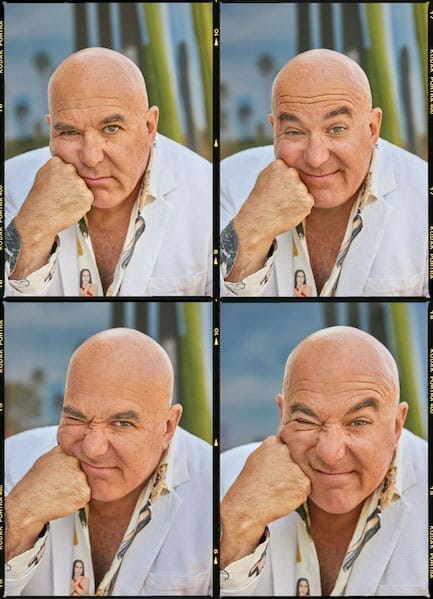 What was most surprising to discover about Trini Lopez while making My Name Is Lopez?

The thing we all should know is how difficult the civil rights movement was for Latinos. In the film, Trini says, “We had to sit in the back of the bus, like the Blacks.” It hits you like a ton of bricks. This country’s systemic racism goes pretty deep, and that he is one of those characters who figured out how to overcome it is inspiring.

You also recorded a boy band album to be released at the same time as the book?

It came about in a funny way. We were trying to put together a feature film. We were casting it, and we had this guy that we really liked, and we were gonna try to turn him into a pop star as we were making the movie. The money for the movie fell apart, so we had this record sitting there waiting to be made. What’s funny is that the main character in my novel is a frustrated singer who never got to be a pop star. Here I am creating my own record to go along with the book.