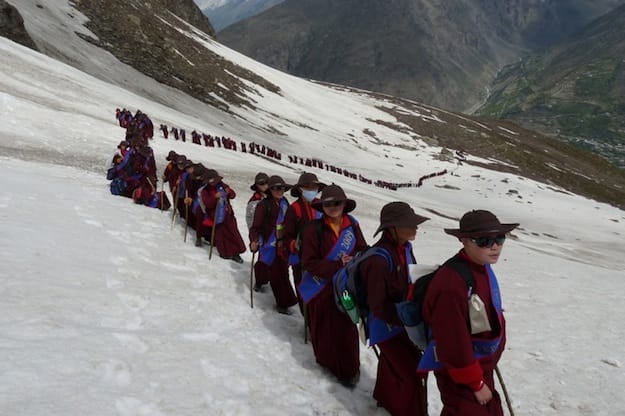 When director Wendy Lee debuted her stylish documentary "Pad Yatra: A Green Odyssey" at the 2013 Palm Springs International Film Festival, she never anticipated the warm reception it would receive.

“It’s been incredible,” Lee said, “At our first public screening we got a standing ovation. The Q&A went on quite long and it was just a really engaged audience.”

Pad Yatra chronicles the journey of 700 people across the Himalayas on a quest to save Earth’s third pole, which is a glacial region that is rife with symptoms of global warming. Along the way, the trekkers encounter a number of life-changing events, including the discovery of human remains from explorers who never made it as far as they, as well as animals that lost their lives due to extreme climate change and other natural causes.

As a participant in the mission – along with her sister – Lee detailed the hardships faced while filming, but also demonstrated the importance of restorative human interaction with the planet.

The documentary is produced by Michelle Yeoh (Crouching Tiger, Hidden Dragon) and narrated by actress and environmental activist Daryl Hannah. Hannah’s years-long dedication to issues affecting nature and sustainability was integral to the tone of the film.

“Daryl is a huge champion for environmental issues,” Lee said. “Even when we were doing the voiceover, there was a part when she just added information that she knew about the topic. It was really a nice collaboration.”

Lee’s own connection to the region led to telling its harrowing story.

“I had been volunteering in the Himalayas for many years. I had just graduated from [USC] film school. I thought this would be a really fun project to make a short film about and it wound up becoming a feature,” Lee said.

As for the message the director hopes viewers will take away from Pad Yatra, it’s one predicated less on extolling the virtues of green living and focused more on goodwill.

“I feel like the takeaway from this film isn’t the instruction manual for what we should be doing.” she said. “We all know about recycling and sustainability. It’s that what we do can and will make a difference.”

For more information on "Pad Yatra: A Green Odyssey", visit the film’s website at www.padyatrafilm.com