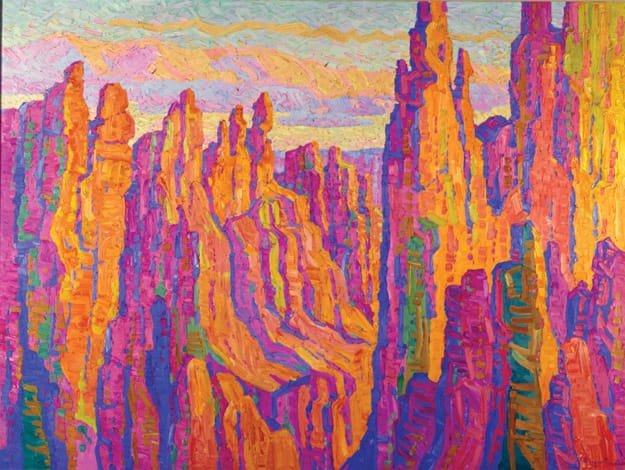 Defiant in claiming his view of the world in expressive color and composition, Birger Sandzén (1871-1954) has often been referred to as “the American Van Gogh.” An early Modernist painter, the Swedish-born artist depicted U.S. mountain ranges in blocks of vibrant colors and undulating rhythms.

His art has been exhibited throughout most of the United States and in Europe. But since the comprehensive 1969 retrospective of his work at Amon Carter Museum in Fort Worth, Texas, there has been no one-man show of his work outside of Kansas. An exhibition opening this month at Palm Springs Art Museum will be Sandzén’s first major Californian exhibition since 1948.

By the time he emigrated from Sweden to Bethany College (Lindsborg, Kan.) in 1894, Sandzén had already studied with Anders Zorn and painted at the atelier of French Post-Impressionist Aman-Jean. The former taught him to use rich color and bold brushwork; the latter instilled in him an eye for capturing light on objects.

Eventually leading the art department at Bethany College for many years, Sandzén developed a Modernist painting style and shared the beauty of art through education and gifts.

Thom Gianetto, an expert on Sandzén and co-owner of Edenhurst Gallery in Palm Desert, describes Sandzén as “gutsy, uncompromising, unreversing, All-American, all original, and inimitable, with unfathomably artistic, genius creativity.

“On a personal note,” he adds, “he was as much a kind and gentle visionary philanthropist as he was the potently powerful artist.”

“When he achieved his mature style by 1920, Sandzén helped to develop watercolor and printmaking clubs, which he expanded in the 1930s because of the Depression,” Giles says. “This revival of printmaking was called the democratic art form; it was affordable art for everyone.”

A great painter, printmaker, and watercolorist, Sandzén offered numerous pieces to educational and other public institutions. As a founding member of the Prairie Print Makers Society and of Prairie Watercolor Painters, he fulfilled his lifelong endeavor of educating young artists. Teaching summer oil painting workshops, he traveled to Utah and Arizona, where he sketched the Bryce, Zion, and Grand Canyon national parks. Back in his studio, he used those sketches to paint large-scale canvases. Sandzén painted many depictions of the Yellowstone National Forest from his travels to the Colorado Rocky Mountains, Montana, and Wyoming and became an associate member of the Taos Society of Artists.

“Although Sandzén has often been described as the ‘American Van Gogh,’ he is hard to classify,” says Ron Michael, curator of the Birger Sandzén Memorial Gallery. “He was an early Modernist, with more inventive and dramatic use of color, heavier impasto, larger brushwork, and more expressiveness than most Post-Impressionists of the time.”

Like many great painters, Sandzén believed nature is the best teacher. He dedicated himself to producing art from his travels through Kansas and farther West, including the Colorado Rocky Mountains.

“Sandzén claimed the West inspired him to use more vibrant colors, hence the name of the [museum] show: Colors of the West,” Giles explains. The exhibition includes 39 oil paintings (some 60×80 inches in size), eight watercolors, one sketchbook, two charcoal and two color Crayon drawings, and 12 prints (lithographs and block prints) from the Birger Sandzén Memorial Gallery and seven to 10 more works from private collections, including from Edenhurst Gallery.