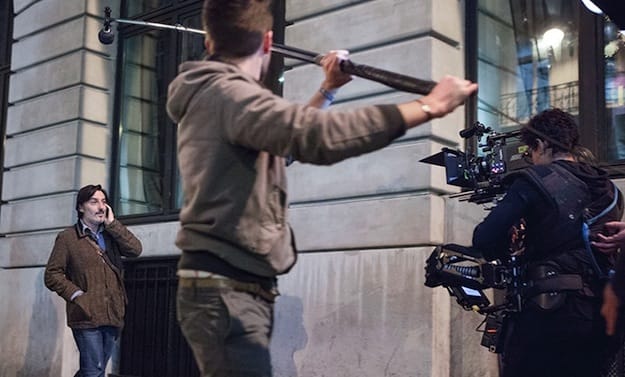 Delicate Gravity (Délicate Gravité), starring Yvan Attal and Anne Parillaud, captured Best of Festival Award. The film revolves around two lonely spirits who come together by chance when a cell phone call to a wrong number provides the catalyst for a meeting.

Director Philippe Andre received $2,000, camera package courtesy of Radiant Images valued at $10,000, and Final Cut Pro X courtesy of Apple Computer. He may be eligible to submit the film to the Academy of Motion Picture Arts and Sciences for Oscar consideration.

Stranger Brothers, directed by Lucas Delangle, collected the Panavision Grand Jury Award. The story details Guillaume’s return to the village where he grew up to pick up the car he inherited from his father years before. Once there, he encounters his stepbrother, and things get a little more complicated.

A total of $110,000 in prizes, including $16,000 in cash awards, was awarded in 19 categories. The festival enjoyed another record-breaking year in attendance for ticket buyers, filmmakers and film industry delegates.

“This has been a spectacularly successful year for ShortFest on all fronts,” said Darryl Macdonald, ShortFest programming and executive director.

Kathleen McInnis, ShortFest film curator and director of industry programming added, “Our spectacular increase in filmmaker and industry attendance brought an extraordinary breadth of creative talent to ShortFest 2013 – encouraging our belief that visual storytelling not only thrives, but is indeed an increasingly vital part of the human condition worldwide.”

Bruno roams the streets of Berlin, gazing behind the many facades and surfaces as he seeks the soul of the city. Unexpectedly, he meets an ally in his quest and immediately falls in love. But she is also on a quest, and it’s one that has her leaving Bruno and Berlin very soon.

Jury Special Mention: The Wall from Norway for its grit, humanity and creativity.

First Place: Walking the Dogs (UK), director Jeremy Brock.
Emma Thompson stars as Queen Elizabeth in this delicious rendering of the infamous 1982 incident in which a man broke into the Queen’s bedroom while her security guard was out in the palace grounds walking the dogs.

Documentary Short
First Place: Not Anymore: A Story of Revolution (USA), Matthew VanDyke
Shot on the ground with a hand held camera and told in striking first person, the Syrian struggle for freedom as experienced by a 32-year-old rebel commander, Mowya, and a 24-year-old female journalist, Nour, in Aleppo, Syria is exposed like no TV newscast could do.

Returning for a second year, the Palm Springs International ShortFest (PSIFF) continued the ShortFest Online Film Festival. Ten films were chosen to represent the Festival online. The ShortFest Online Audience Award went to Shelved (New Zealand), directed by James Cunningham. The film will be available to view on the PSIFF website for the next three months.

First Place ($2,000) – Arts & Crafts Spectacular #2 (Germany), directors Ian Ritterskamp and Sébastien Wolf.
This surreal claymation extravaganza wryly celebrates the close encounter of such disparate pop figures as Popeye and Yoko Ono during a be-in at a museum somewhere in time.

First Place ($2,000) – We Keep On Dancing (Australia), director Jessica Lawton.
Two distinctly disparate characters come together over a broken down Volkswagen Beetle in this sweet, amusing tale of love, loss and… car trouble.

First Place ($2,000) – Letters from Pyongyang (Canada),  director Jason Lee.
The tragedy of a divided Korea is powerfully evoked in this profound personal journey undertaken by filmmaker Jason Lee, who ventures with his father from South to North, across the Korean peninsula, in search of clues of his family’s unsettled past.

Best Student Animation
First Place – Harald (Germany), director Moritz Schneider.
Harald is a champion wrestler with a monster mother for his coach. Though his true love is growing flowers, coach mom doesn’t wanted him distracted by such trifles, so when she takes away his latest plant, Harald is forced to seize the day.

Best Live Action Short 15 Minutes and Under
First Place – Jump (Australia), director Aimee Lee Curran.
In a visually dazzling story about the importance of family when pursuing your dreams, Jump tells the tale of 12-year-old Edwin, a circus clown like his father, who dreams of becoming a trapeze artist.

Best Documentary Short
First Place – Empty Nest (Myanmar), director Zaw Naing Oo.
In one small pocket of Yangon, the urban center of Myanmar, Daw Ni Lang lives very modestly with her husband and young son. It’s a hard life, but she’s managed to raise four children who are all well educated… if only they would call home a little more often.

Best Cinematography
First Place: Daniel Leigh (cinematographer), The Boy Scout (USA).
Trapped in their car for days after an unexpected snowstorm strands them on a remote mountain road during an impromptu trip, Grant and Leah confront a life-or-death choice…  With another storm on the way, should they stay or should they go.

First Place – My Father’s Truck (Xe Tai Cua Bo) (Brazil/Vietnam), Mauricio Osaki.
10-year-old Mai Vy skips school one day to help her father with his passenger truck for hire. Set along the countryside of Northern Vietnam, Mai Vy is soon confronted with varying shades of morality and harsh realities as she learns how things outside the classroom really are.

The Alexis Award is selected by the Festival’s programming team and was created in honor of Alexis Echavarria, a young filmmaker, whose talent as a budding filmmaker and gift for inspiring excellence among his fellow students were cut short suddenly in 2005 at age 16.

Bridging the Borders Award, presented by Cinema Without Borders, went to That Wasn't Me (Aquel No Era Yo) (Spain), directed by Esteban Crespo.

The winner received the award’s diploma and an HP Elitebook Mobile Workstation with a built-in HP DreamColor display, an approximately $5000 value. The runner-up received a certificate for an upcoming Method Acting Intensive Workshop provided by The Lee Strasberg Theater and Film Institute with a value of $2000. The runner-up was Tryouts (USA), directed by Susana Casares.