Lily Konigsberg, Anina Ivry-Block, and Nina Ryser form Palberta, who will turn their appearance at High Desert Soundings in May into a California tour.
PHOTOGRAPHS COURTESY PALNBERTA

Friendship is a beautiful thing. In the case of Palberta, it’s the bond that allows three talented musicians to make deconstructed punk rock.

Nina Ryser, Anina Ivry-Block, and Lily Konigsberg met as students at Bard College in 2013, and since then they’ve released three albums along with a string of EPs and singles. Roach Goin’ Down, their full-length from 2018, summons the genre-defying rock and punk of innovators like Captain Beefheart, DNA, and the Minutemen. Over 22 tracks, they swap instruments and take turns on vocals, delivering short bursts of jagged glee with plunking bass, freewheeling rhythms, and guitar riffs that mutate like some otherworldly element.

“It’s pretty magical how well we work together,” Ryser says on a recent Friday evening, speaking by phone from New York as she and Ivry-Block whip up a potato broccoli frittata for dinner. “I collaborate with them more easily than with anyone else. We just have a really solid, creative bond, and it’s really magical and easy for us to write music.”

Palberta’s unique approach will be on full display when they perform as part of High Desert Soundings, a festival of experimental music happening in Wonder Valley on May 10–11. Palberta will make its inaugural appearance at the fest as part of a California tour through the month of May. The band got the gig because they are friends with the event’s director and co-founder Daniel Meyer-O'Keeffe, who also attended Bard.

“He very generously offered to fly us out there to play. We have never played in Joshua Tree, and it’s been a while since we’ve played San Diego, so we went for it,” Ryser says.

The trio may sound jarring at first: Their songs twist and turn, spiraling off into strange directions and exploring unexpected textures. But it’s not long before the listener is fully immersed. Songs like “Gimme Everything You Got, Girl” and “I Have Found the Ego” invite thoughtful interpretation with lyrics full of wordplay, inside jokes and personal reflections. They take an intuitive approach, putting playfulness and experimentation at the forefront.

“It just happened really naturally,” Ryser explains. “As we got to know each other more and continued to be in a band, we continued to play in the Palberta style.”

"When we write together, it’s so collaborative and equal, and I think we’re just having fun pretty much. It’s hard for anger to come through in that dynamic.”

Many noise-rock bands of the past were fueled by egotism and testosterone, but Palberta isn’t trying to shock or provoke. Just as Southern California trio the Minutemen promoted friendship and DIY values with their spirited funk-punk and egalitarian motto “We Jam Econo,” Palberta rewrites the rules of rock in an expression of discovery and togetherness. 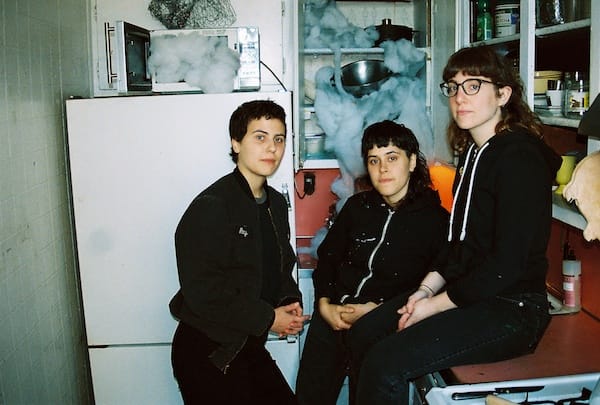 “I think that we are a pretty posi band overall,” Ryser says, using punk shorthand for the word “positive.” “I think that that comes from our dynamic. When we write together, it’s so collaborative and equal, and I think we’re just having fun pretty much. It’s hard for anger to come through in that dynamic.”

Over the past few years, the New York trio’s distinct sound and powerful live show has won them praise from critics and devoted fans. The three have had a busy 2019 so far. In March, they played 11 shows in four days at South By Southwest, the famed Austin music festival. They’ve written 10 songs for a new album, which they hope to record this winter. They’ve also booked a once-in-a-lifetime gig opening for riot grrrl legends Bikini Kill in May.

The three women are all busy with solo projects and other work as well. But even when they have time apart, Palberta always finds a way to make it work.

“We all live in different places so we all have to meet up and rehearse. Like, maybe we’ll be in Philly or upstate New York,” says Ivry-Block. “We plan months in advance to do stuff. We’re all very busy.”

And when they get together, it’s go time.

“It’s like we’re deprived of it. It’s all bottled up,” Ivry-Block says. “We let loose.”

VIDEO: Check out Palberta's rendition of "I Have Found the Ego".

WHAT: High Desert Soundings is an intimate, DIY festival happening on May 10–11 at the Palms Restaurant in Wonder Valley. A 30-minute drive from Joshua Tree National Park, the area’s gorgeous landscape, remote and silent, will offer an ideal venue for festivalgoers to immerse themselves in cutting-edge sounds from artists such as noise legends Wolf Eyes, composer/percussionist Sarah Hennies and electroacoustic innovator Audrey Chen.

“Our hope is to create an environment that is entirely focused on the music, and the relationship that develops between the music and the extreme landscape,” says festival director and co-founder Daniel Meyer-O’Keeffe.

WHERE: The Palms is located at 83131 Amboy Road, Twentynine Palms, about three hours by car from both Los Angeles and San Diego. There will be ample free parking, and a camping pass will be included with a ticket to the festival. The campground includes water and basic restrooms, though campers should take care to bring their own gear. Airbnb, VRBO’s and hotel lodgings are also available in the area.

The music runs from 7 p.m. to 1:30 a.m. on May 10. On May 11, Casey Anderson will present an immersive sound art installation early in the day at the Palms, and later on composer David Dunn will present a 16-speaker, environmentally-responsive sound art piece in the open desert; performances will begin at 6 p.m. and end at 1:30 a.m.