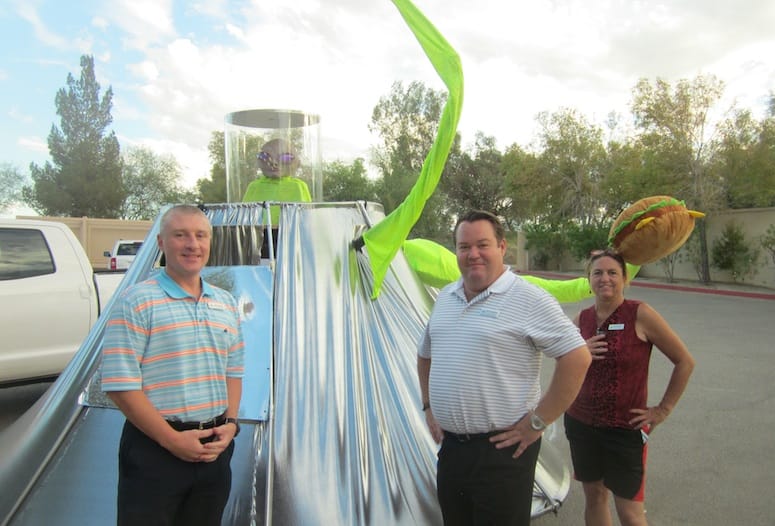 For engineer Steve Landon and his crew at Marriott Vacation Club Shadow Ridge, designing and constructing an alien space ship for this year's Palm Desert Golf Cart Parade was a piece of cake. Yet, getting the right message across about the resort was another challenge.

"We wanted to show that, although Marriott Vacation Club is a time share resort for our members, we also have a world-class grill that's open to the public," explains Landon. "So we had the alien holding a burger and a slice of pizza." Over a two-week period, Landon and his 10-person crew scrapped three designs and one partially-built skeleton.They nixed the idea of using a flatbed since it would be a golf cart pulling a float. They wanted their all-electric golf cart to be the basis of the float.

At first, they were going to build the space ship frame out of wood, but realized it would be too heavy, adding almost 100 pounds to the four-seater golf cart. Then they constructed it out of regular PVC piping that was more lightweight than wood, but didn't bend very well.

"We were using a blow torch to connect them, and that wasn't working," says Landon. A lightweight material was used to build the capsule.

The final frame was made with soft PVC pipes that are easy to bend and work with. Next came the side of the space ship that was going to be constructed with foam cor. But project manager Kristi Skelton, who came up with the original design, decided on a lightweight performance fabric.

"It's lightweight material that is worn by professional athletes like gymnasts," says Skelton, who has a degree in architecture. "We knew it would work well with the wind and a moving golf cart."

Skelton sewed the material onto the soft PVC frame. It was similar to tents that she had sewn in the past. "But don't look too close at the workmanship," she warns, pointing to the wobbly sew line. The space ship frame was also a bit wobbly for Landon's keen eye.

"We still have some circulation resolution issues," he says, meaning the spaceship refuses to stay round at the bottom. They plan to resolve it by adding a black skirt to the bottom, like a spaceship bed ruffle.

Martian Max's head was constructed from a rubber Halloween mask that was modified to turn from side to side, while his eyes lit up.

Besides light and movement, the Marriott Vacation Club's float also has sounds. Mostly ray guns going off. Barker and three others will be following the float driven by Landon. They will be wearing alien masks and gloves and shooting ray guns that make noise and entertain the crowd. Landon's next biggest challenge is transporting the alien spaceship float to the parade site. "We have to get it there the morning of the parade, and don't want to leave it overnight," says Landon.

Which means fighting traffic and wind with a float with fragile extensions. Not to mention an alien spaceship design that might attract unwanted attention from the public

For safety reasons, they plan to drive the float around the property to make sure everything works well and nothing falls off.

"I'm not worried about the speed issue so much," says Landon. "The golf carts in the parade go at top speeds of two miles per hour."

Barker, Landon and Skelton were happy with the final result.

"It was the best team building experience that we've had," Landon exclaims. "It promoted creativity and challenged us. We love a good challenge."

"We think it looks professional, whimsical and fun," he says. "We're proud of our efforts."