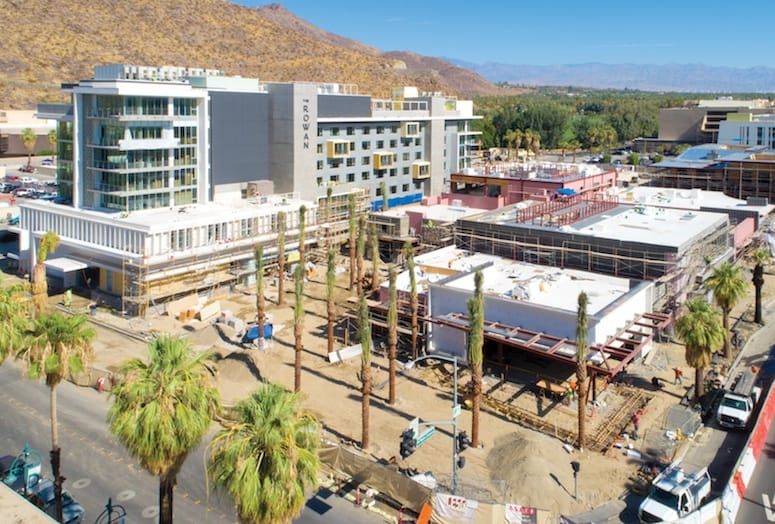 The new 153-room Rowan Hotel by Kimpton in the heart of the revitalized Downtown Project.
PHOTOS BY ETHAN KAMINSKY

Over the past decade the City of Palm Springs has worked diligently to do the impossible — retain the small-town, village atmosphere from the 1920s and still be a 21st century hotspot.

With involved leaders, residents, and businesses, that blend is becoming a reality.

The Downtown Project has been the key to revitalizing the city with its mix of retail, restaurants, office space, and hotels with a fresh face that plays on the city’s pristine midcentury architectural past. The Palm Springs International Film Festival entices industry executives and film lovers in January and the multi-generational Tour de Palm Springs adds thousands of cyclists from all over the country in February.

More events like the Splash House summer concerts in June and August and Comic Con brings 20-somethings, hipsters and SciFi/Fantasy lovers of all ages to the desert to enjoy the August heat.

These events, along with Modernism Week in February and its preview weekend in October have changed the perception of the Coachella Valley’s gateway city around the world.

For City Manager David Ready, the past 17 years have been crucial in defining the city’s goals, including a downtown that meets the needs of visitors and residents. 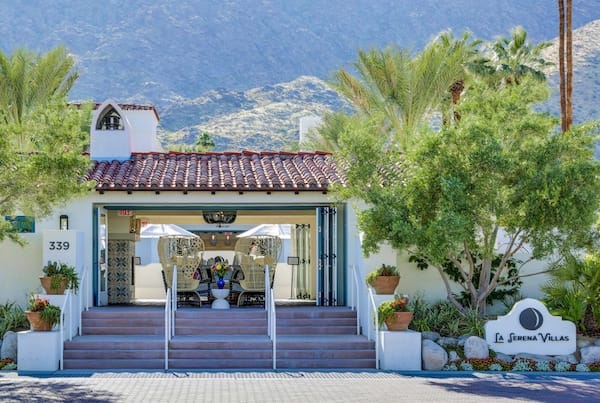 Originally built in 1933, La Serena Villas boasts 18 private villas as well as Azúcar, a gorgeous poolside restaurant and bar with a rooftop deck.

The Downtown Project, he says, plays a key role when it comes to giving visitors and residents the experience both are looking for.

We have the best of both worlds with the Downtown and Uptown districts on Palm Canyon,” Ready says. “The new hotels, retail, and restaurants, add a new demographic to the mix we are seeing.”

Summer events geared to a younger audience have seen Palm Springs bloom as a year-round destination for snowbirds from Canada and across the country to the SoCal drive market who come out for midweek or weekend visits when hotel rates are less expensive.

The number of hotels in the city has grown, and there is added interest from luxury chains that might have passed on Palm Springs in earlier years. Kimpton’s The Rowan Palm Springs, which anchors the Downtown Project on Tahquitz Canyon Way is set to open by early December 2017, according to Michael Braun, President of Grit Development. The Virgin Hotel, while slightly delayed, is expected to break ground in Summer 2018 and open for business in 2020.

These hotels, along with the Ace Hotel and Swim Club, Saguaro, Hard Rock Palm Springs, Arrive, V Palm Springs, Avalon Hotel and Bungalows, Sparrows Inn, The Skylark, La Serna Villas and Colt’s Lodge,  all appeal to different audiences, Ready said. Luxury brands such as L’Auberge Resorts, Andaz and the Dream Resort are also looking at the city because of its renaissance, he added.

With more heads in beds, the city’s Transient Occupancy Tax has risen from approximately $13 million when Ready started with the city 17 years ago “to nearly $30 million today,” he said. It is an enormously positive change in a relatively short period due in large part to the city council’s hotel incentive program. “The more quality rooms we have, the more guests and events we can accommodate in the city.”

“The new hotels, retail, and restaurants, add a new demographic to the mix we are seeing.”David Ready, Palm Springs city manager

Along with hotels and the Palm Springs Convention Center expansion several years ago, guests need places to be entertained, dine, and shop. The city is seeing new brands opening from West Elm that already has added to its space and Blaze Pizza in the Downtown Project that opened in 2016. With the completion of Phase II construction, more businesses will open between mid-November to December, Braun said, like Il Corso Italian restaurant and Tommy Bahama’s retail store and new casual concept eatery for Palm Springs. 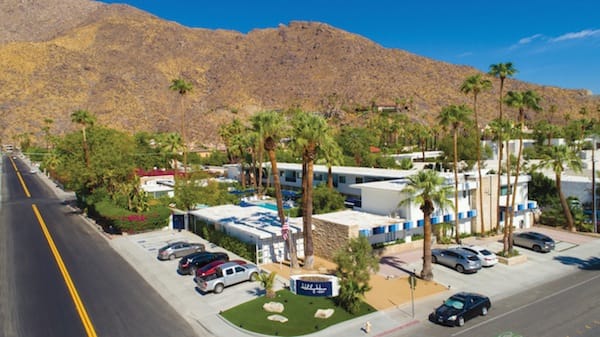 Holiday House is a 28-room 1950s-era boutique hotel that has been reimagined with midcentury elements and a whimsical edge.

Starbucks Reserve Roastery and Tasting Room, is only the third of this new concept for the coffee giant, Braun said. “The current store is too small, they need more space,” he said of the new mega-mocha experience.

Wilma and Frieda’s will open its second restaurant at The Mercado. The popular eatery was recently featured on Diners, Drive-ins, and Dives, and buzz for the store is already starting.

“Walkability” was a key element of the village atmosphere the city insisted on when it came to revitalizing downtown. “We’re the only city in the Coachella Valley that really has a downtown where you can walk around,” Ready noted. “We also wanted a place where people could relax, have a coffee and enjoy the mountain views.”

The project will have a new Downtown Park that will include a palm tree grove, performance area and Forever Marilyn, the 26-foot-tall Marilyn Monroe statue in a pose from The Seven Year Itch, facing the Palm Springs Art Museum.

“We’re working with the artist to bring her back,” said Aftab Dada, chairman of PS Resorts. Dada noted that the statue attracted interest from tourists and locals when she graced the corner of Tahquitz and Palm Canyon from 2012 to 2014.

PS Resorts has also been
instrumental in helping the city retain the Tour de Palm Springs. Event organizers had thought of changing cities because it lost riders when the Tour date changed. “The other city wanted them to change the name,” Dada said of the Presidents Birthday Weekend event. But with Modernism Week’s opening weekend, Art Palm Springs and other events in the valley all happening the same weekend, rooms were in short supply.

An early February compromise and help to get the date change information out, will keep Tour de Palm Springs “here for several more years and give everyone time to get back on track,” Dada said.

The Buzz Trolley has been a great addition for the city. “With hotels at both ends of the city, guests can park their cars and jump on the Buzz for a free ride,” Ready said. That saves traffic and parking congestion and is a convenient way to get around town. “There  are a lot of residents who also use the Buzz,” he added.

In order to keep the rides free, which draws users, “we are looking at advertising opportunities and  sponsorships,” Ready added.

The city is seeing an increase in airlines flying into Palm Springs International Airport, said Mary Jo Ginther, Director of the Palm Springs Tourism. “Frontier will begin offering direct flights to Denver this year,” she said. Along with Jet Blue flights to New York, Virgin Atlantic and Air Canada flights, airlines are looking at how Palm Springs can fit into their flight plans.

Palm Springs has long been a destination for visitors from Europe, especially the U.K. and northern Europe, and Japan, there is increased interest from China.

“Epoch Travel, one of China’s largest travel companies, is including Palm Springs on its tours,” Ginther said. “They go to L.A. and Cabazon (outlet stores) and then here.

“This is really an amazing time for us,” she added. “With the (new) airlines, hotels and tours coming, it’s really extended our ‘season,’ which is good for everyone.”