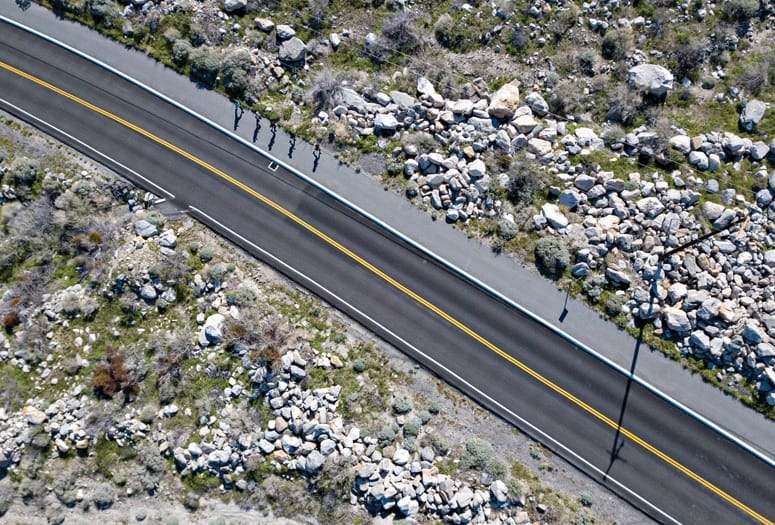 When Bill Bell trained for Ironman competitions, he rode his bicycle from Palm Desert to the Palm Springs road that led to only one place: Palm Springs Aerial Tramway. The USA Triathlon Hall of Famer then pumped 3.8 miles up the pavement, gaining more than 1,900 feet of elevation and reaching a grueling 19 percent grade at the top. He drove from Palm Desert if he wanted to tackle Tram Way on foot.

A retired aeronautical engineer, Bell competed in his first Ironman race at the age of 60. Three weeks before he turned 96, he completed his 15th Tram Road Challenge, a 6K walk/run to the tramway’s lower station.

“I wouldn’t say it’s as hard as an Ironman,” Bell said days before the October 2018 race. “But at the end, it feels almost like the end of an Ironman. The last quarter-mile is the one that kills you.”

A sign posted for the Tram Road Challenge read, “The easy part starts here.” Within 75 yards, a second sign alerted, “The easy part ends here.” But tramway engineers in the early 1960s focused on making the lower tram station accessible by vehicle (even at that elevation, signage directs drivers to turn off air conditioning to avoid overheated engines).

The faces of the runners and walkers as the finish line came into view exuded happiness, pride, pain, relief — and combinations thereof. Overwhelmed by emotion, one little girl burst into tears.

Most of the racers had recovered and were, with spectators, lined up for shuttle buses going down the hill as Bell, with walking sticks, trudged up the toughest, top section bearing the hallmarks of dogged determination. This was, after all, the hill that helped him conquer Ironman, Ultraman, and other triathlon courses (often winning his age group). Though he finished the 2018 Tram Road Challenge three hours behind the leader, he epitomizes the spirit of the event and its more than 1,200 participants.

Like Bell, Tram Road Challenge producer Greg Klein competed in Ironman and other triathlons. While living in an apartment across from Tram Way in the mid- to late ’80s, Klein used the incline as his training ground: After a 30- to 40-mile bike ride, he pedaled up the road, sailed down to his apartment to change into running shoes, and then ran the 7.6-mile “circuit.”

Billing it “the toughest 6 kilometers you’ll ever run,” Gene Rothstein (then Palm Springs High School soccer coach) launched the Tram Road Challenge in 1982 to raise money for the school’s athletics fund. Klein and Clark Sports took over producing the event in 1988 with the Palm Springs Police Department as a fundraiser for its Gang Task Force. Participants have ranged in age from 5 to 90-something (and not only Bell, who claims the 2018 race was his last).

On most days, adults (some with dogs) walk or run the curbed pavement along Tram Way’s south side. Mount San Jacinto Winter Park Authority installed the pathway in 2012 at a cost exceeding $1 million. 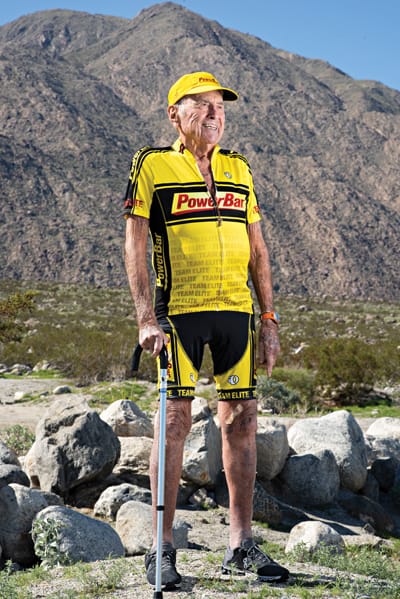 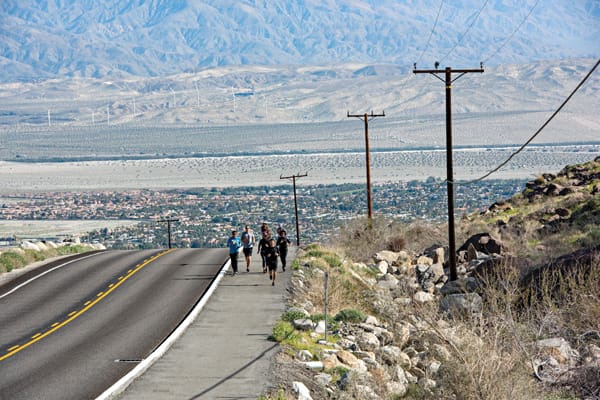 “You could run a 6K or whatever on flat ground, but that gets boring.”

Timothy McGivney lives “right across the street” and has been walking the road for years.

“I go once a week, on Sunday, as a break from my gym routine,” he says. “I walk from October through sometime in May, when it gets too hot. I usually go alone, unless I have friends or family visiting; then I try to get them to join me.

“I go halfway up, always to the same spot,” he adds, noting that the round trip takes him about 90 minutes. “I get a good workout because it’s uphill, and I don’t have to worry about tripping or spraining an ankle because it’s paved.”

Jenny Fizia-Muñoz of Indio walks the road with her husband.

“We try to walk it once a week. If we don’t have the same days off, we go on different days,” she says, adding that he usually runs to the top and she goes as far as the former tramcar (less than 900 feet from the top) or until she sees her husband coming down.

“We love the road,” she continues. “It gives us the training we need for marathons or half-marathons, and we get to greet others. People who come earlier will let you know a spot where they’ve seen rattlesnakes — yikes! — or bighorn sheep.”

A native of Palm Springs, Jesse Huskey usually runs the road with his wife. “She runs at her pace or walks the dog, and I go on ahead,” he says. “I run it once a month — more frequently when the Tram Road Challenge approaches. I go year-round, but it’s not easy in summer heat; you have to start at the crack of dawn or wait until sunset.”

Huskey has run the road for more than 10 years and participated in the Challenge eight or nine times (his best finish being 37 minutes, 29 seconds). He listens to “anything from Nina Simone to Daft Punk” while ascending but turns off the music to absorb the view coming down. Sometimes, he skips recorded sound altogether.

“At the gym, my headphones are always blaring. When I run outdoors, it can be nice to unplug — to listen to nature and the rhythm of your steps.

“People think it’s just a 6K, but running up that [road] is tough,” Huskey says. “You could run a 6K or whatever on flat ground, but that gets boring. And where are you going to run? On surface streets dodging cars? Waiting at intersections and zigzagging through twists and turns of a city? Or on a track going ’round and ’round? The tram run is special. I can’t think of many places with such an incline and protection from traffic while being so easily accessible. The tram road is something more people should do, especially locals. We’re lucky to have it.” 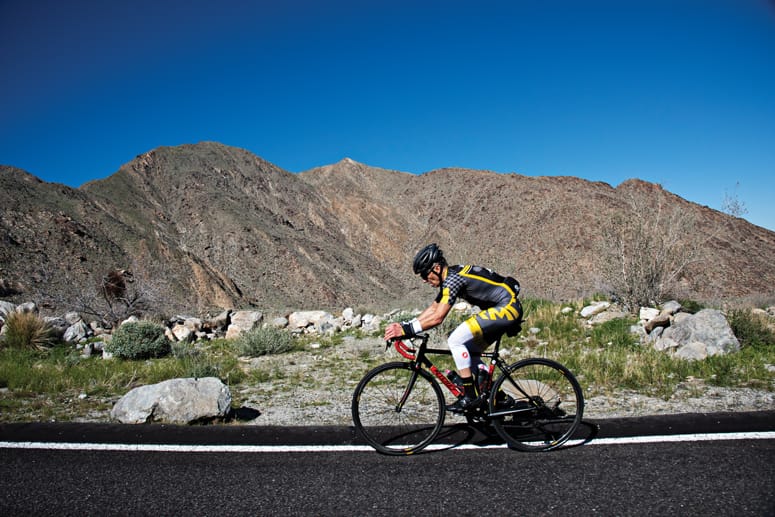 Though not as common as pedestrians on the dedicated path along Tram Way, bicyclists occasionally share the wider pavement with cars heading to Palm Springs Aerial Tramway.

“I am one of the people you will see climbing the road regularly,” says Tyler Veach of Palm Springs. He pedals to the tramway’s tollgate (cyclists are not allowed past this point, about a half-mile from the top) two or three mornings a week, in part as training for Southern California criterium (closed circuit) competitions.

“It is an awesome cardio and muscular workout,” he says.

“It’s not something you just bite off and chew. The top section is much steeper than the rest,” notes Scott McKelvey of Palm Springs, who has climbed the road alone and with Veach. (“We push each other a bit,” the latter says.)

When the full distance was open to cyclists, McKelvey rode his bike up and down Tram Way five times in a row to prepare for the 2004 Climb to Kaiser, a race north of Fresno covering 155 miles and 15,000 feet of elevation gain. In 2005 and 2006, he won the Palm Springs Tram Road Challenge, a one-way (uphill) bike race produced by Klein and Clark Sports, with
his best finish being 23 minutes, 31 seconds in 2006.

The descent presents its own challenge. Veach reports he has soared past the landscape at 50 miles per hour. “That’s not a speed most people reach, though. Only skilled [bikers] should go that fast,” he warns.

Norma Madain of Cathedral City pedals up the road three mornings a week.

“Four years ago, I started with my daughter in a trailer connected to my bike,” she says. “It was very challenging to pull her up. Now she is too big to go with me. My ultimate goal is making it to the top without putting my foot down. My desire to bike to the top without stopping never goes away.”