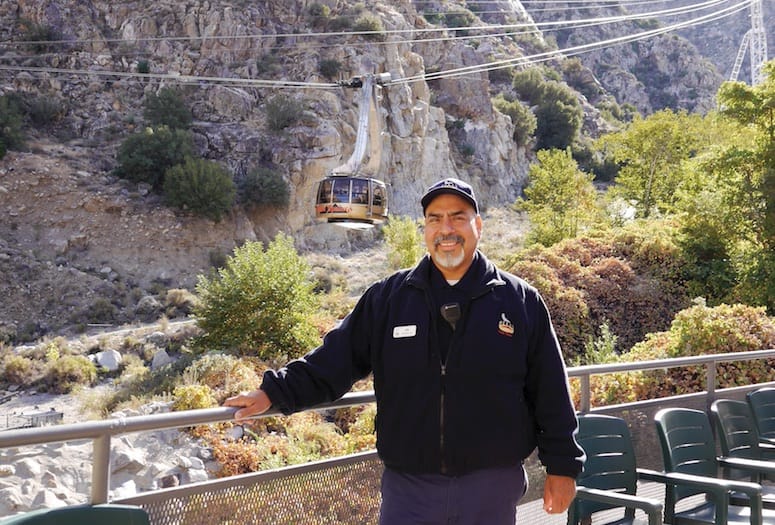 Eighteen months ago Gil Moreno read a job listing for a tram operator position with the Palm Springs Aerial Tramway Authority. “I thought they were looking for someone to drive a bus around the parking lot.”

He found out in the interview he’d be guiding the 20-passenger tram that ascends more than 6,000 feet in 11 minutes. “One of the first questions was whether I was afraid of heights,” says the Twentynine Palms native.  “I said, ‘I have a strong respect for heights.’ ”

Though the two tramcars, which run simultaneously in opposite directions 20 times per day, are operated from the tramway building, Moreno is responsible for tracking the car’s progress with an onboard computer. However, he says he wasn’t long on the job before he found that his prior experience as a barber was the best preparation for the job.

“I am constantly looking for that person who has their hands on the bar and is looking down,” he says. “As a barber I learned to talk to people one-on-one. I put my hand on their shoulder and keep them distracted. My job is to spot the panic attack and turn it around.”

Far from considering himself a tram psychologist, Moreno believes himself to be more of a tram host who is in charge of making sure his riders have a good time. To that end, he often plays 1960s R&B and encourages his passengers to sing along.

After hundreds of trips, however, his favorite ride was just himself and a young couple. “He proposed to his girlfriend and she said yes. That was pretty cool.