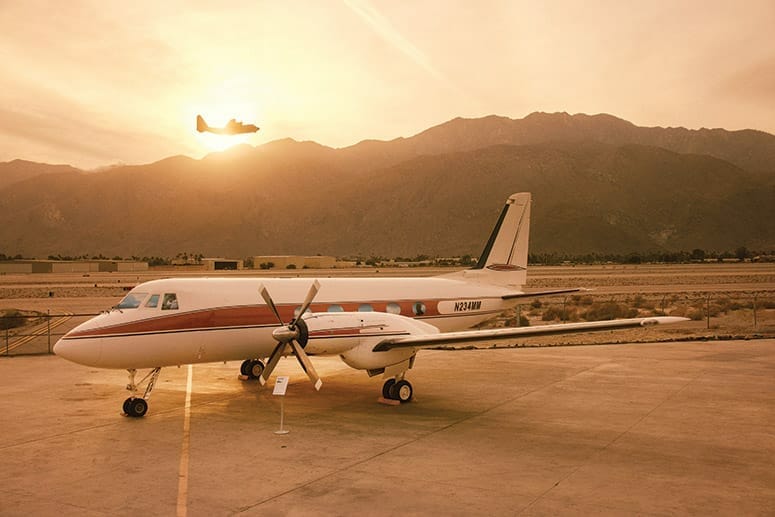 Defying the International Civil Aviation Organization’s phonetic alphabet, pilots of a plane with the tail number N234MM radioed “Mickey Mouse” for the double Ms. When air traffic controllers became familiar with the identity of Walt Disney’s plane, they followed suit.

In October 2022, Palm Springs Air Museum opened a hangar door to unveil the Grumman Gulfstream owned by the former Palm Springs resident and head of the eponymous The Walt Disney Company. On Dec. 5, marking what would have been — in a truly “wonderful world” — the movie and theme park icon’s 121st birthday, the museum debuted an exhibition revealing interior components personally appointed by the man who created “the happiest place on Earth.”

“I thought it should be in a museum,” he says. (This was before Palm Springs Air Museum opened in 1996.)

About six years ago, Bell, who joined the board in 2007 and became responsible for operations in 2011, reached out to the Disney company about the plane — by then taken off the tour and “stored” in a field on the Orlando property — but received no response. Then, in 2021, he learned someone had called the museum about a Disney airplane. “Tell them we will take it,” Bell directed.

“Palm Springs obviously has a connection [with Walt Disney]. He sold his first home at Smoke Tree Ranch to finance Disneyland and later had a second home there,” says Walt Disney Company archivist Ed Ovalle. “Also, I think Walt was very instrumental in getting the bond measure [funding the airport] passed. So, it is fitting that his plane has ended up there. 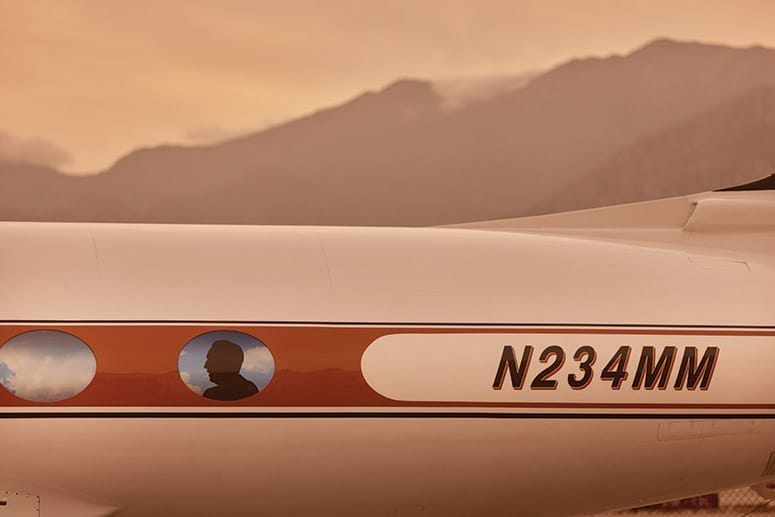 “Walt was not happy having to rely on commercial flight schedules,” Ovalle notes. “He knew that [Disney animator] Woolie Reitherman was a pilot and member of the Sky Roamers cooperative.” Reitherman arranged for his boss to charter a plane with Sky Roamers pilot Chuck Malone, especially to ease travel between Disney’s homes in Beverly Hills and Palm Springs. Malone subsequently became Disney’s chief pilot for his own corporate planes.

Though Ovalle cannot confirm it from archival records, he has seen Disney Imagineer Bob Gurr’s story of one of Walt Disney’s grandchildren seeing Frank Sinatra’s private plane on the tarmac in Palm Springs and asking why her grandfather didn’t have one too.

Disney put into service a Beechcraft Queen Air twin-engine in 1963 and the Grumman Gulfstream I twin-turboprop in 1964. He used the latter, longer-range aircraft to survey Florida for a theme park location. In 1965, he traded in the Queen Air for a Beechcraft King Air turboprop, which he kept until 1967.

“[The Gulfstream] was one of the first practical business aircraft,” Bell says. “Prior to that, most corporate aircraft had been repurposed World War II planes. Walt was ahead of his time. This was a tool he used to create the Disney empire.” 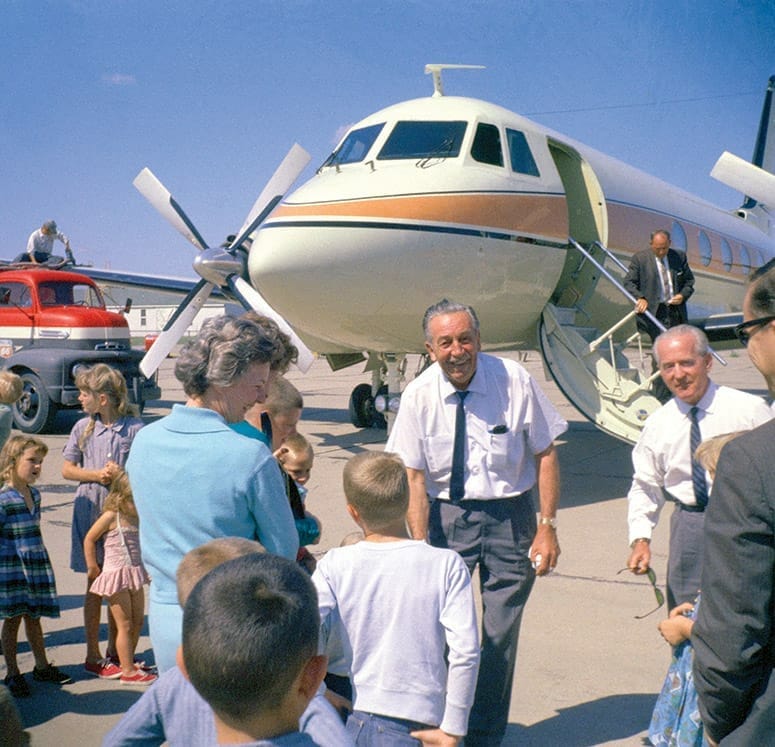 Delivered in green primer with only avionics to fly during the day, the Gulfstream received the Disney treatment and eventually became known as “The Mouse.” The exterior was painted with a tangerine orange stripe and thinner black stripes to match Walt Disney Productions logo colors. Custom interiors included a seat with a phone from which Disney could call the cockpit and a three-dial instrument panel with altitude and airspeed indicator flanking a Mickey Mouse–face clock. Disney’s wife, Lillian, reportedly chose to have translucent panels with a leaf design brought in from their residential property for elements of home on the plane.

On the ground, Disney recreated with horseback rides and lawn bowling at Smoke Tree Ranch. He and Lillian sponsored tournaments there and had trophies made for participants. He also took part in Beverly Hills and Los Angeles’ Holmby Park lawn bowling clubs but stated, “Inasmuch as I, too, have a home [at Smoke Tree], my interest for the most part is with [that] club.”

In 1964, Disney took members of his lawn bowling clubs, including Smoke Tree, on the Gulfstream to participate in the American Lawn Bowlers Association U.S. Championship in Buck Hill Falls, Pennsylvania. He could console himself in his first-round loss by taking a break from the tournament to fly in his plane to Washington, D.C., to receive the Medal of Freedom from President Lyndon B. Johnson.

Walt and Lillian Disney examine the building plans for their home in Smoke Tree Ranch in Palm Springs.

Disney was very active at Smoke Tree Ranch. He flew Disney artists to Palm Springs to work on cottage upgrades. He also took a lead role in raising money to smooth out the bowling lawn terrain. Additionally, he was a member of nearby Indian Canyons Golf Resort and gifted to the club the copper lily pad, water-jet fountain that sits between holes 9 and 18.

As Ovalle notes, Disney lent his influential name in support of a bond measure for Palm Springs’ acquisition of the land on which the municipal airport sat. A full-page ad in The Desert Sun on March 13, 1961 — “signed” by industry leaders — read in part as follows:

“One of the most important reasons we maintain homes in Palm Springs is the fact that Palm Springs has an airport and a good one. This makes it possible for us to fly in and out with a minimum of travel time. Thus, we can attend to our business affairs in our various locations and still have our homes and relaxation in Palm Springs. As a business proposition, it is good for us. As a business proposition for the community, it is not only good, it is of vital necessity. Vote ‘YES’ on the Airport Issue.”

The Grumman is the second plane at Palm Springs Air Museum to appear on film. Clay Lacy’s Learjet was incorporated into plotlines for Dragnet, Any Which Way You Can, Magnum P.I., and Miami Vice. It has the further cachet of fame in having transported Elvis, Priscilla, and Lisa Marie Presley.

In addition to Disney, the 12 signatories included Milo Bekin of Bekin Van & Storage, Leonard Firestone of Firestone Tire and Rubber, and Tom May of May Co. Stores. In the special election, 83 percent of voters approved the $3 million bond to purchase 600 acres and build a terminal, for which the city commissioned midcentury modern architect Donald Wexler.

FROM MARCH 1964 until November 1966, Disney flew from Burbank to Palm Springs 29 times. He celebrated Thanksgiving of 1966 at his daughter Diane’s home and the following day flew to Palm Springs with Lillian aboard the Gulfstream. He had not been feeling well and thought time at Smoke Tree Ranch would be beneficial. According to Ovalle, Disney flew back to Burbank aboard the Gulfstream on Nov. 30 and was driven straight to St. Joseph’s Hospital, where he died on Dec. 15. 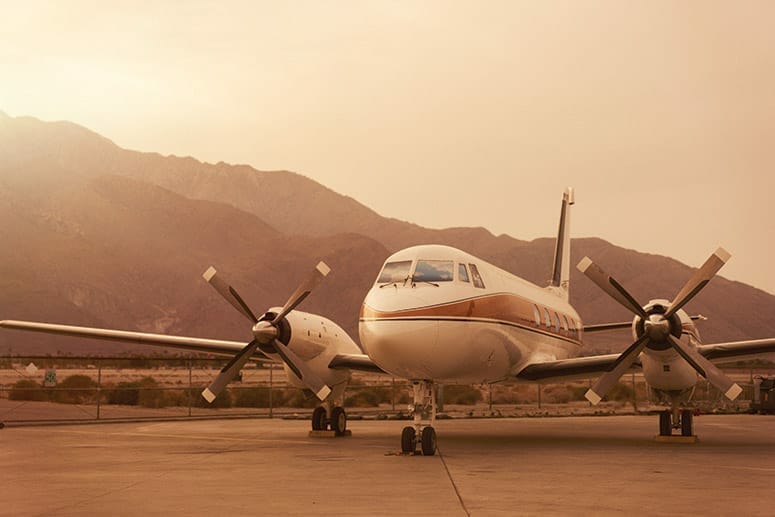 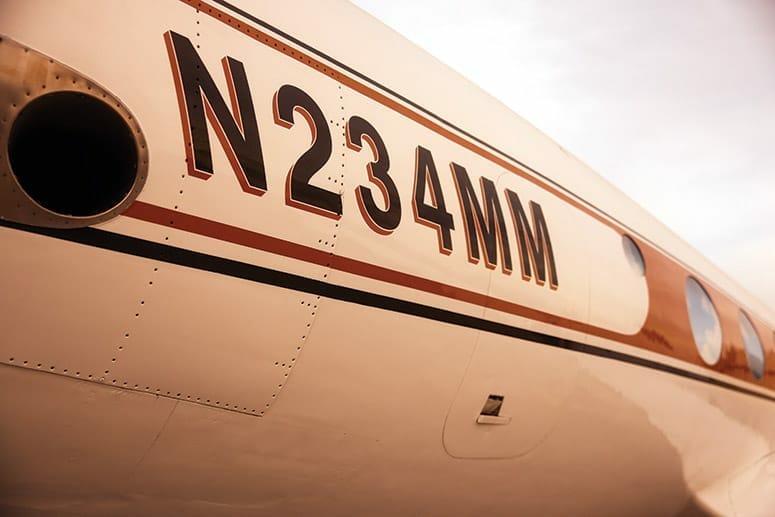 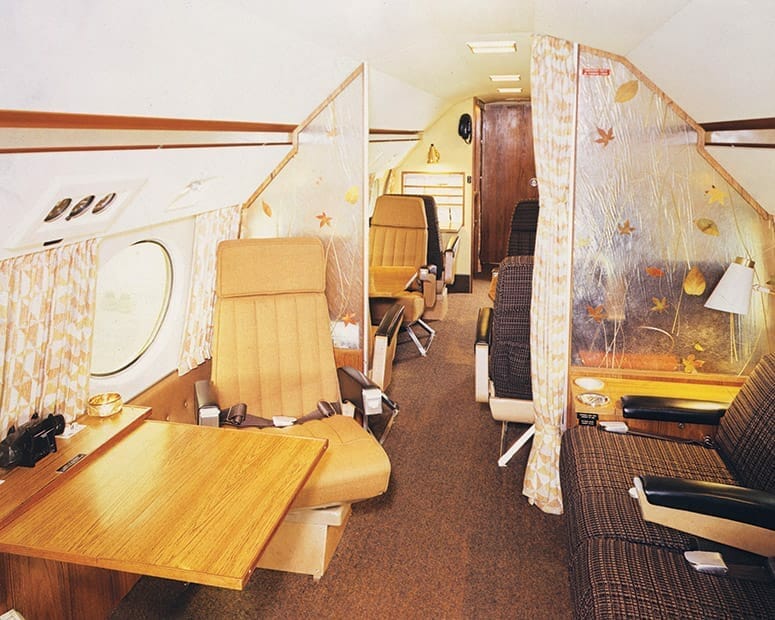 An order that Disney had placed for a Grumman Gulfstream II that was scheduled for delivery in early 1968 was canceled.

The Walt Disney Company, after its pioneer’s death, continued using the Grumman and, in 1985, painted it blue and white for promotional tours and charity events, including Disney character visits to children’s hospitals. The company retired the Gulfstream in 1992 and put it on display for the Hollywood Studios backlot tour at Disney World.

It was rescued from its exile in the back lot of Disney World in 2022 to appear at the D23 Expo — billed as “The Ultimate Disney Fan Event” — in Anaheim before making its debut at Palm Springs Air Museum the following month.

“There is a lot of historical significance that people don’t realize about how Walt Disney was involved in Palm Springs,” Bell says. “We are enlightening them and adding another layer of texture to the city’s rich history and flavor.”

—
Kurt Russell, a Disney Legend (the company’s hall of fame) who has his own residential ties to the Coachella Valley, was seen disembarking from Walt Disney’s Grumman Gulfstream in 1969 and in 1972 chased the plane on a tarmac while driving a Volkswagen dune buggy. These occasions marked the aircraft’s candid roles in Walt Disney Studios’ The Computer Wore Tennis Shoes and Now You See Him, Now You Don’t. 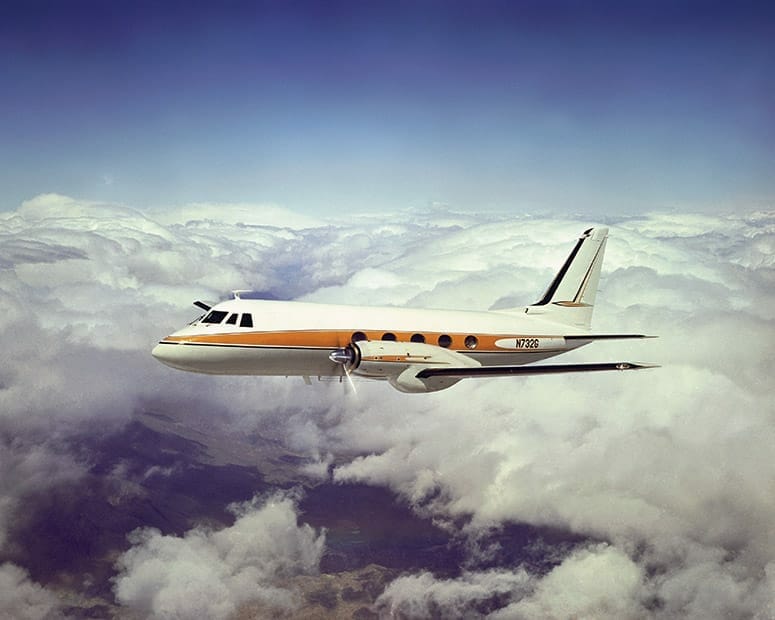