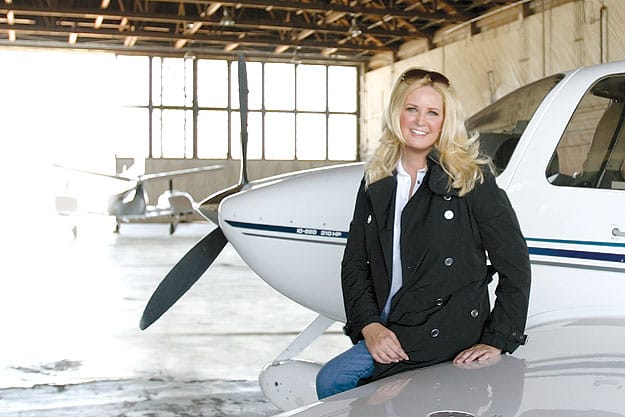 In 2008, when the CEOs of GM, Ford, and Chrysler flew by private jet to request a bailout from Congress, the backlash became a boon for a Coachella Valley jet charter service.

“Almost overnight, owners of Fortune 500 companies put their planes on the market, and the value of private jets plummeted. But people still needed to travel privately. They can charter [flights] so no one knows,” explains Desert Jets founder Denise Wilson of La Quinta. That event fell on the heels of a stock market crash that caused a lot of people to sell their planes.

“We picked up a lot of clients who left ownership,” Wilson says. She attributes the 2008 economic conditions with setting her year-old company on a trajectory toward soaring profits. The climb has continued. Revenues have grown from $128,677 in 2008 to $787,000 in 2009, $2.1 million in 2010, and $5 million in 2011. In August 2011, Inc. magazine ranked Desert Jet No. 296 on its list of the country’s fastest-growing private companies; this August, the company moved up to 69th place with a 3,750 percent growth rate over three years. And early this year, Desert Jet expanded its offices at Jacqueline Cochran Regional Airport in Thermal from 800 to 2,400 square feet.

This summer, Desert Jet added a fifth plane to its fleet, with eight pilots to fly them. And Wilson expects to expand further to meet growing demand.

Desert Jet’s core group of charter clients own second or third homes in the Coachella Valley and have businesses elsewhere in the United States. “We have a lot of Canadians who bought second homes here, and we fly a lot of people with pets,” Wilson says. “They need to travel, but don’t want to put their pets in a cargo hold.”

Clients also include people from other cities and states coming to the desert for business and events such as the Coachella Music and Arts Festival, Humana Challenge golf tournament, BNP Paribas Open tennis tournament, and Palm Springs International Film Festival. Last year, Desert Jets flew Condoleezza Rice for nine months during two book tours across the country and Canada and flew Britney Spears and her boyfriend to Puerto Vallarta for her birthday. The farthest the company flew clients last year was Turks and Caicos, Halifax, and Costa Rica.

Not including bookings through brokers, Desert Jet serves a little more than 800 clients in a year.

“We make all the arrangements for the flight, ground transportation, and meals. We find out preferences for each client and their passengers,” Wilson says of the services her company provides. “We have a client who likes his own glassware and logo items, snacks his family likes, and his own magazines [onboard]. Before every flight, we personalize every amenity for that passenger.”

A certified aviation manager with 7,000 hours of flight experience, Wilson has curtailed her own piloting. “I fly a couple days a month. When we first started up, I was the main pilot. I flew every trip. I am fortunate now we have a great staff of pilots. So I am trying to focus more on managing and growing the business,” she says, adding, “I do still try to meet all the flights.”

For those who have kept or acquired planes despite the trend Wilson has experienced, parking may be a larger challenge than the economy.

“You see $50 million airplanes sitting out in the sun,” Charlie Knickerbocker says. “And you know what it’s like here when you get sun and wind and sand.”

An aeronautical engineer and pilot who previously tested jets for Douglas Aircraft, Knickerbocker is one of two parties that have submitted plans to Riverside County for private jet hangars at the regional airport in Thermal.

“I started looking at Jackie Cochran Airport almost six years ago, and I could see the growth,” he says.

Knickerbocker Aviation plans to build nine hangars ranging from 3,900 to 30,000 square feet for sale and lease. They will be finished with tile flooring, bathroom facilities with showers, offices, workbenches, and automatic doors.

“We will be starting in the fourth quarter of this year and expect to be occupied within 11 or 12 months,” says Knickerbocker, who notes that he has lined up clients even before breaking ground.

“We are basically catering to the corporate jet world,” he adds. “We expect lessees will be people from other Southern California counties who come to the desert for a week or months.” Plans call for a full fixed-base operation with a 5,000-square-foot terminal, offices, and fuel farm.

Knickerbocker also is discussing the possibility of an on-site customs office so planes from Canada and Mexico can fly directly into Thermal.

Penny Lane Aviation, a partnership between Karl Higgins of Montecito Aviation Group in San Diego and Penny Nelson and Ann Goodwyn of Tradition Aviation FBO in Thermal, also plans to build private jet hangars — for purchase only, starting in the $500,000s. About 20 hangars will range in size from 3,600 square feet to custom hangars of 32,000 square feet. Designs call for upper-level offices and observation decks; and the project includes a social area with barbecue center, fire pit, and shade-covered patio for catered events and VIP functions.

“There are several individuals that have asked about very large hangars for very large, private aircraft,” Higgins says. “[Potential clients are] a mix of locals and a very strong presence from snowbirds in Canada and the western states, particularly the Pacific Northwest. We did a demand study with direct mail, and the response was much stronger than we anticipated.”

Runways at the airport accommodate aircraft as large as a Boeing 747. Both of these projects are on 13 acres of what is called the “heavy ramp.”

“This is the premier spot that we are trying to get built out to promote midsize to large corporate jets,” says Colby Cataldi, Riverside County Economic Development Agency assistant aviation director.

“Even though there was an economic dip,” he says, “there hasn’t been that much of a drop in fuel revenues. Jackie Cochran has been pretty consistent with its base operations.”

Understandably, the majority of traffic to and from the Coachella Valley doesn’t arrive or depart aboard privately owned planes. In the first seven months of this year, the number of passengers traveling through Palm Springs International Airport (1,109,389) put the airport well on pace to far exceed its annual count of passengers (1,495,167 in 2010 and 1,511,150 in 2011).

During peak season, airlines serving the airport fly nonstop to and from 21 destinations. “We now serve five cities in Canada,” says Thomas Nolan, the airport’s executive director. “That’s one of our fastest-growing markets.” While airlines that have been serving the airport have added routes, Virgin America entered the Palm Springs market last December to great fanfare: Virgin Group owner Richard Branson was a passenger on the inaugural flight from San Francisco (the route continues to New York).

Before the end of the year, Nolan will present the airport’s updated master plan to the Palm Springs City Council. “Our [proposed] projects address forecasted growth and facilities constraints,” he says. “The airport has experienced seven months of historic, record traffic.

“Over the last five years, we went down a path of being aggressive with spending money on capital improvements, where other institutions basically froze,” Nolan notes, adding that the recession allowed the airport to take advantage of lower construction costs. “We recognized that the Coachella Valley’s demographics were strong enough to really put us in the forefront once the recession started to soften.”

In addition to favorable demographics, Nolan attributes increased traffic to the millions of dollars of improvements made in the last five years, much of it funded through federal grants.

“We did a full rehab of one runway,” he says. “The airport has the equivalent of 80 miles of two-lane highway in pavement. That’s one of our single largest investments.”

Other major projects included construction of a $25 million, 15,000-square-foot regional concourse; modest expansion of the main terminal to facilitate passenger queuing; and a $6 million redesign of the courtyard area.

“About 60 percent of all the post-security, pre-flight boarding space is outside,” Nolan says.

“That’s what makes the atmosphere here so special.” In April 2011, SmarterTravel.com put the airport on its list of America’s 10 most stress-free airports (“Imagine waiting for your flight while sitting outside under the palms as you relax with a glass of wine.”). The courtyard, Nolan says, was designed not only for aesthetics, but also for way-finding and to add concessions, including a Starbucks.

Revenue from car rentals has increased as well. The airport invested $2 million and doubled the size of the car rental return lot. “Seventy percent of our passengers originate from 550 cities worldwide,” Nolan points out. Total gross receipts from deplaned passengers renting cars at the airport were up each of the first seven months of 2012 (anywhere from 12.4 percent to 23.5 percent over the same months in 2011). “We’ll be looking at more car rental facility growth,” Nolan says, “particularly in the maintenance facilities.”

One capital improvement noticeable even from a distance is the 150-foot air traffic control tower that replaces the 60-foot tower constructed in 1967 (when the airport was a municipal airport with a year-old terminal and 727s struggled to get enough lift to take off in the peak of triple-digit summer days). After the runway was extended in 1999, the control tower was too short for air traffic controllers to see the end of it.

The new $24.5 million tower, made possible by an American Recovery and Reinvestment Act grant, will begin operating at the end of this year or early in 2013. The base of the tower is a 7,000-square-foot building that will house electronic navigation and communication equipment, backup tower equipment, maintenance areas, and training and administrative space. The old tower will be demolished and replaced with a parking structure with solar panels to generate electricity for the new tower.

As for its recognition as one of the country’s most stress-free airports, Nolan says, “That really speaks to the caliber of product we are delivering. This is Palm Springs, and people’s expectations are very high when they fly into Palm Springs.”

Thanks to expansion of the Palm Springs Convention Center in 2005, the AOPA Aviation Summit returns to the Coachella Valley after a six-year absence. “Our goal is to create a convention with a national draw, which is why we’re returning to Palm Springs in 2012 and 2014,” announced Craig Fuller, president of the Aircraft Owners and Pilots Association. “It’s a very popular destination for attendees and exhibitors alike.”

In addition to its resort environment, Palm Springs offers something other venues can’t match: It’s the only city that allows the pilots to “drive” their planes from the international airport to the convention center. The parade takes place Oct. 10 beginning at 10 a.m. The summit runs Oct. 11-13.