You might recall the “mirror house” (Doug Aitken’s Mirage) or the massive fluorescent orange monolith (Sterling Ruby’s SPECTER), or any number of art installations from the first two editions of Desert X. Now, get ready for the third biennial exhibition of site-specific art situated across the Coachella Valley. It runs Feb. 6–April 11, 2021, and organizers tell us to expect thought-provoking installations by artists from around the world. “Health ambassadors” will offer hand sanitizer and masks as well as monitor social distancing at each art installation. Desert X announces the artists in early 2021. When the show opens, you can download a map, read about the artists, and check the schedule of virtual programs at desertx.org.

We can think of no better time than the dark days of a pandemic to absorb the introspective, contemplative paintings of Agnes Pelton. The visionary artist, who settled in Cathedral City in 1932, was known to work monastically by day and contemplate the starry sky by night, when she’d conjure images that would manifest as vaporous shapes and colors her in symbolist paintings. Palm Springs Art Museum reopens this winter with a pair of exhibitions featuring the two facets of the artist’s work: Agnes Pelton: Desert Transcendentalist, organized by the Phoenix Art Museum and most recently shown at the Whitney Museum of American Art in New York, and Agnes Pelton Landscapes, a locally drawn installation of her expansive vistas, smoke trees, and desert willows. psmuseum.org 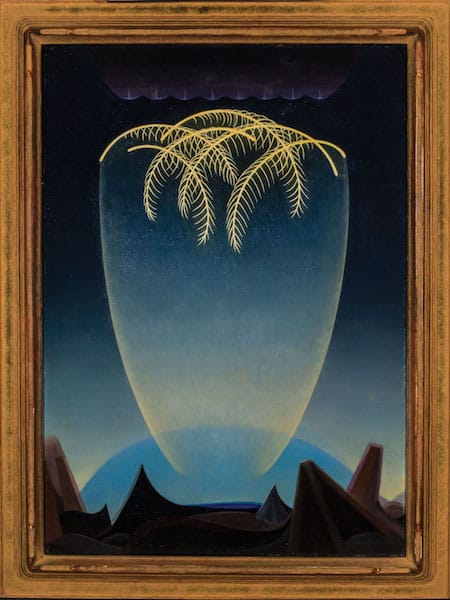 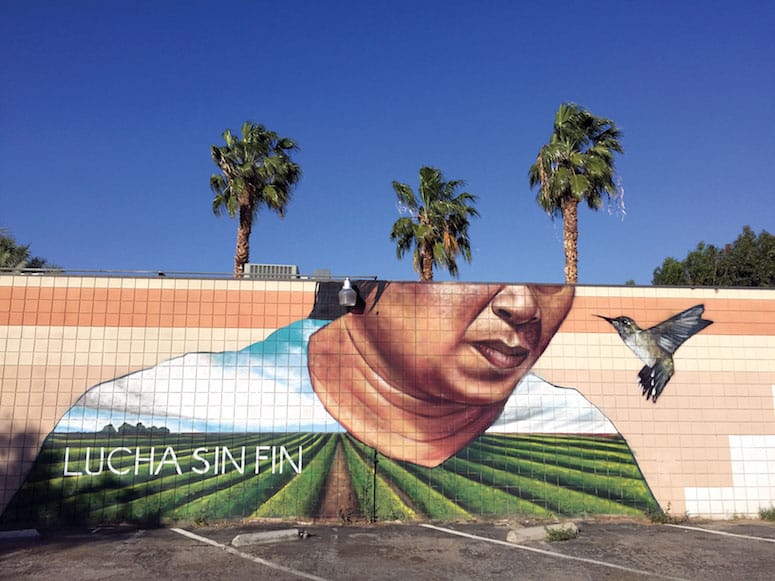 PHOTOGRAPH BY STEVEN BILLER
Lucha Sin Fin, a mural honoring women who over the years have endured innumerable struggles.

In downtown Coachella, 14 murals, all within a few short blocks, honor the life and struggles of the town’s largely Mexican-immigrant population, especially farmworkers. Artists Armando Lerma and Carlos Ramirez collaborated on the first and most iconic mural, which commemorates the 1965 grape boycott, on the side of Casa de Trabajador. Other standouts include El Mac’s Anonymous Farmworker, Said Dokins’ Mujeres Luchadoras Americanas, and Mata Ruda’s Lucha Sin Fin. The murals create a triumphant and unifying presence. We recommend ordering street tacos at Jalisco Restaurant, picking up some pan dulce at Las Tres Conchitas, and picnicking in Veterans Memorial Park. cadesertarts.org

A mile from Coachella Walls, at Sixth and Cesar Chavez streets, Italian artist Edoardo Tresoldi adds to the city’s main drag with Baroque-inspired architecture in the form of a ghostly wire-mesh sculpture. The transparent “structure,” titled Etherea, breathes with the wind and clouds, its optical effect changing with the light, atmospheric conditions, and the perspectives and dimensional relationships that viewers control by their position within it. Etherea is a space dedicated to a simple action: staring at the sky, observing the clouds. It’s a portal for contemplation. 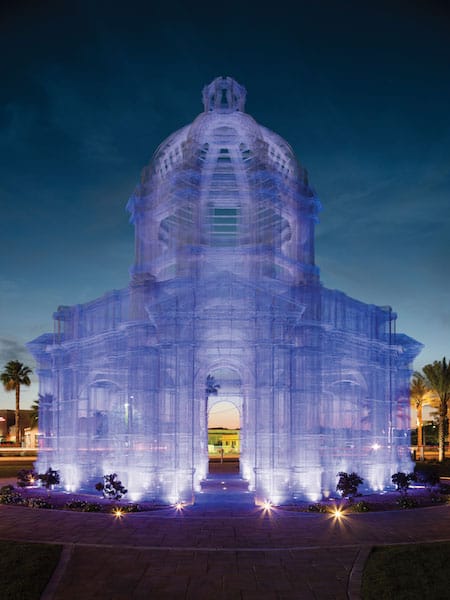 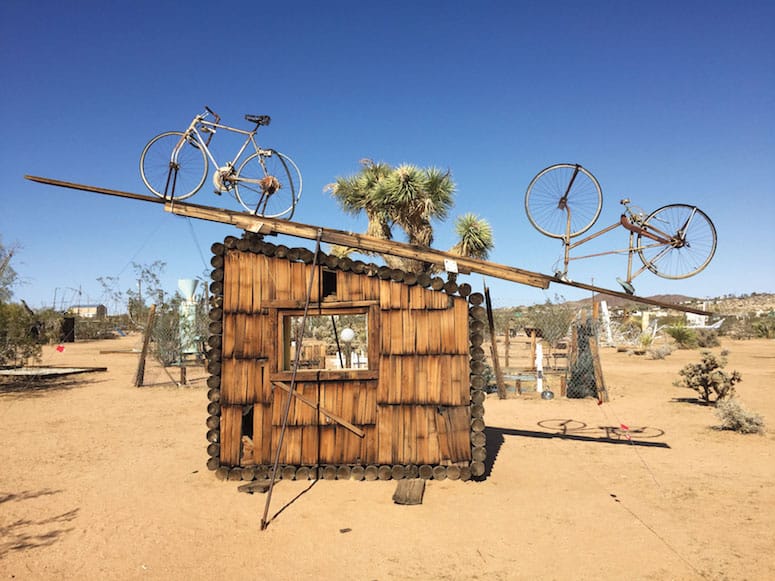 PHOTOGRAPH. BY STEVEN BILLER
Noah Purifoy’s No Contest at the Noah Purifoy Museum of Assemblage Art.

Joshua Tree National Park isn’t the only High Desert attraction. Point your navigation to 62975 Blair Lane in Joshua Tree, and you’ll arrive at the Noah Purifoy Outdoor Museum of Assemblage Art. Purifoy, who died in 2004, was one of the most revered American sculptors working in assemblage. An Alabama native, he landed in Los Angeles after serving in World War II and moved to Joshua Tree when he could no longer afford city life. He created the open-air museum to exhibit his monumental artwork, including Ode to Frank Gehry, Gallows (his last and most political work), and No Contest, one of the most photographed installations, which consists of two bicycles atop the façade of a homesteader cabin. noahpurifoy.com 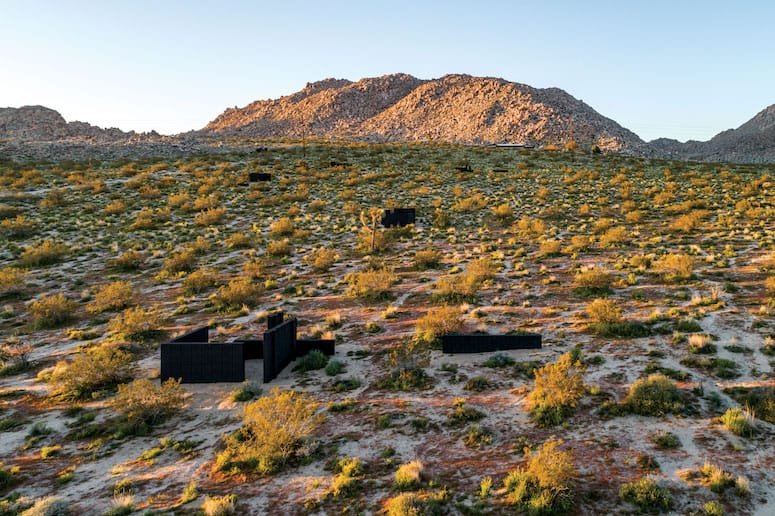 East of the entrance to Joshua Tree National Park, at Highway 62 and Neptune Avenue, 10 black-painted concrete Planar Pavilions appear over 11 acres below artist Andrea Zittel’s private residence and studio. They might remind you of the monoliths in Stanley Kubrick’s 2001: A Space Odyssey, but these consist of not one, but a series of vertical planes functioning as walls, boundaries, and divisions: “These planes frame the surrounding landscape, isolate inside from outside, and provide physical and psychological forms of shelter,” Zittel says. “As the desert becomes increasingly developed, the pavilions function similar to ruins, or structures still in a state of construction, as an interstitial zone that is neither fully domesticated nor completely wild. In this instance, the structures function both as architecture and as an extension of the landscape itself.” Presented by High Desert Test Sites, the installation is open to the public during daylight hours. zittel.org

Bombay Beach, a tiny town situated below sea level on the east coast of the Salton Sea, was all but wiped out by a pair of tropical storms in the mid-1970s. It filled like a bathtub, destroying the homes and eateries along the coast. What’s left of the town has become a canvas for artists who’ve begun snapping up and transforming these properties into public art. Visitors find the Bombay Beach Drive-In, Bombay Beach Opera House (adjacent to the Bombay Beach Botanical Garden), and Angler Grove, which artist Randy Polumbo describes as “a psychedelic human terrarium in the bones of a dilapidated bachelor pad.” Polumbo is also responsible for Lodestar, a real airplane nose-diving into an empty lot. The artists want to bring attention to the looming environmental and public health crisis at the sea and instill a sense of pride in place among the town’s 300 residents. 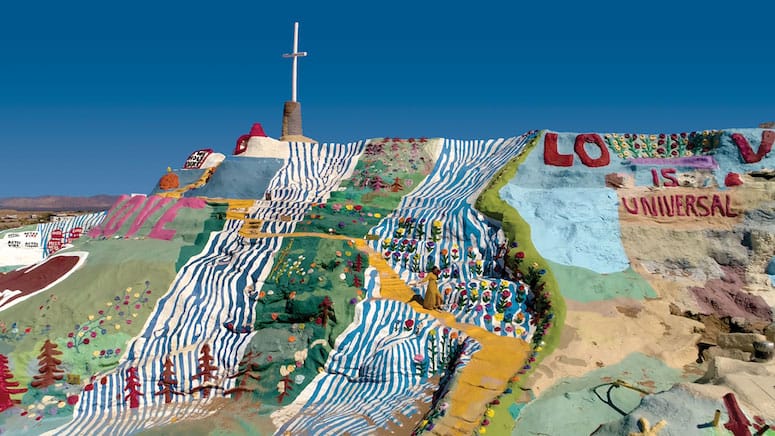 A 20-minute drive south from Bombay Beach leads to Niland, home of the late Leonard Knight’s Salvation Mountain. The Vermont native found God — and then Slab City, named for the slabs of concrete left from the former army base that once occupied the land. Knight’s monument started with a few bags of cement and cans of paint, and then others began donating materials. Eventually, it collapsed and Knight rebuilt it with durable adobe clay and more than 100,000 gallons of paint to seal the structure. Now, his colorful masterpiece attracts visitors and spreads his hopeful message: God is love. Another attraction at Slab City is East Jesus, an art garden not to be missed! (First, visit eastjesus.org.) salvationmountain.us

• READ NEXT: A Sculpture Garden is Growing on El Paseo.