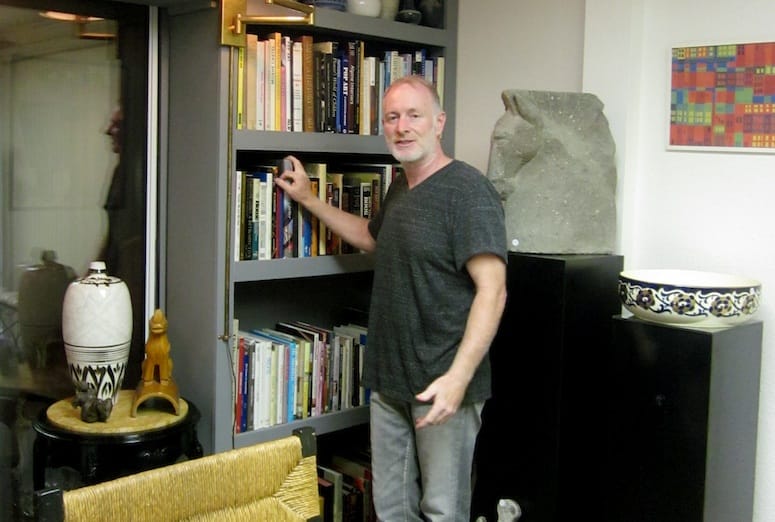 For years, Shawn Savage sold paintings at art fairs in Los Angeles and Palm Springs, while building a client base.

Some even landed in movies, like “The Bad News Bears.”

Now he owns a Palm Springs art gallery that resembles a hip home, where he is carving out a niche as a prolific painter, confident salesman, and wise mentor.

His latest show, “Grand et Petit”, featuring his own work along with sculptor John Neumann and painter Cesar will open at 7 p.m. Aug. 31 at The Savage Gallery, 870 E. Research Drive, in Palm Springs.

Savage opened his gallery in 2010 when:

• He had lost his home and his work wasn’t selling fast enough.

• A friend suggested raw space in a business park, where the landlords would give him a price break.

If You Build It

Savage put up drywall, installed lights, painted floors and decorated the gallery like a Palm Springs home. As a former antique storeowner, Savage knew the value of showcasing art alongside furnishings.

“Here, you can relax and live with the art,” he said.

The show will feature big and small pieces by Savage, Cesar, and minimalist sculptor, John Neumann.

“John’s pieces are so wonderful, they make everything around them look better,” Savage said about the Desert Hot Springs sculptor who has sold pieces to foreign governments.

Savage met Cesar at a yard sale a year ago and has been mentoring him ever since. Cesar has compiled a series of realistic fish paintings for the show.