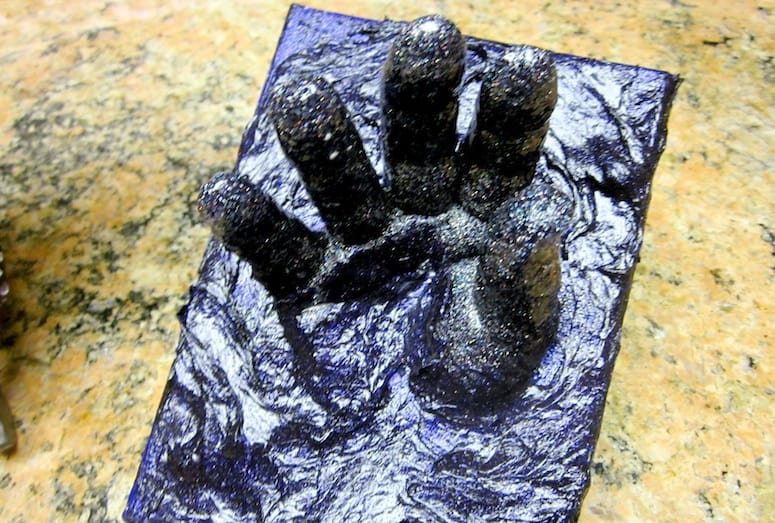 A well-known artist or even your favorite celebrity could be the creator of a piece of artwork for $99.

That’s part of the fun and mystery of Palm Springs Art Museum’s annual fundraiser, “99 Bucks” set for April 12 at the Riviera Palm Springs. Admission is free.

Each of the 700 or more original works of art donated by artists was signed on the back, so the identity of the artist is not revealed until you buy the piece.

“Last year, a woman bought a dog painting because she likes dogs, but she was thrilled to discover that it was created by Kaye Ballard,” says Bob Bogard, marketing director for the Palm Springs Art Museum.

Some of the 22 celebrities who submitted canvases this year include Amy Alcott, Lou Ferrigno, Galvin MacLeod, Lorna Luft, Jerry Mathers, Elaine Paige, and Mickey Rooney, who passed away April 6.

VIDEO: Bob Bogard, director of marketing at the Palm Springs Art Museum, describes some of the types of art submissions for the "99 Bucks" event.

Bogard works year round asking celebrities to create artwork for the fundraiser that last year generated more than $40,000 for educational programs.

“Whenever I’m at an event featuring a celebrity, I always ask,” Bogard says.

Clothing designer Bob Mackie was among those who participated over the past three years.

“He used to dress Cher and Carol Burnett with all of those sequined and beaded gowns,” Bogard says. “You can imagine what his canvases looked like.”
Bogard says they are expecting 1,200-1,500 attendees and will sell a majority of the 700 canvases. Within the first hour, last year’s fundraiser sold 400 of the 600 canvases. Most attendees purchased more than one.

“The only stipulation we ask is that artists start with a 5-inch-by-7-inch canvas,” Bogard says. “Whatever they do from there is up to them!” Some artists remove the canvas, and use the frame to build a sculpture, while others add mechanics and make a clock with a pendulum.

Even though the submission deadline was March 31, Bogard says the museum will accept artwork up until the last minute. However, late arrivals may not get into the program.

“The beauty of this event is that anyone can own artwork from well-known artists for a fraction of the cost,” he says.

“It was a beautiful gilded Buddha, but I couldn’t afford her work otherwise,” Bogard admits.

“Mistress” of Ceremonies Bella Da Ball, aka Brian Wanzer, will keep the event lively by announcing celebrity sales. Raffle tickets for luxury gift baskets are also for sale for $9.99. Any artwork can be framed onsite.

To preview the canvases before Saturday’s event, visit www.fineartamerica.com/profiles/99-bucks.html