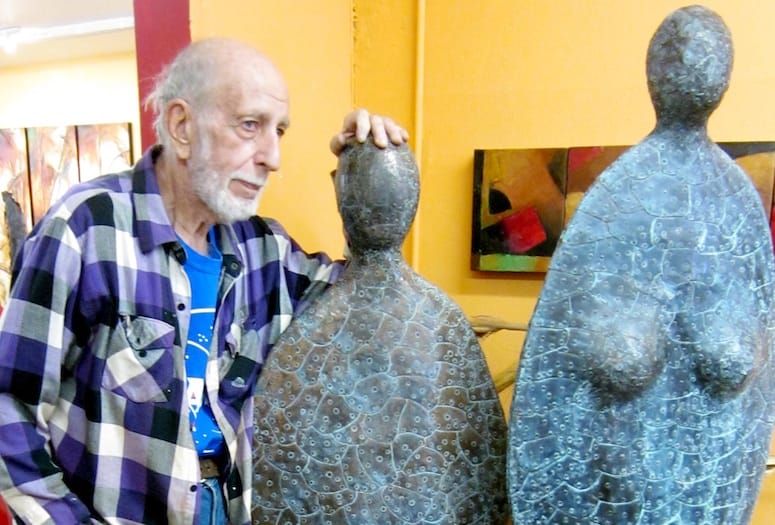 The series of four that he’s currently working on look more like creatures from the deep.

“When I decided to become a full-time artist at age 55, my wife divorced me, and my kids stopped talking to me,” says Anson, now 79. “But you’re really not an artist if you only work on weekends.”

Anson has co-owned other galleries over the past 18 years, namely the Jake Dent Gallery, Art First in the desert, and the River Bend Gallery in Northern California.

He began taking classes in ceramics, and eventually moved to wood and steel. Over the past 25 years, he’s amassed an impressive body of work with a Bauhaus style that marries form and function, but is void of ornamentation.

“When you look at Bill’s stuff, you see Bauhaus,” says Francisco Vargas, who owns the gallery next door.

During Word War II, Bauhaus artists like Mies van der Rohe moved to Chicago, where Anson grew up. However, he considers Los Angeles architect Frank Gehry as his biggest inspiration.

“Gehry designs buildings like Disney Concert Hall (in Los Angeles) intuitively, like an artist would,” he says of Gehry, who is best known for the Guggenheim Museum Bilbao in Spain.

Anson works primarily with cedar plywood to saw, glue and shape a sculpture. Then he covers it completely with small copper sheets secured with silicon-bronze nails.

Anson first saw this “fish scale” application at another artist’s gallery in San Francisco. But it may harken back to the 12 years he spent working as a mechanical engineer for NASA subcontractors Lockheed Martin and General Electric. Anson remembers being asked to inspect a rocket capsule that was housed in a building the size of the Astrodome.

“I wasn’t looking forward to climbing 40 stories up, but first I had to pass an eye test,” Anson says. “That’s when I found out that I was colorblind.”

By nailing down copper plates, Anson realized that he could create large-scale wooden sculptures that look like metal, without all the labor and costs of pouring and casting.

Anson always delivers his sculptures locally because he likes seeing where they end up.

“There was one sculpture that I hated, but one guy bought it,” says Anson. “He had a special spot in his back yard that was surrounded by vines on three sides, and when I saw it there, I loved it!”