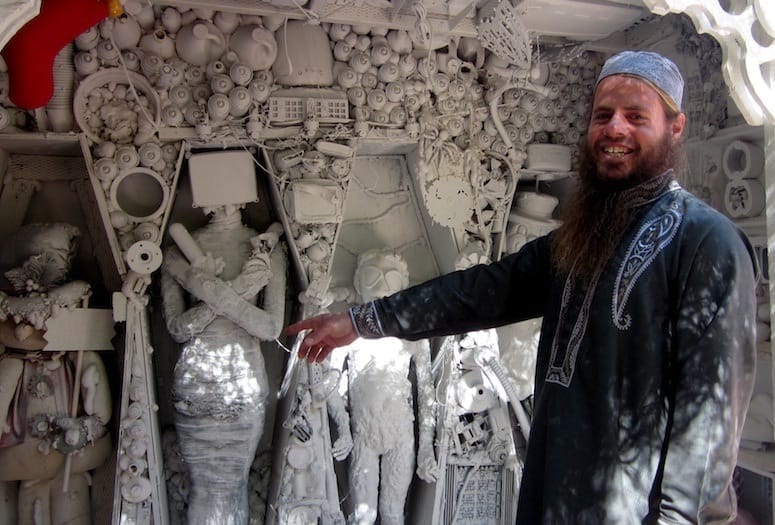 The Movie Colony neighborhood will be dark this coming Christmas holiday season.

Kenny Irwin, whose “Robo Lights” display brought thousands of people to tour his family’s yard and take in one of the most dazzling and unusual holiday decorations, is busy creating a 400-square-foot indoor installation for the American Visionary Art Museum (AVAM) in Baltimore set to open Oct. 5.

“The installation is the artwork,” Irwin explains. “People will walk inside a giant sculpture with 3 to 4 dozen other pieces within it.”

So far, there’s a spaceship that spins and nine ferocious reindeer pull Cyberg Santa’s casino stealth bull sleigh. On the sides are torpedo dove launchers for those on Santa’s ‘naughty’ list. Not real doves, mind you. Irwin, 39, is an animal lover and a man of peace (a Muslim), but his sci-fi comic-book imagination is manifested everywhere.

Irwin has been logging 10-hour days finishing the spaceship installation, including a modified horse carousel (pictured right) that will ride atop. The result is there isn't enough time to put together the holiday lights show.

Irwin explains it this way: “Space travel is a necessity for human to survive. We can recycle and conserve all we want, but we’re going to outgrow this planet.”

Parts that comprise the spaceship for the Baltimore show came from an unlikely source: Fantasy Springs Resort Casino in Indio. Public relations Manager Anndee Lasko had toured “Robo Lights” last year, and thought Irwin could use their throwaway parts. Irwin takes traditional holiday folklore, and turns it on its ear.

“Look at all of those beautiful colors,” Irwin said of Cyberg Santa’s microwave-melted face (pictured left).

Some would consider his art grotesque, even sacrilege.

“Last year one Christian woman was offended by absolutely everything,” Irwin said. “She said that I was a Muslim making fun of Christmas.”

But children see what Irwin sees, and can’t get enough of it.

“Some come three and four times,” said Kenny Irwin, Sr., 83. Funding comes from $10 tour donations, but he has given up his four-acre property to become an amusement park of sorts.

Kenny Sr. compares his son to Renaissance painters who were supported by royalty or the church.

“It wasn’t easy for Michelangelo because he had to paint the Sistine Chapel on his back,” he said.

For the Oct. 5 installation, AVAM is bringing a crane and a truck. The display will remain for an entire year, and Irwin Sr. said the museum is interested in several robots for a permanent display.

WATCH THE VIDEO: Kenny Irwin explains one piece of his upcoming installation.