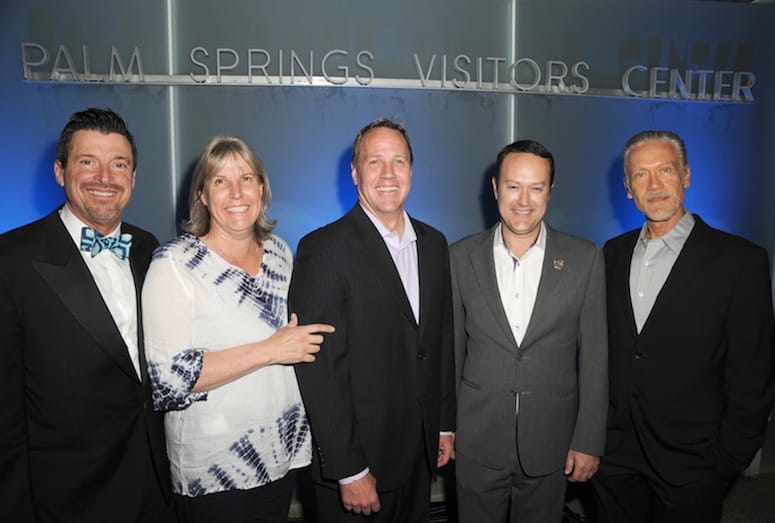 The event, “Mayor Steve Pougnet Invites You to ‘An Evening for Aluminaire’," took place appropriately enough at the Palm Springs Visitor's Center, once the iconic Tramway Gas Station designed by Frey and Robson Chambers in 1965.

“The Aluminaire House, once it is finally home here in Palm Springs, will be a year-round attraction that is perfectly in line with our thriving architectural tourism focus,” says Pougnet. “The house is destined to become a key cultural attraction in our re-developing downtown district.”

The event raised funds for the Aluminaire House Foundation, the non-profit organization behind the project to move the house to Palm Springs. Led by Tracy Conrad, chief operating officer of Smoke Tree Ranch and owner of the O’Donnell House and the Willows Inn, and Mark Davis, Modernism Week director and treasurer, the Foundation plans to erect Aluminaire on land owned by the City of Palm Springs, directly across Museum Drive from the Palm Springs Art Museum.

When it was unveiled in New York City in April 1931, the starkly modern Aluminaire House was an overnight sensation that emboldened an architectural movement. Designed as a case study by architects A. Lawrence Kocher and Albert Frey, the three-story house, which was built in 10 days, became the first all-metal prefabricated house in the U.S. By locating the house in Palm Springs, where Frey lived and practiced from 1935 until his death in 1998, architecture enthusiasts from around the world will have a rare opportunity to view a complete timeline of his work, from 1931 to 1989.

The idea to relocate Aluminaire to Palm Springs began when two architects, Michael Schwarting and Frances Campani, who worked tirelessly to save it, came to Modernism Week in 2014. To an auditorium full of architectural enthusiasts, they presented their story about studying the home for more than 20 years, dismantling it once, reassembling it and then having to dismantle it yet again and put into storage, homeless.

That day, an idea was hatched by Davis, Conrad, Beth Edwards Harris, Brad Dunning and William Kopelk, who thought Palm Springs would make the perfect home.

“I could not be more proud of our committee’s efforts and vision, Mayor Pougnet’s amazing support, and the enthusiasm shown by our community to welcome Aluminaire home," says Davis.

Event attendees received a limited edition, full-size commemorative poster specially created for the event by Gary Wexler Design. Those who become Friends of Aluminaire with a $250 contribution will be listed on the official website and recognized as appreciated underwriting sponsors for the evening.

The Aluminaire Foundation is a 501(c)3 non-profit registered in California and New York. Visit aluminaire.org for more information and to send a donation.