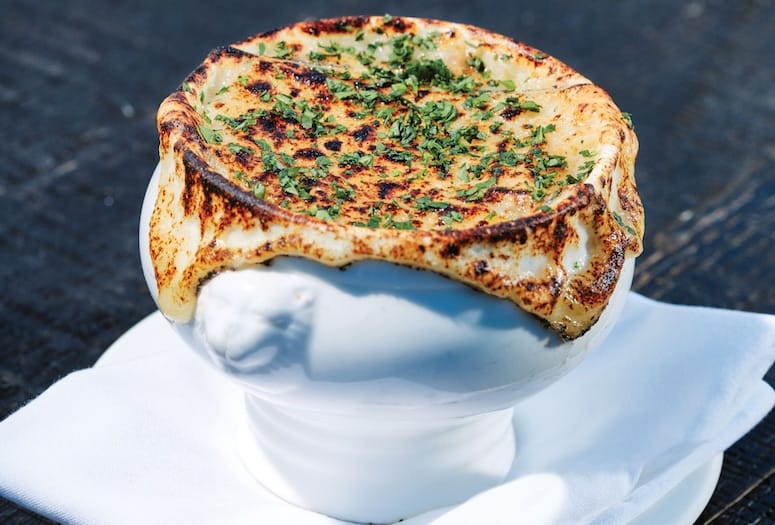 We all have those powerful old-school dishes that can seemingly do anything — transport us back to our childhood, warm us up, lift our spirits. That goes for chefs, too. However, the pros have the benefit of proper training, commercial kitchens, and a penchant for putting new twists on comfort food. If you crave something familiar but not simple, turn to these elevated creations from five innovative desert chefs.

“For me, comfort food is slow food — and that’s really what I embrace,” says the steakhouse’s chef de cuisine Shad Newton, who was raised in the Sierra Nevada Mountains eating “down-to-earth” dishes like black-pepper roasts with root vegetables that his mom, a descendent of dairy farmers, frequently cooked for the family.

“Now, I take all the techniques and everything I’ve learned working in super refined restaurants and apply them to the things I grew up on. I’m stilling doing that food, 100 percent,”

Newton says. Mr. Lyons’ French onion soup falls squarely between comfort and refined. He caramelizes the onions with butter and herbs for a few hours before deglazing them with sherry and Marsala wine. “The goal is to get those sugars out,” says the chef, who adds that the soup’s veal stock base is the culmination of two cooking processes that take almost 24 hours in total.

“A raw onion is bitter but a slow-cooked onion is nice and sweet. We take big-time pride in our veal stock. It’s the base of our bordelaise sauce, too. It’s classic.” He finishes the soup with some crisped-up buttery brioche bread and topped with a mix of Swiss Gruyère and Sottocenere, a truffle cow’s milk cheese. “We brûlée the top so it’s bubbly and browned. The truffle is something different but goes really great with the other flavors.” 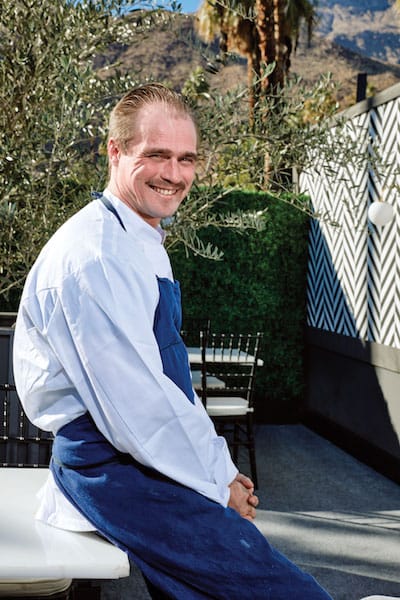 The Tropicale’s best-selling dish originated a world away from the posh Palm Springs patio restaurant inside a staff cafeteria at a New Orleans hotel where Tony Di Lembo, executive chef and owner, worked decades ago.

“There was a woman named Bessie there,” he recalls, “and her sole job was to prepare the staff dinner. Six days a week, it was fried chicken, and I was making it with her for quite a while.”  Bessie’s all-important buttermilk marinade and black pepper-and-paprika-laced flour dredge remains, but Di Lembo, who published The Tropicale Restaurant Cookbook: Comfort Food for a Modern World in 2019, has tweaked the dish to make it more desert-friendly.

His version uses boneless chicken, so that it’s easier and faster to fry in the kitchen and less messy for guests in the dining room. “We still keep the skin on since that skin adds a really nice dimension,” he adds. 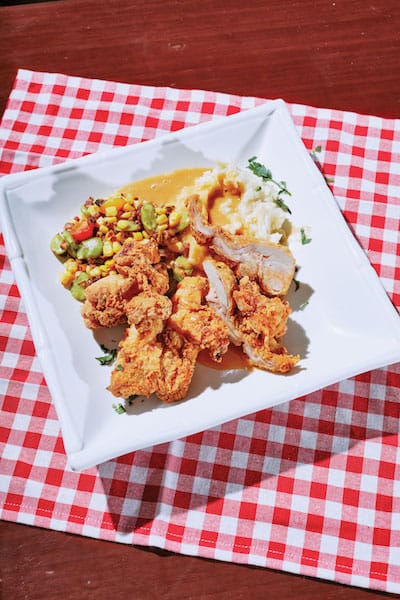 The chicken shares a plate with mashed potatoes and gravy and — after more than a decade of serving it alongside collard greens — Di Lembo recently swapped in a corn, black-eyed pea, and lima bean succotash to put a fresh spin on the side. As for whether Southern California’s famously health-conscious diners have any reservations about digging into such a rich dish: “No,” he insists. “Not even a little bit. People come here specifically for it. Many of us watch what we eat at home throughout the week. When you get here, it’s like, ‘Fuck it. I’m having fried chicken.’” 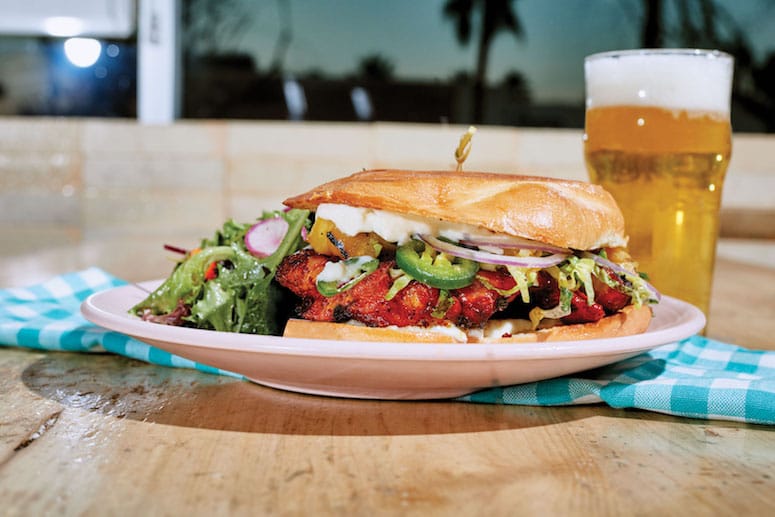 To be sure, the take on the Mexican sandwich at the Ace Hotel & Swim Club’s restaurant veers wildly from the traditional street-food version typically stuffed with chorizo and potatoes, dipped in chile sauce, and fried on the plancha. That’s by design, says executive chef Ysaac Ramirez.

“I thought, ‘I don’t want to do another taco. Let’s do something more creative,’” he explains. “I wanted to take a pambazo and make it fun and approachable for our clientele.” Though al pastor is most often associated with pork, Ramirez and sous chef Ezequiel Bautista came up with a recipe for an al pastor-flavored boneless chicken thigh that’s marinated in an adobo marinade blended with five different chiles, a mix of spices, and vinegar for 24 hours, then grilled to order.

The kitchen sources a Mexican-style Telera bread — known for its signature crusty outside and spongy inside — from Cathedral City’s Taqueria Tortilla Factory, which bakes a custom size for the King’s Highway pambazo. Besides the sandwich’s layers of onion, lettuce, charred pineapple, and thinly sliced jalapeno for kick, Ramirez incorporates some salt-forward Cotija cheese in an elevated way, creating a buttermilk-based crema he infuses with the cheese crumbles.

“My dad is Mexican and my mom is German, and she would always cook tacos and stuff like that but wasn’t hard-core traditional,” he says. “My sous chef is from Guadalajara, so the dish is sort of reminiscent of different things we both grew up eating. To me, comfort food doesn’t have to be greasy food or heavy food, just something that feels comforting and filling and takes you back to your childhood.”

“This dish is reminiscent of what I grew up eating.” 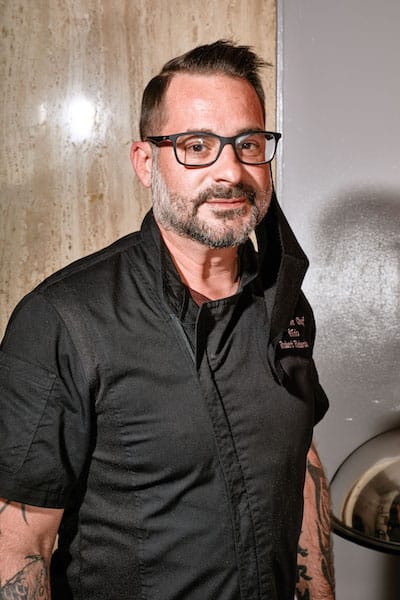 “The beauty of arancini is you can add anything to it.”

These crispy round rice balls may look simple, but beneath that comforting golden-brown crust is the culmination of a lot of work — and a lot of lobster.

The dish starts with a scratch-made lobster stock simmered with lobster heads, mirepoix, and aromatics that are used as the risotto’s cooking liquid. Executive chef Rob Richardson tosses in fresh knuckle and claw meat; molds the mixture into balls; dredges them in egg, four herbs, and panko; and then sets them before flash-frying to order.

“I’m a Southern boy, so comfort food, in my opinion, is something you work quite a bit of the day on and have to take care of,” he says. “The risotto is slow-cooked and constantly maintained to make it perfectly creamy. Rice is rice, but really good rice has to be paid attention to and nurtured.”

Though traditional Italian arancini rice balls typically include meat or cheese, Trio’s variation offers elegance and an element of surprise thanks to that hidden shellfish. “The beauty of arancini is you can add anything to it and change the flavor profile,” Richardson says. “But this way, you get the creaminess of the risotto, all the flavor from the stock, and those chunks of lobster. And who doesn’t love lobster?” 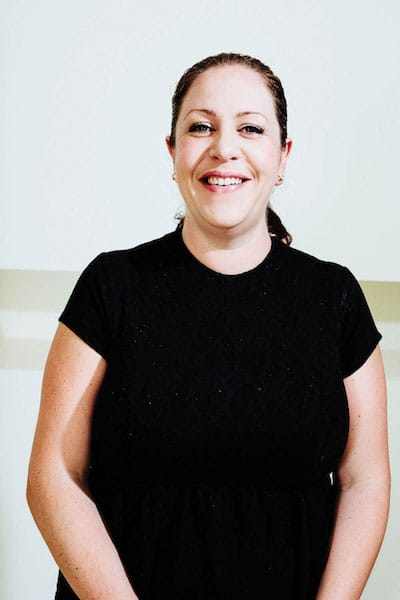 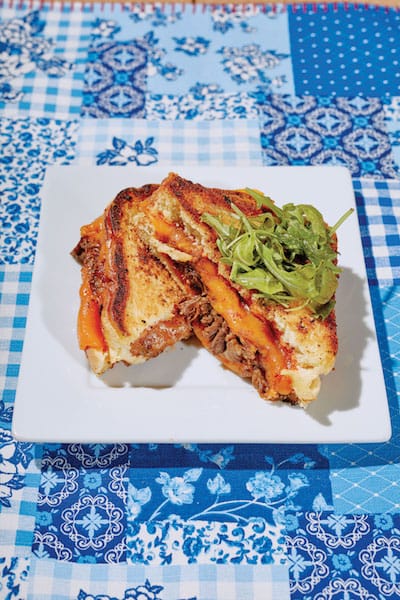 “Braised short rib is the ultimate luxurious item to add to grilled cheese.”

“Anything with melted cheese is comforting to me,” says executive chef and owner Andie Hubka, “and grilled cheese is one of my favorite things.”

Though she grew up eating her mom’s traditional grilled cheese paired with tomato soup, Hubka started testing variations on the sandwich while working her way through culinary school. “I’d get home after a 16-hour day, and I would make myself a grilled cheese sandwich, but I’d make it fancy,” she recounts. “I’d put goat cheese and mushrooms [in it]. I always played around with the trope of the sandwich.”

When the chef crafted Cork & Fork’s first menu in 2012, she wanted to include her dream grilled cheese, sticking with a classic sharp cheddar, while enriching the item with grown-up ingredients that serve double duty as comfort food. “When I think of meat that’s comforting, I think of braised short rib. It just takes on so much flavor with that long, slow cook time,” Hubka says. “And it’s the ultimate luxurious item you could add to a grilled cheese because you wouldn’t take all that time at home to braise short ribs just to put them in a grilled cheese sandwich.”

With the meat and melty cheese down, she conjured up a smoky tomato jam that she slathers on the Texas toast. Then, she tops it off with truffle oil-tossed arugula for a pop of green. The result is an avant-garde sandwich that has become Cork & Fork’s very own classic. “We change the menu all the time but this is something we can never take off,” Hubka says. “People love it so much.”

• READ NEXT: 6 Coachella Valley Chefs Share Recipes You Can Try At Home.