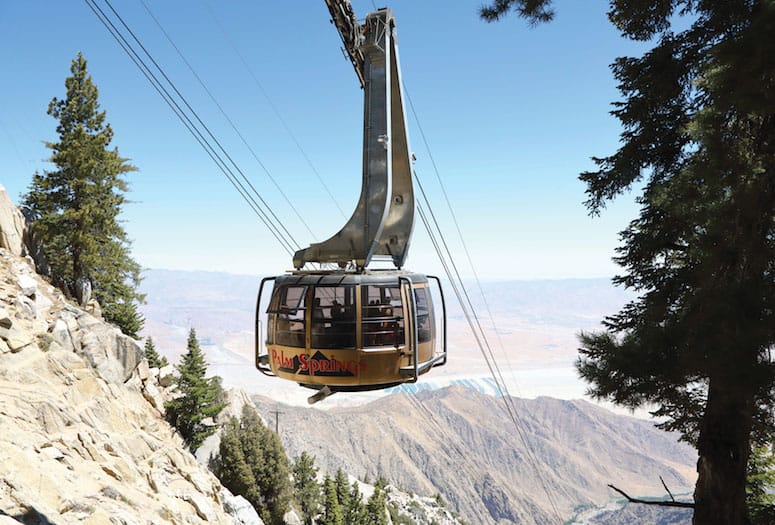 The engineering marvel that is the Palm Springs Aerial Tramway all started in 1935 when one man imagined escaping the desert’s heat atop San Jacinto Peak.
PHOTOGRAPH COURTESY PALM SPRINGS AERIAL TRAMWAY

Learn and Create
Playing and learning collide at Children’s Discovery Museum of the Desert, where more than 60 hands-on activities allow kids to experiment with arts, crafts, cooking, and science in a compelling indoor-outdoor educational space set on 6 acres. Build a race car, create a pipe maze, whirl around the trike track, or try your hand at mixing and stirring ingredients to make mini pizzas or watermelon-mint sorbet. cdmod.org 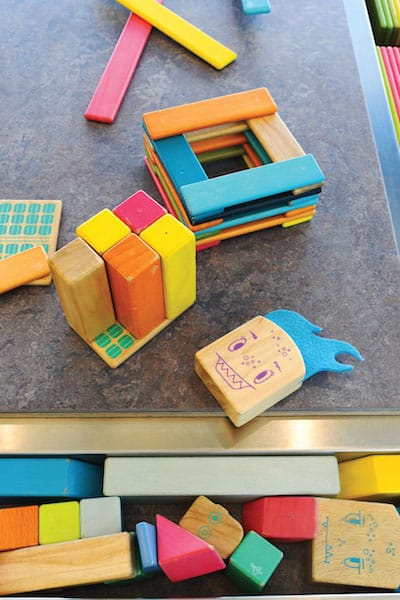 Children’s Discovery Museum of the Desert.

Explore a Date Farm
Shields Date Garden has been operating since 1924, when original owners Floyd and Bess Shields arrived in the Coachella Valley from the Midwest. Begin with brunch at the on-site café — the menu touts California cuisine with Mexican influences. Let the kids roam the palm groves and garden and chase ducks by the lake, then order a famous date shake to tide you over as you head to your next adventure. shieldsdategarden.com

On the Prowl
A maze of desert flora winds around The Living Desert Zoo and Gardens. At daybreak, catch the resident creatures at play, stretching and prowling after breakfast. Hop on the shuttle for a guided tour through the wildlife park to see the popular sites, or sign up to feed the giraffes. The Living Desert hosts ZooCamp weekly from 8 a.m. to noon, June through July, for children ages 4–12. Themed weeks include outdoor activities, arts and crafts, and behind-the-scenes adventures with animal keepers. livingdesert.org 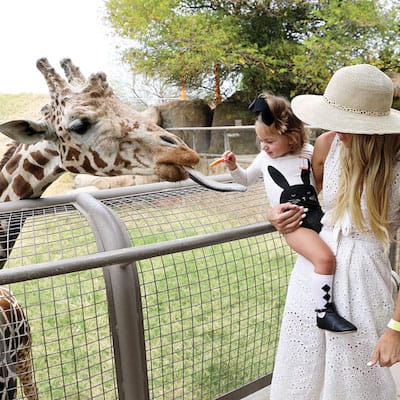 The Living Desert Zoo and Gardens.

Take Flight
Bob Pond made his living engineering machines to install terrazzo floors in his native Minnesota, but in his adopted home, Palm Springs, he was known for three things: his idyllic 12-acre estate near the Indian Canyons in South Palm Springs, his collection of vintage automobiles, and founding Palm Springs Air Museum. The museum houses 59 World War II and Korea/Vietnam-era military aircraft. Many still fly, and some museum docents actually piloted the planes during the wars and share captivating stories during discussion events. psam.org

Travel by Tram
The engineering marvel that is the Palm Springs Aerial Tramway all started in 1935 when one man imagined escaping the desert’s heat atop San Jacinto Peak. That daydream became a blueprint for the tram, which opened in 1963 and now boasts the world’s largest rotating tram car. A 10-minute ascent affords breathtaking views of the San Jacinto Mountains and whisks you to breezier climes (often 30 to 40 degrees cooler than the valley floor). Passengers travel through five climate and ecological zones to reach the picturesque Mountain Station, where the whole family can explore the forest on more than 50 miles of hiking trails. pstramway.com

Dig Into History
Coachella Valley History Museum holds the keys to two of the area’s oldest buildings — the 1930s Smiley-Tyler House and the 1909 Indio Schoolhouse. It’s also home to the world’s only date museum, containing archives of the fruit’s origins in the Middle East, its early 1900s introduction to the Coachella Valley, and modern-day agricultrual records; a working date grove neighbors the property. cvhm.org

Find Your Escape
If you’ve ever watched a heist movie and wondered how you’d fare somersaulting your way through a high-tech security system of infrared laser beams to crack a secret vault, your François Toulour moment has arrived. With six themed rooms available for private parties, the interactive Escape Room Palm Springs facility is the largest of its kind in Southern California. Two to 10 players get “locked” in (the door is never actually locked, and you can leave at any time) and must work together to look for clues and solve a series of puzzles to complete an objective. In addition to the bank heist option, themes include vampires, magic, and the Titanic. escapeps.com

Ice Capades
As the sun sets, the disco ball drops at Desert Ice Castle, the area’s only year-round ice-skating rink. Anyone 3 and older can channel their inner Tara Lipinski during two-hour public sessions. The facility employs Olympic figure-skating coaches and actual Ice Capades performers who are available for private sessions; they also offer group hockey, skating school, and an intensive-training summer camp. deserticecastle.com

Laser Bowling
When the competitive spirit strikes, round up the fam for a night at Fantasy Springs Resort Casino’s 24-lane bowling alley. Fantasy Lanes is a standard ball-and-pins hall with all the trappings that make bowling night great: a bar for the parents, an arcade for the kids, late-night lasers, and bumpers for the really little guys. Weekend party packages include cake, ice cream, and pizza. Calling ahead for lane availability is recommended, especially for laser bowling. fantasyspringsresort.com

Movie Night
Catch a flick on the big screen at Mary Pickford Theatre and kick back in a state-of-the-art facility with lounge-style seating. Some theaters feature comfortable recliner chairs, while others have D-Box motion-simulator seats that rock and vibrate in tandem with the on-screen action. June 11 through Aug. 2, there are eight special kids’ screenings (playing every Monday to Thursday) for only $1 each or $4 for entry to all eight films. dplaceentertainment.com 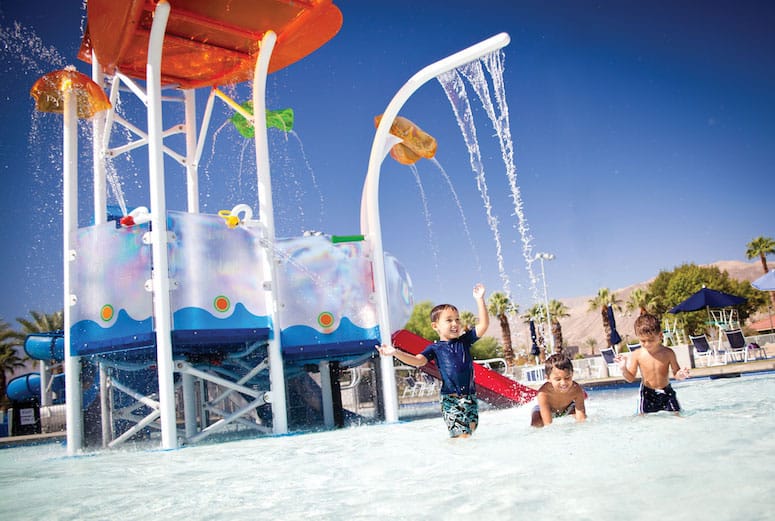 Omni Rancho Las Palmas Resort & Spa
This resort in Rancho Mirage has its own Splashtopia waterpark with two 100-foot slides, a lazy river, and a beach. omnihotels.com

Palm Desert Aquatic Center
This community center on 8 acres has three pools for lap swimming and recreation, multiple slides, and a “sprayground.” pdpool.com