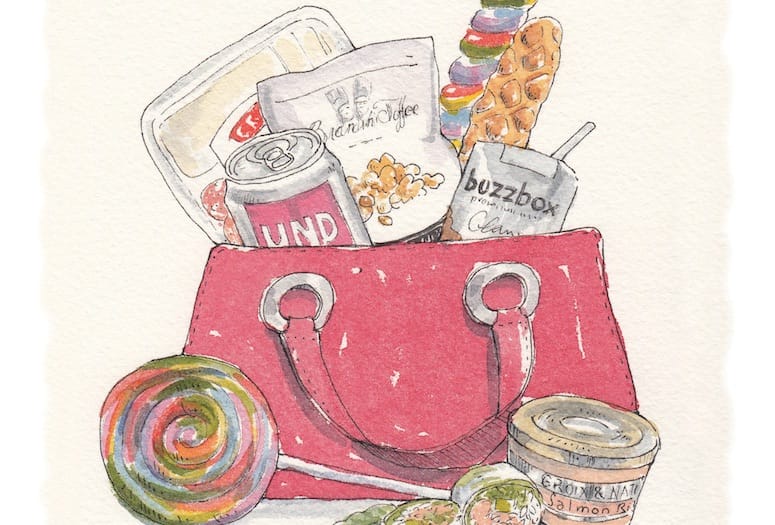 For the occasional movie outing, a tub of butter-drenched popcorn and a box of Milk Duds usually does the trick. But for fanatics packing schedules with back-to-back flicks during the Palm Springs Film Festival, there’s reason to look beyond the concession stand.

While we don’t normally condone breaking the rules, once in a while you simply need a better movie snack. These Palm Springs spots offer gourmet items you could (completely hypothetically, of course) stash in your bag for superior mid-movie noshing during the Palm Springs Film Festival.

No trip to the theater is complete without some candy, obvs. Try a blast from the sweet-tooth past at this retro candy store offering everything from Willy Wonka–worthy Whirly Pops to Moon Pies. The shop also offers a serious array of taffy, including wackier flavors of red velvet, mojito, and maple bacon. See related story: Rocket Fizz Offers Blasy From the Past Candy, Soda

Grab gourmet goodies on the savory side at this new Uptown Design District fine foods shop opened by former Trio co-owner and chef Mark Van Laanen. A Creminelli Fine Meats duo-pack of uncured nitrate-free Italian salami and Spanish manchego, along with some artisanal crackers (Van Laanen recommends the all-natural Jilz Crackerz made in Ventura, California), makes for a mobile, mini charcuterie plate. Or amp up the decadence with a pocket-size jar of Groix & Nature seafood rillettes from France’s seafood-centric Brittany Coast. The pâté is available in traditional salmon and trout, but there is also a lobster version spiked with French curry (Kari Gosse). This should be paired with Italian Bello Rustico breadsticks. “They’re easy to dip,” says Van Laanen, ”so you get a little crunch and the richness of the rillettes at the same time.”

The pan-Asian eatery whips up fresh rice paper–based spring rolls to order and slices them into six sushi-style pieces, making them the perfect film fest finger food. Go for the vegetarian mango summer roll. “We serve it chilled, but if you waited awhile to eat it, it would still be just great at room temperature,” says chef and owner Chad Gardner. The roll is served in an eco-friendly box with a ginger-tamari dipping sauce. In addition to fresh mango, the spring roll’s stuffed with crunchy vermicelli, cilantro, mint, house-pickled ruby cabbage, carrots, and daikon radish and will most likely make you the only person in your row to actually be nibbling on fruits and vegetables during the screening. See related story: Wok and Roll with Sizzle

Let’s just admit that we’ve been dumping candy into our movie popcorn for years now, so might as well do it the right way with a pouch of this local company’s Chocolate Almond Toffee Popcorn — a savory-meets-sweet snack that tosses the classic corn with roasted almonds and Brandini’s signature buttery toffee before drizzling it with dark chocolate. For non-chocolate lovers (who are you?), there’s also a Cashew Almond Toffee version. See related story: Made in the Coachella Valley

This local hot dog shop offers plenty of good old-fashioned franks, sausages, and sides to go (including a housemade vegan dog), but owner Tristan Gittens recommends the chicken-and-waffles (on a stick!) for taking on the road. It’s actually two chicken sausages wrapped in housemade Belgian waffle batter and then cooked in a specially outfitted waffle maker and served with maple syrup. And since it was one of the dishes Gittens made with Guy Fieri during a recent Diners, Drive-Ins and Dives episode on Food Network, it’s definitely ready for its film festival close-up. See related story: 5 Best Places for a Hot Dog

Sneaking in a flask of booze just feels a little lowbrow. Instead, pick up one of the beverage shop’s ever-growing offerings of wine-in-a-can, each equating to a half bottle. The Underwood label, produced by Oregon-based Union Wine Co., comes with a liner in the can that prevents the aluminum from contacting the wine. The pinot noir, rosé, and pinot gris are solid options. If it’s a cocktail you’re craving, you can grab a BuzzBox — a locally made adult version of a juice box touting ready-made cosmos, margaritas, and even Long Island iced teas that come complete with little straws for stealthy sipping.