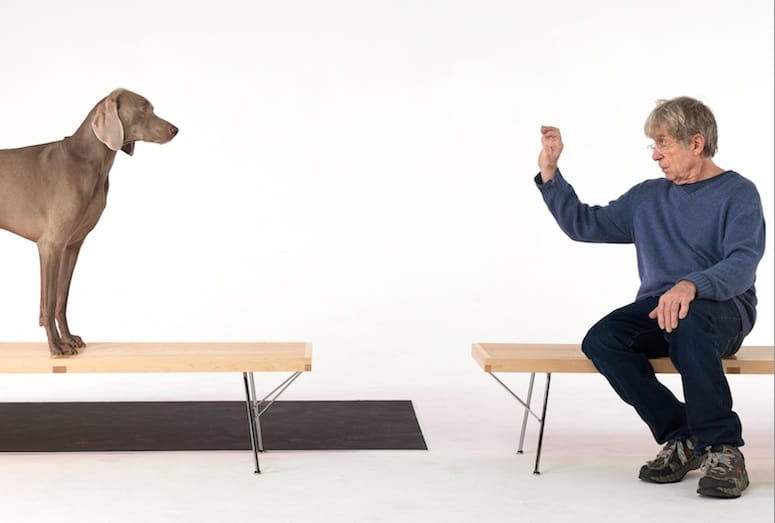 Every time he looks at his Weimaraner dogs, celebrated artist William Wegman asks the question, “What can we be today?”

The answers have been the subject of Wegman’s artwork, dating back to the 1970s when his first of the breed, Man Ray, became his studio muse.

“Their nickname is ‘grey ghost’ and they have pale yellow or blues eyes that are weirdly florescent. They inhabit my mind as ghosts allowing me to create stories for them,” he says. The famed photographer and painter has worked with this “ghostly” breed to create his masterpieces, fondly referring to his inspirations as “my pets and my art partners. “

Wegman’s photos, paintings, and books showcase a body of work that follows the legacy of his Weimaraner family ancestry, integrating with his own life in a symbiotic relationship.

“My dogs are always with me,” he says. “They are interesting because they take on the color of their surroundings. Their reflective grey color makes for a great canvas – a neutral blackboard to write sentences.”

Wegman will be a featured artist represented by Imago Galleries at the 2015 Palm Springs Fine Art Fair, Feb. 12-15, at the Palm Springs Convention Center.  He will also be honored with the Photographer of the Year award, as a further distinction among the 60 galleries and 300 artists on display.

Wegman’ skillful ability to transform animals into different settings posing in costume or as people has been a labor of love. “Dogs are amazingly cooperative partners,” he says. “They let you position them and let you contemplate them. I find this addictive. I love handling them and gently helping them out. They are tactile and fun to work with.  Animal transformation has always appealed to me. They evolve as the beautiful canine creatures that they are. I’ve worked with a lot of other dogs, but they are not transformed into another being like the Weimaraners.”

Worst dog breed to work with: “The Taco Bell ad dog (photographed for Esquire Magazine). That Chihuahua did not want me to photograph it.”

Awkward moment: “I photographed ‘Lassie’ but I could not address the dog directly. The trainer had to give commands.”

Favorite photo:  “’Lolita’. My dog, Batty, posed on a director’s chair and she was a knock out. It was so unexpected and surprising. I sold it, but I wish it were mine.”

Wegman has selected a special series of photos for the Palm Springs show titled, “Nice Dogs on Good Furniture” with his two youngest dogs, Flo and Topper, staged on borrowed Herman Miller furnishings.

“My wife  (Christine) came up with the concept and I was inspired by the challenge of this project,” he says. “(This theme) also seems to resonate with Palm Spring’s midcentury modern aesthetic and its love of dogs. The dogs are sculptural, pretty, and expressive as their bodies interact with the different pieces that were not meant or built for them. It’s a colorful, happy, cheerful group of pictures…the dogs look like they enjoy it!”